The budget should have clarity on industrial investment, consumer spending, unemployment, the agriculture sector and how the accounting will work for the finance minister's infrastructure plan.

With less than two weeks left for the FY’20 Union Budget, finance minister Nirmala Sitharaman has the painstaking task of ensuring that it injects confidence into India’s economy.

Over the years, Union Budget announcements in India have become more of an annual media spectacle with less attention paid on the merits and details of the actual financial statement. The speech is instead viewed for ‘big ticket announcements’ and what it says about the state of economic policy-making at the Centre.

Most analysts agree that last year’s Budget was a wash-out that served as a double whammy on top of a slowing economy. That’s why this time around, the Budget is critical not only for any major announcements, but also for the signalling effects that it is likely to carry for each concerned stakeholder of the Indian economy.

In addition to industrialists and members from the corporate fraternity, even common citizens are likely to be affected by the fiscal measures announced.

The five charts below paint a picture of the economy’s failing growth engines – a situation that Sitharaman will want to reverse this year, with the Budget proving to be the first step. 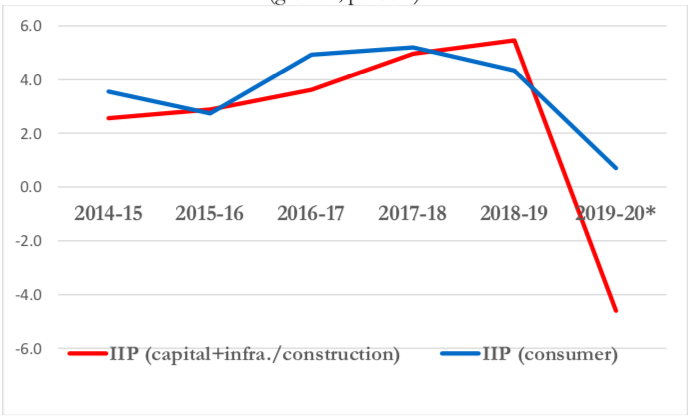 India’s industrial performance, in terms of production of both capital and consumer goods, is perhaps at its worst since the crisis of 1991-92. Those were the days of extreme industrial protectionism combined with the bureaucracy of license raj. It is a very different context today, considering most industrial sectors have access to domestic and foreign capital and are better connected with market forces. Still, productivity levels have been low and have worsened since 2018-19 (seen in Chart 1), whereas in recent months, the industrial sector has almost stopped investing in building new capacities within existing businesses due to a fall in demand.

In terms of steps taken, the finance ministry’s decision to cut corporate tax rates haven’t yielded a positive boost to overall industrial production in the short-term so far. Within sectors like construction, which has been one of the largest worker employing segment (particularly for migrating workers), most firms are currently choked with higher tranches of debt or are otherwise unwilling to invest long-term capital due to low consumer demand.

At the same time, steps to fiscally support existing infra-projects instead of creating a space for new investments may prove to be far more effective. Announcements on new projects take a longer period to get started and getting new contracts, acquisition of land etc. may do little in reviving industrial growth immediately.

Chart 2: Stagnation in Agricultural Output and Income Growth (% of GDP) 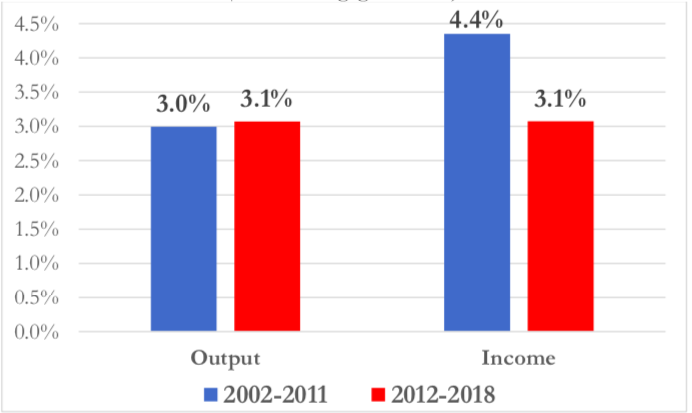 The second, and perhaps most important concern in the Indian economy right now is a poorly performing agricultural sector. Chart 2 above shows how agri-incomes have actually come down to 3.1% of the GDP as against being at 4.4% between the 2002-2011 period. Agri-output has been more or less the same in two decades now. A poorly performing agri-sector has been one of the principal reasons for driving down rural consumer demand or even pushing more and more people (including farmers) into poverty as cost of living continues to rise.

In steps, the finance minister, for one, can announce an expansion of PM Kisan Yojana to bring more farmers under the ambit of a direct income transfer plan assuming that announced outlays are promptly translated into outcomes and disbursements are ensured to targeted farmers in the shortest span of time to increase rural consumption.

Arun Jaitley, the finance minister in the Narendra Modi government’s first term, focused extensively on higher allocations for the agri-sector. However, most of these announced benefits, including the crop insurance scheme were riddled with severe bureaucratic sludge (due to delays in fund disbursements) and helped in only marginally reviving the farming landscape. From the perspective of the Union government, it is also important to acknowledge how most agricultural reforms ultimately require deep state-level interventions. The current Budget gives an opportunity for the Centre to bank more on states through a cooperative federal framework to ensure the agri-reforms it seeks, rather than trying to do this through a centralised channel.

A GST-type federal body perhaps could be constituted, which would specifically address the economic concerns of the farming community and take targeted measures to improve market-access for theme.

On the fiscal side, substituting agri-based subsidies with beneficiary based direct transfers is another major step while leveraging PM Kisan, and something that Arjun Jaitley envisaged to achieve, that also needs a greater (more urgent) attention now. It can help the Centre reduce some of its fiscal (subsidy) expense when overall revenues (from tax and non-tax receipts) are low.

Next, comes the export sector.

For any increase in basic agricultural and industrial productivity to benefit the macro-economic landscape, a robust ‘farm-to-factory’ supply channel remains vital for the manufacturing sector to also benefit from rise in production of agri-based commodities. As observed previously, India’s significant leverage in domestic production has been in its cooperative style of business across states (as seen in cases of sugar, dairy, textiles, micro-finance to cite a few).

An announcement with a targeted promotion for development of ‘Commodity-based Cooperatives’ (CBCs) to encourage small and medium scale cooperatives may not only help in providing a ‘self-sufficient’ environment for food, clothing and financial needs for almost a 1.3 billion population base, but can also add great export value for India’s expansion in regional and neighbouring export markets. A critical area where Indian export potential (and demand for its products) has remained high but supply-side bottlenecks have inhibited its rise is in the textile and clothing segment. A more explicit focus on these through fiscal policy interventions and creation of better connected trading zones for suppliers to have easier access to the export markets (especially in neighbouring countries) can help not only in boosting exports, but do so by generating higher employment for workers. 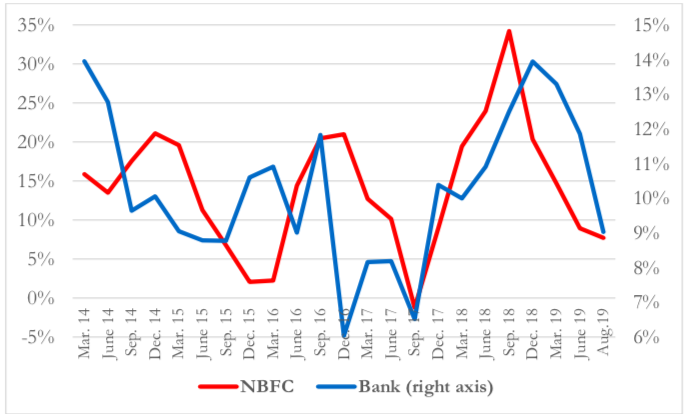 On banks and the current troubling scenario of credit growth levels, even for NBFCs, the Budget statement may highlight the necessary fiscal plan for already announced measures during the last few months. A substantive amount of liquidity is being pumped in the public sector banking system and the source of funds going into the financial system may need to be transparently reflected in the government’s fiscal statement.

For example, the finance minister, a few months ago, announced a ‘last-mile window’ package of Rs 20,000 crore with a target to benefit around 3.5 lakh homeowners. While the government said it would contribute around Rs 10,000 crore to this fund, investors like LIC, Development Finance Institution (DFI) and sovereign wealth funds are likely to contribute the rest of the Rs 10,000 crore. Similarly, last month, the Finance Minister made a similar sector-specific announcement, that is, of the National Pipeline Fund for Infrastructure, for financing infra projects up to Rs 102 lakh crore in collaboration with private players. The fiscal details of financing these are still not clear and thus, require a clear accounting explanation which this year’s Budget ought to do.

Chart 5 (a): Unemployment and Unemployability 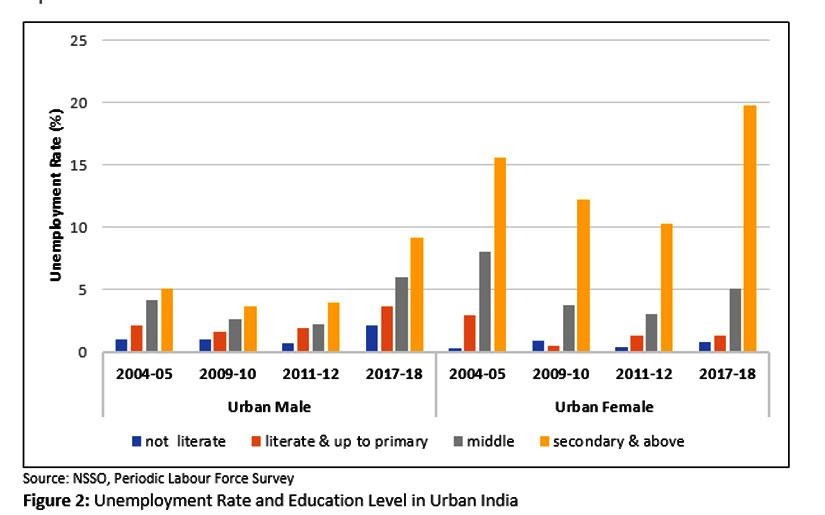 Chart 5 (b): Unemployment and Unemployability One of the other major concerns, reflected by the recent data from Periodic Labor Force Survey and even CMIE data, is the growing level of unemployment and a higher degree of unemployability amongst the educated youth, in both, rural and urban areas. Females, in rural and urban sections, have been worst affected by the unemployment and unemployability crisis. While this is a structural problem with no quick-fix measure to resolve this, still, a comprehensive fiscal plan (and its announcement) will signal a strong intent by the government to both acknowledge and address the unemployment problem.

An explicit budget sponsored signal promoting women safety and mobility – at the rural, urban and inter rural-urban connectivity levels – will be a huge boost for not only enhancing overall economic productivity but also act as a catalyst for employers to hire more women in sectors where women work participation has stayed low. A strong case can also be made for increasing the number of ‘working-women hostels’ and promoting ‘exclusive transport for working women’ across urban spaces through a Union funded budget scheme.

Two other significant areas where fiscal support from the Union government can help improve ‘employability’ of women, especially for those entering the workforce after completing graduate-level education, include increasing public funding for existing and new girl-enrolled schools and colleges across states and by creating fiscal provisions for subsidising ‘care services’ and incentivising employers to build a more ‘care-sensitive infrastructure’ to aid working women with children. Some of these measures, from enabling easier mobility to ensuring a more safe working environment for women, shall go a long way in signalling a positive message to promote and encourage greater workforce participation of women in organised sectors.

Addressing these five charts through a focused approach in this year’s budget can at least help catalyse the recovery process and crowd-in a wave of economic optimism for all stakeholders engaged in the Indian economy.