Budget 2020 May See Even Official Fiscal Deficit Targets Loosened, but by How Much?

Boosting non-tax and tax revenue is the best option to contain the fiscal hole, but both are unlikely to pan out in any meaningful way.

The Indian government over the last six months has admitted that the economy is in a deep slowdown though not in a recession. It has taken steps since August 2019 to rectify the situation but they haven’t quite yielded the desired results.

The first was to draft the Reserve Bank of India (RBI) to help by reducing interest rates both by repo rate cuts and what is called ‘Operation Twist’. The central bank also had to part with a huge amount of its reserves to help the government reduce its burgeoning fiscal deficit.

One of the big steps the government itself took was to cut corporate tax rates to boost profits. That did initially boost corporate profits, which led to a small boom in the stock markets. Foreign investment came in, lured by high profits.

But did the economy revive? Not in a meaningful manner yet.

Projections of growth have been revised downward by the government and the RBI. The latest to pull down India’s growth numbers is the IMF.

ADB and the World Bank and others are likely to follow suit. It’s true that most of these global agencies are behind the curve – they have reduced growth rates much after it becomes clear that the rate is lower than their projection.

Anyway, these institutions are not independent data collecting agencies and take their basic data from the government. Hence their projections are fairly close to the government figures and if the government data is erroneous, so are their figures.

Also read: Does India Really Know What its GDP Is?

Since the unorganised sector cannot be assumed to be growing at the same rate as the organised sector – an assumption in the methodology – the GDP numbers are incorrect. Alternative data suggests that the former has been declining and growth is currently negative. The government, and most experts, insist on closing their eyes to declining GDP and instead wish to operate only with the organised sector data.

In the full budget for 2019-20, the Narendra Modi government – having obtained a thumping mandate and thus somewhat in denial of the deteriorating economic situation – did little to help revive the economy. 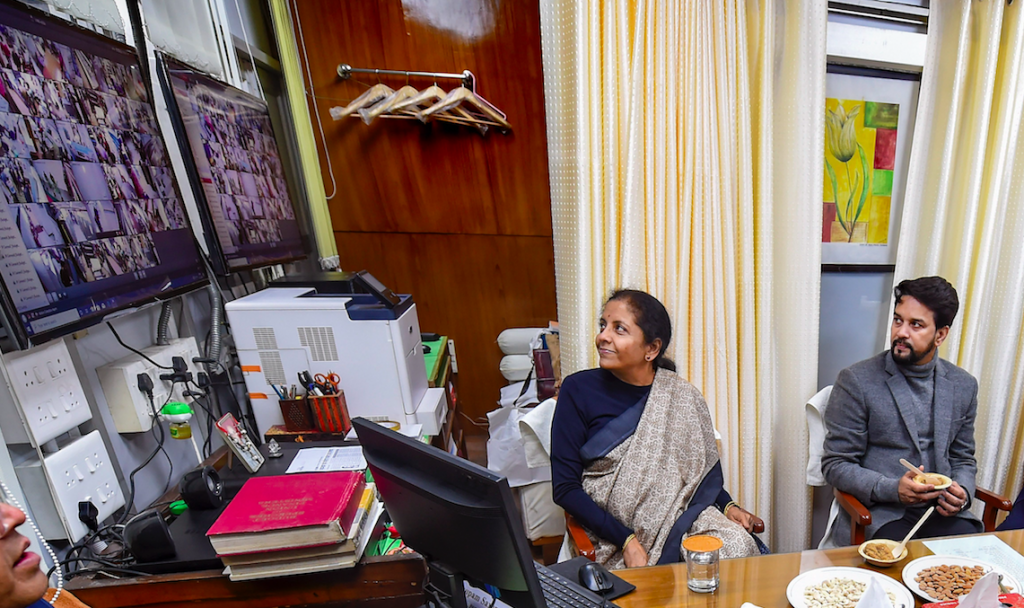 Finance Minister Nirmala Sitharaman (centre), Minister of State for Finance Anurag Singh Thakur and others after the Halwa ceremony marking the commencement of Budget printing process for the General Budget 2020-21. Photo: PTI

In fact, the organised sector was unhappy with some of the steps taken and the stock market declined and foreign investors withdrew money. As more and more data showed that the economy was doing poorly, the government initiated measures to boost the organised sector.

A cut in corporate tax rate came quickly, followed by a package for recapitalisation of banks, a separate package for real estate sector, concession to foreign investors and so on. All of it in quick succession. While well-meaning, most of the steps meant that expenditure would rise even as revenues registered a meaningful shortfall.

The fiscal deficit also was higher because the government projected nominal GDP growth incorrectly at 12%. This was also the case in the 2018-19 budget. So, the revenue collection in 2018-19 was less than projected and to prevent the fiscal deficit from rising, expenditures were cut which then further aggravated the demand problem. On these incorrect figures for 2018-19, projections were incorrectly made for 2019-20 assuming 12% rate of growth while it is turning out to be around 7%. Due to this double error, now the fiscal deficit is turning out to be even higher. To keep to the artificial target of fiscal deficit to 3.3% of GDP, again expenditure cuts have been initiated and that is aggravating the slowdown.

In brief, the government had little fiscal space in 2019-20 and that too was frittered away by giving concessions to the organised sector. So, the steps required to be taken to boost the economy could not be taken. That is the root of the problem facing the coming budget.

Further, as argued earlier in these columns, the real fiscal deficit of the government is not just of the central government but also of the states and the public sector.

They need to be added up. Due to the lower amount of taxes collected by the Centre, the transfers to the states (they get 42% of it) will be less and their deficit will be higher. Further, since the central government has been shifting some of its borrowing to the public sector, their deficit would also be higher than anticipated. Including all three, the current level of the fiscal deficit, assuming no expenditure cuts, would be close to 11% of GDP.

Two issues arise. How much more deficit can the system take and why is the economy slowing down in spite of such a large deficit? The deficit is certainly giving a boost but not enough to counter the slowdown emanating from the unorganised sector, which is where the problem originated.

The Union Budget is about 15% of GDP and most of the expenditures are committed so that it has limited leeway to give fresh impetus. Within these limitations, the government has two options to raise demand. Either to allow the deficit to rise further or to increase tax collections and spend without raising the fiscal deficit. It can also do both.

Currently, a larger deficit will boost demand without hurting the economy. There will not be a generalised inflation since there is spare capacity. Sectoral inflation due to supply shocks like, in the case of food items due to extreme weather phenomenon or due to oil crisis is possible. Further, private sector investment will not be preempted since the private sector is flush with funds and banks have excess funds which no one is taking.

Further, as the economy expands, more savings will be generated. Hence there is no chance of a crowding out of private investment which can happen if the economy is running at full employment (not the case currently). Another possibility is to cut income tax for lower income slabs and allow the fiscal deficit to rise. But this will not be as efficient in raising demand as increasing expenditures.

Or, if the government is averse to a higher deficit, it can tax those who have made large gains in the last 30 years, leading to one of the highest levels of inequality in the world. They can be taxed via wealth tax, gift tax and estate duty. Even if only 5% of the wealthiest in the country are taxed at an average of 1%, more than 1.5% of GDP can be raised.

Further, this will also help reduce the size of the black economy so that even more tax revenue will accrue. This money can be spent on employment generating schemes, on social infrastructure and in rural areas. It would also provide income support to the unorganised sector. Demand would immediately revive, without the fiscal deficit rising. In fact, as growth picks up, tax collections will rise and the deficit would decline.

The rich would like the government to curtail the deficit by disinvesting in a big way. Some are suggested that government assets like land be sold. This would help the rich avoid paying more taxes.

But neither of these two will help raise substantial resources immediately since the private sector will not buy loss making PSUs unless they are sold at throwaway prices. Not much land will be bought when most real estate companies are stressed and the real estate markets are in stasis. Further, these sales will only amount to transfer of assets without raising investment in the economy or demand. So they are not the solution.

The second option of taxing and spending is the best but the rich would oppose it even though they will recoup more than the additional tax they will pay.

Tim Cook of Apple has recently said that corporations should pay more taxes since the system is unfair. George Soros has also argued that the American rich ought to pay more taxes if capitalism is to survive. This also applies to the current Indian situation. Leadership is required to push these difficult policies but given the present situation in the country where the leadership is wholly engaged in managing the ongoing political turmoil, is there much chance of that?