Will the Budget’s Charm Offensive Quell Distress Before the General Elections?

There is some over-optimism about increased government revenues next year, but in an election year budget that's the least of the Centre's concerns.

Acting finance minister Piyush Goyal presented the Interim Budget for 2019-2020 which is no less than a full budget with a finance bill to implement the changes in taxes announced. There was much confusion as to whether the budget would be a full budget or a ‘vote on account’ to carry on the business of governance till the new government takes over in May end and presents the full year’s budget at the end of June or July.

Be that as it may, it was expected that the budget, coming just before the general elections, would try to woo voters who seem to be disenchanted with the performance of the ruling party, the BJP, which faced losses in the recent round of assembly elections. It is also clear that farmers, young people struggling for employment and micro and small sector businesses facing trouble have been increasingly dissatisfied. They all have been agitating. Minorities and Dalits have also been unhappy and reports of growing inequality have added fuel to the fire.

Also read: In Modi’s Budget Bouquet, Roses Only for the Election

So, it stood to reason that the budget would try to appeal to these sections. Even if not much can be implemented in the remaining time of this government, there is no harm in announcing attractive schemes for disaffected sections of society. This is precisely what the budget does, even if its arithmetic seems to be faulty.

The first priority was to give to the farmers since they have been not only facing a crisis, with their incomes collapsing after demonetisation in November 2016, but are also the largest chunk of voters in the country. Farmers holding land below five acres will be given Rs 6,000 per annum. They fully deserve it. An allocation of Rs 75,000 crore has been made for this scheme. Along with this, there are other announcements for these sections.

The middle class is another big constituency. They have been given relief in income tax if their income is up to Rs 5 lakh. There are other concessions and deductions and if all that is also added then tax need not be paid on incomes of Rs 6.5 lakh and more. That is, for an income of up to six times the per capita income, this tax need not be paid. Along with this other concessions have been announced.

In effect, there is an additional requirement of about Rs 1.5 lakh crore of revenue to cover these schemes. It is not spelled out how these resources would be obtained. In the current year, Goods and Services (GST) collection was short by Rs 1 lakh crore. Given the problems it is facing, it is not clear that next year it would rise by Rs 1.2 lakh crore. Both income tax and corporation tax are slated to rise by about Rs 90,000 crore each. Is this likely with the concessions for the middle classes?

There are also schemes, like, pensions for the small and cottage sectors which are facing a crisis due to demonetisation and the structurally-flawed GST. However, the money allotted is inadequate to give the kind of contribution that the government is to make.

Rs 60,000 crore is allocated for MGNREGA. This is a scheme that has helped mitigate the crisis in the lives of the unorganised sector workers who lost jobs in cities and migrated back to the villages. However, this year the expenditure on this scheme is supposed to be about Rs 65,000 crore, and by all accounts it is inadequate and more funds are needed.

Increase in allocation on capital account is only about 6.5% which is inadequate if the economy is to be revived through public investment. All in all, the budgetary arithmetic is dubious – increases are at the expense of some essential requirements. 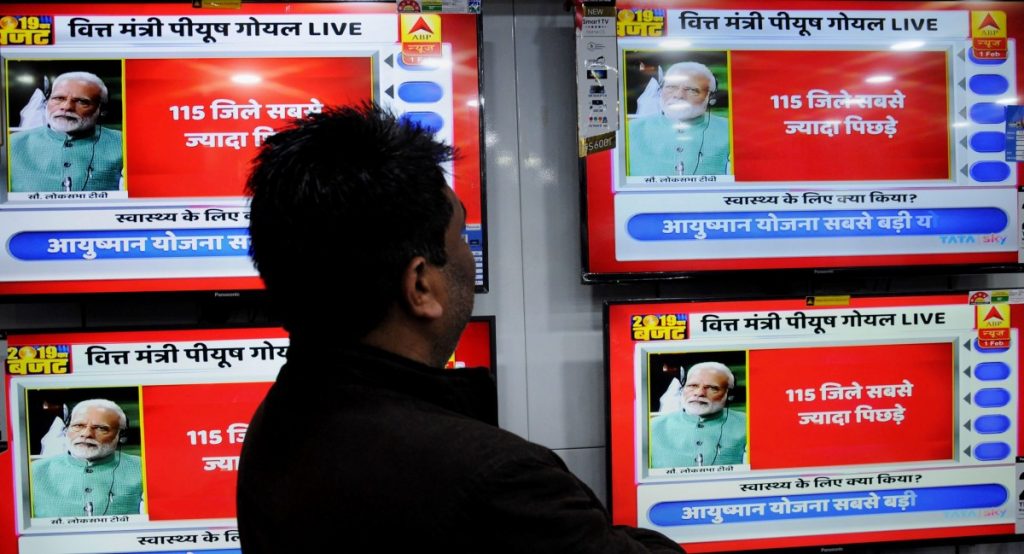 A man watched the Budget presentation outside a shop in Amritsar. Credit: PTI

But in an election year budget that is the least of concerns since the idea is to get votes by giving something to all important sections of society. Is it is too late for these schemes to get votes for the ruling dispensation? Many will ask why is all this being done now, just before the elections? They will also ask, whether any of this can be implemented before the elections?

Middle class tax concessions will come into play next year. Distribution of money to the farmers will take a lot of preparation – it cannot be done immediately. Pension to the unorganised sector workers will be available on retirement. Above all, there is a trust deficit since the implementation of the schemes announced earlier has often been tardy or flawed due to lack of preparation and a lack of a road map for implementation.

The ruling party’s credibility is dented due to its the playing around with data – whether it be employment, GDP or farmers’ suicide. So, will the budgetary statistics based on the faulty numbers being put out by the government (and obviously used by them) give credible budget numbers? For instance, the current rate of growth of the economy is less than 1% and not 7% since the government data does not account for the unorganised sector’s decline.

Thus, the distress is much greater than what the government believes and much more support is needed by the unorganised sector workers. There is also a miscalculation of the projected collection of taxes. All this will impact the actual fiscal deficit which could be more than 4.1% of GDP if all the schemes are implemented with the current taxation proposals.

The government has given the excuse that it does not have data on employment nor does anyone else. By the same token no one has data on GDP and its growth because similar methods are used to calculate the GDP numbers. Then how is the budget formulated? Is it wishful thinking?