Even the vaguely “pink” effort in the Economic Survey is whitewashed in the finance minister’s Budget speech that is heavily based on stereotypical gender roles for women, and even that completely disappears when we get to the actual budget allocations. Has the Union Ministry of Finance really turned gender-sensitive at last? At least according to its own lights, it has. Indeed, the creators of the Economic Survey are so excited by this new perspective that they have been moved to colour the cover of their document pink. (Presumably, no one has yet told them about how such colour stereotyping is no longer fashionable.) And – instead of the usual practice of clubbing together matters relating to women with children, social sectors and other supposedly “soft” stuff – there is an entire chapter in volume I of the Survey devoted to gender and specifically the issue of son preference and its implications.

However, this chapter focuses on an area that is politically “safe”: the issue of son preference, which can then be traced back for millennia and blamed on patriarchal traditions and social customs without emphasising the role of current state policies and the economic processes they generate. And it does little to link such son preference with the issues that are on top of the concerns that most women in India have today: the lack of economic empowerment, expressed most sharply in skewed gender distribution of assets, falling paid work participation and increase in unpaid work; and violence against women in both public and private spaces.

Further, while some attention to gender issues is certainly to be welcomed, it’s worth noting that the second volume of the Economic Survey continues in its hoary tradition of rendering women almost invisible other than some references in the usual chapter on Social Infrastructure, Employment and Human Development. So, aside from this brief foray in volume I into one particular gender concern (the falling sex ratio), not much seems to have changed overall.

This is confirmed by the Union Budget, which continues to be as gender-blind as ever. Even the vaguely “pink” effort in the Economic Survey is whitewashed in the finance minister’s Budget speech, which contains measures that are heavily based on stereotypical gender roles for women, and even the faded pink completely disappears when we get to the actual budget allocations.

The main measures directed to women seem to be the following: an increase in coverage of the Ujjwala scheme to provide free cooking gas connections to poor women; some expansion of the MUDRA loan scheme in which three quarters of loan recipients have been women so far; and a reduction in the required contribution of women workers who are enrolled in the Employees’ Provident Fund Scheme, from 12% to 8%. The Ujjwala scheme is being touted as a complete success despite evidence that many poor women have not been able to continue with gas cylinders that have to be paid for after the first installation. The MUDRA loans provide only around Rs 40,000 on average – hardly enough to start a productive enterprise, so it’s not surprising that mainly women (with lower expectations anyway) have been the major takers.

In any case, the increased allocations for these are relatively small, which means that even the government does not really expect big expansion in these items. And, meanwhile, consider the areas that really do matter for women, for which the budget allocations are so low as to be downright shocking. The National Health Mission relies on the hugely underpaid labour of ASHAs who are not treated as workers by their employers (the government) and get only a fraction of the legal minimum wage. The allocation for this has been cut by Rs 672 crore relative to the current year’s spending! This suggests not only that the government is not intending to expand this public health programme, but also that it plans on continuing with the abysmally low remuneration paid to ASHAs on whom the entire system rests, with no increase even to cover rising consumer prices. 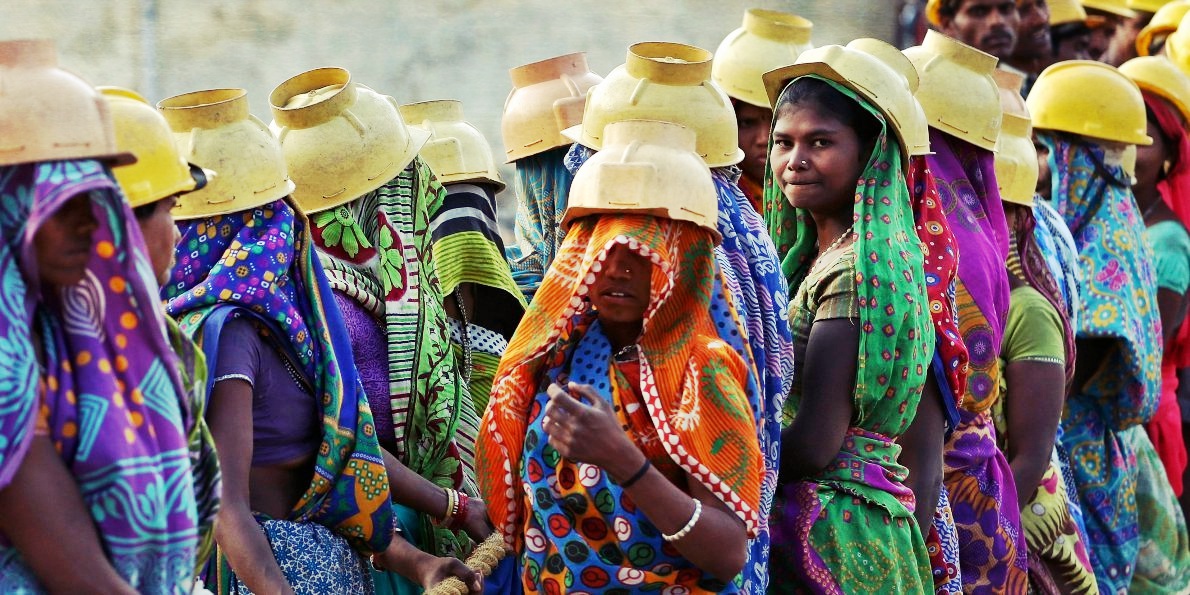 When the government itself runs major health and nutrition programmes on the backs of women whom it does not even recognise as workers, it can hardly become a champion for the rights of women workers in other private activities. Credit: Reuters

The Integrated Child Development Services (ICDS) is another massively underfunded scheme that also relies on the underpaid work of anganwadi workers and helpers – and here too the Budget allocation from the previous year has increased by only around Rs 1,000 crore, an increase of 7% that will barely keep pace with inflation. Once again, clearly, no expansion or increase in remuneration to workers is apparently being considered.

If the government were serious about empowering women and recognising their work to ensure that it is properly remunerated, it would begin by putting its own house in order. When the government itself runs major health and nutrition programmes on the backs of women whom it does not even recognise as workers, who receive well below minimum wages and whose conditions of work are both insecure and informal, it can hardly become a champion for the rights of women workers in other private activities.

Also read: For the Social Sector, Budget 2018 a Cause for Caution Rather Than Celebration

Health concerns of women are given a further bashing by the overall thrust of the Budget in moving away from public health delivery towards a promised insurance-based regime that would rely on private suppliers. Let us leave aside for the moment the obvious fact that the grandiose offer of Rs 5 lakh health insurance cover to 100 million families has not been backed by any budgetary outlay. The orientation itself is a concern, since it moves away from emphasising good quality public delivery to private based systems in which the main beneficiaries would be insurance companies, not patients. This is more than the reneging of responsibility by the government. It also has strong gender implications, since women tend to rely heavily on public institutions when these are adequately funded and of reasonable quality, and their absence can often mean the denial of medical care altogether.

Meanwhile, the safety of women and girls has emerged as a critical concern across the country – yet since the December 16 gang rape case caused massive public protests five years ago, matters seem to have deteriorated further. The Mission for the Protection and Empowerment of Women (which includes the Nirbhaya Fund, for what it is worth) gets a paltry allocation of Rs 1,365 crore. This trivial amount would do nothing to put in place the several measures that were outlined by the Verma Commission as essential for women’s safety, and suggests that the government is really not serious about this at all.

There are many other areas in which this Budget shows the usual gender insensitivity, including in the regressive distributional impact of the tax measures, that are disproportionately likely to affect poor women. But the basic point is that the self-congratulatory note struck by several finance ministry representatives that they are recognising the concerns of women, is not only unwarranted – it may even rebound on them.