In Blow to Poor, Government Cuts Compensation For Delay in Payment of NREGA Wages 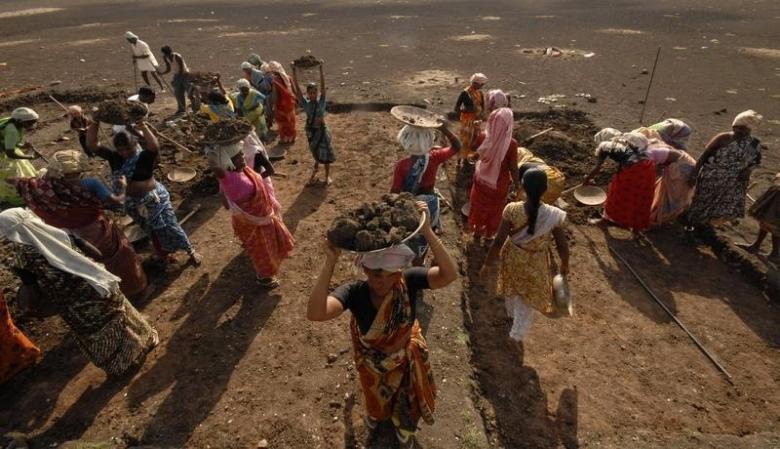 Labourers work on a dried lake to try and revive it under the National Rural Employment Guarantee Act (NREGA) at Ibrahimpatnam, on the outskirts of Hyderabad, June 17, 2009. Credit: Krishnendu Halder/Reuters/Files

New Delhi: The Union government has been understating the compensation that workers should get under the Mahatma Gandhi National Rural Employment Guarantee Act (MGNREGA) for any delay in payment of wages. Not just that, only a portion of this understated compensation is being paid to the beneficiaries across the country.

According to the job guarantee scheme, wages should be paid to workers within 15 days of generation of the muster roll.

If that is not done, then the workers need to be paid compensation for each day of delay till the wages are deposited into their accounts.

However, the government has in place regulations that systematically calculate less than the payable compensation. These rules require the government to calculate the compensation only till the date a demand is raised at the district level by officials for payment of wages (called a fund transfer order, or FTO ), and not till the actual payment of wages to the worker.

An FTO is generated at the state level as a demand to the Centre for transferring the wages. The actual transfer of funds happens much later — normally within a week after the FTO generation — from the Union rural development ministry to the worker’s account, electronically.

Government records show that Rs 441 crore worth of compensation (calculated using the method that understates the amount) was due to workers for delayed wages in financial year 2016-17. Out of this, the government approved compensation of only Rs 17.15 crore and has paid Rs 10.70 crore so far.

For April 2017, compensation worth Rs 6.31 lakh stood payable on May 1, against delayed wages of Rs 52.80 crore. But the state-level authorities, empowered by the rules of the Centre, have so far paid only Rs 1,734 across the country. “We are working to correct it. We should be able to fix this in future,” a senior officer in the ministry of rural development said, responding to questions.

“Currently, 44 per cent of MNREGA transactions are happening on time. We are trying to improve it further by integrating the MIS system with the help of Public Financial Management System (PFMS) and National Informatics Centre. The part-1 (the time taken in generating muster roll and pushing the FTO to Centre) and part 2 (the time taken by the Centre to process the FTO and directly transfer the amount to the beneficiary’s account) would both be considered (for calculation of compensation),” the officer said. 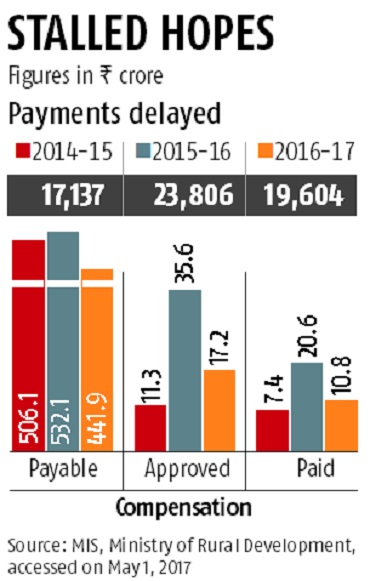 The officer, however, noted that delay was largely occurring at the state level and not in payment from the Centre, adding the government was working hard to get states to pay wages on time.

The issue of compensation is important because a large percentage of wages is not paid within the stipulated time. In 2016-17, Rs 19,455 crore worth of wages were paid after the stipulated 15 days. This is 55.86% of the total wages paid in the last financial year, according to a government affidavit presented to the Supreme Court. Business Standard reviewed the affidavit. Of these delayed wages, Rs 3,836 crore was paid after more than three months and Rs 2,578 crore after two months.

The Supreme Court in its recent orders asked the government to inform it about the status of both the compensation paid for delayed wages and the interest paid on delayed wages.

Rural development ministry regulations provide room for the states to reject even the understated compensation. In its annual master circular, it said last year that compensation could be denied to workers for three reasons –natural calamity, lack of funds, and compensation not due. However, neither the rural employment guarantee law nor its schedules have provisions for denying compensation.

The circular was revised this financial year to remove the “lack of funds” as an excuse to deny compensation, but in the computerised system states continue to use that as a reason to deny compensation. The other two reasons can still be exercised by states to deny the compensation payable.

Speaking to Business Standard, the ministry officials admitted that giving reasons such as “lack of funds” to deny compensation was not correct. But, last year itself, Rs 257 crore was denied to wage workers solely on this ground.

The problems of systematically understating compensation and then using various means to underpay even against these calculations have been pointed out earlier in the Central Employment Gaurantee Council of MNREGA – the statutory apex body under the law to monitor the implementation of the scheme.

The minutes of the November 2016 meeting of the council show that a member pointed out that the ministry’s regulations and methods of calculating compensation were a “violation of the act”.

The biggest challenge, officials admit off the record, in paying proper compensation to the workers is the fact that state governments are required to recover the compensation amount from functionaries responsible for the delay in paying wages in the first place.

The ministry keeps no record of how much has been collected from the officials and if any amount was recovered from central government officials for delay in paying the wages even after the FTO was generated.