How India Can Reduce the Size of Its Black Economy

If the government is serious about addressing the black economy, fundamental changes in the structure and organisation of the economy and politics are required. 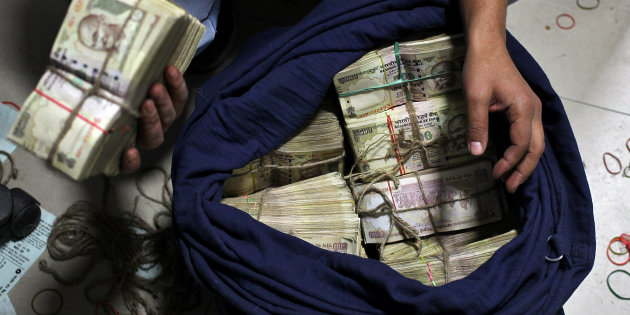 The political cost of the measures needed to do away with the black economy is high. Credit: Mukesh Gupta/Reuters

November 8, 2016 will be a memorable day for Indians in years to come. On this day, Prime Minister Narendra Modi eliminated more than 85% of Indian currency notes in circulation, wreaking havoc in common people’s lives. While the effects of this policy may take some time to unfold, will they include reduction in the size of black economy and corruption? To explore the answer to this question, it might be a good idea to look at what are the determinants of black economy and corruption.

Regulations and the Indian black economy

India has a substantial informal economy, or transactions and businesses that are not registered and cannot be taxed. This informal economy employs almost 75% of the total workforce in India but only contributes 20% to GDP. It is substantially less productive than the formal economy, though it provides a livelihood to a majority of Indians. Not all the transactions in this economy are illegal and most economic activities are undertaken by people and firms that belong to the unorganised sector. Acknowledging the meaningful differences between the terms ‘black economy’, ‘informal economy’ and ‘unorganised sector’, one common theme underlying these various categories is either blatant tax evasion (in the case of the black economy) or the government’s imperfect and sometimes-harmful ability to tax transactions.

Almost all countries have some degree of black economy, prompting a significant amount of research on its causes and determinants. According to a survey of such literature by Friedrich Schneider and Dominik H. Enste (2000) and Friedrich Schneider (2016), the most important and often cited causes are:

Clearly, most of the above reasons seem to be relevant for India, with varying degrees of intensity, giving rise to both a black economy and poor rates of tax penetration. Therefore, even if demonetisation is successful in reducing the existing stock of black money, a different set of policies would be required to reduce its growth and size in the future.  Research gives us some hints about what such policies could be. For example, studying the old and new EU member states, Kamila Fialova and Ondrej Scneider (2014)  indicate that one institution that unambiguously increases the shadow economy is the strictness of employment protection legislation. Timothy Besley (2004) gives us similar insights for India. The study shows that states in India that implemented pro-worker laws experienced lowered output, employment, investment and productivity in registered or formal manufacturing and an increased output in unregistered or informal manufacturing. Pro-worker laws were also associated with an increase in urban poverty. So in order to reduce black economy, one of the things that the government could do is reform the labour laws that currently make hiring labour through formal channels costly. That may not sound positive or pro-labour, but will ultimately turn out to be exactly that by increasing employment in the formal sector. That will be a tough decision with significant political costs, which makes it a less attractive option for any political party in power. In addition, we need a social safety net in place to support such reforms.

Other regulations that introduce opaqueness in implementation and compliance can also increase the size of black economy or the ability of the informal economy to pay taxes. The policy of a goods and services tax is a right step in this regard. Similarly streamlining other direct and indirect tax laws and regulations would considerably alter the incentives to under report or misreport incomes and evade taxes. India has consistently fared worse on the ‘ease of doing business‘ index. One of the main reasons for this is the lack of transparency in rules and regulations governing business transactions. Reforms in these laws would certainly reduce the growth of the informal or black economy.

One of the peculiarities of the Indian informal manufacturing sector growth after 1989 is that it is significantly present in urban India and is constituted mostly by one-person establishments focused on tradable sectors (Syed Ejaz Ghani, William Robert Kerr and Alex Segura, 2015). These authors establish this relationship of growth in informal manufacturing and urbanisation, but there needs to be further investigation of the underlying mechanisms. There is some evidence of subcontracting from larger enterprises suggesting benefits in staying close to the outsourcing firm (agglomeration economies). These could come from infrastructure being more dependable in urban areas than in rural ones suggesting some role for infrastructure related policies and regulations. Also, subcontracting to the informal sector could be thought of as a way of avoiding hiring labour formally. This brings us back to the cost of hiring formal versus informal labour.

Ghani and Kerr (2013) suggest that the rise of post-reform informal manufacturing goes hand in hand with rising female labour force participation rate. Many of these one-person establishments have been started by women. These authors document that such one-person establishments are mainly household businesses started by women. Given this, the growth of the informal sector suggests increasing economic participation of women and could be thought of as a healthy trend. To promote such participation in the interest of reducing gender disparities in economic outcomes would mean finding other ways of tracking such economic activity and bringing it under taxation without distorting the incentives.

In short, the set of policies that could influence the size and growth of black economy as well as corruption have to do with transparency of policies governing different economic transactions in the economy and their sensitivity to socio-economic problems in India. Unfortunately, demonetisation does not seem to be one of them.

Institutional factors and the black economy

A preliminary look at the data tells us that tax evasion, corruption and the black economy are problems more acutely present in developing countries than in developed countries. This suggests there is something more fundamental than the availability of high-denomination currency notes that is causing this. Talking about why developing countries tax less, Timothy Besley and Torsten Persson (2014) give us some idea about what these deep or fundamental factors could be. In addition to the economic structure of developing economies, political factors such as weak institutions, fragmented polities and the lack of transparency due to weak news media also play an important role. These factors are closely related to the importance of institutions argued very convincingly in Daron Acemoglu and James Robinson’s Why Nations Fail.

Economic institutions are the set of rules that govern our economic transactions and outcomes. Most developing or poor countries are poor because they have “extractive institutions” that allow access to resources and economic opportunities to only a few, often at the cost of the majority. They transfer resources from the people to the ruling elite by limiting or failing to expand economic opportunities and capabilities for the common people. Inclusive institutions, on the other hand, promote the rule of law, protect private property rights and build capabilities of the masses through subsidised public education.

There is substantial evidence that European colonialists created extractive institutions in colonies that were resource rich but densely populated around the 1500s. They created inclusive institutions in countries that were sparsely populated and not so resource rich around that time, allowing them to settle and extract resources from the richer colonies. If we look at the world today, countries that are poor were the colonies where the Europeans established extractive institutions (see Acemoglu et al, 2001). India happens to be one such former colony along with Mexico, Peru and many of the African countries.  In addition to this colonial impact, the unequal social structures like the caste system that have historically existed have worsened the matters further.

Extractive institutions limit the capacity of common people to better their lives. A weak public education system is one such institution. For example, few Indians today have access to quality school education, resulting in an average of 5-6 years of schooling for the whole population. That is substantially lower than nince years of average schooling in China or 13 years in most of the developed world. Such low average levels of education limit participation in the modern economy to the sections of society that traditionally have had access to education or those who can afford the cost of private education. So corruption could be understood as a way to redistribute resources between the haves and have nots, in response to increasing inequality and the inability of a majority of citizens to participate in the modern economy. The calls for reservations in state jobs by different sections in the Indian society can also be understood as an attempt to gain a greater share of the proverbial economic pie that otherwise seems unavailable because of the lack of capabilities.

Another example of an extractive institution is weak political institutions. When politicians cannot be held accountable for failure to deliver on public goods, people have to amass means to pay for it themselves. This creates incentives to evade taxes. The second effect of weak political institutions is that needs of the most disadvantaged do not have voice through voting. For example, there is a dire need to improve quantity and quality of primary and secondary schooling all across India. However, this need rarely gets reflected in the percentage spending on education that is biased towards higher education. Peter H. Lindert (2003) calls it the elite bias in policy making. It exists because the people who care about higher education have more influence on policy than people who do not have access to basic education. This elite bias can diminish only if political institutions are strengthened to reflect the needs of masses and not just the elites.

In short, to reduce India’s black economy (and reduce the size of the informal economy) over time would require fundamental changes in the structure and organisation of economy and politics. We need to replace the extractive institutions with ones that broaden access to resources and opportunities, and help build the capabilities of the masses. This is easier said than done and may entail significant political costs in the short term, reducing its attractiveness as a political platform. The urban elites, where most of the votes, taxes and policy influences come from, have reaped the benefits of globalisation. In order to make these benefits accessible to the masses would require significant shift in resource allocation and government spending towards better schools, electricity, roads and law and order. How do we ensure that as a society we make this trade-off between short-term benefits for a few versus long-term benefits for everyone? That should be the question we all seriously deliberate on.

Parag Waknis is an assistant professor at the University of Massachusetts Dartmouth.