Barclays Sees No Growth For India in 2020, Pegs Economic Cost of Lockdown at $234 billion 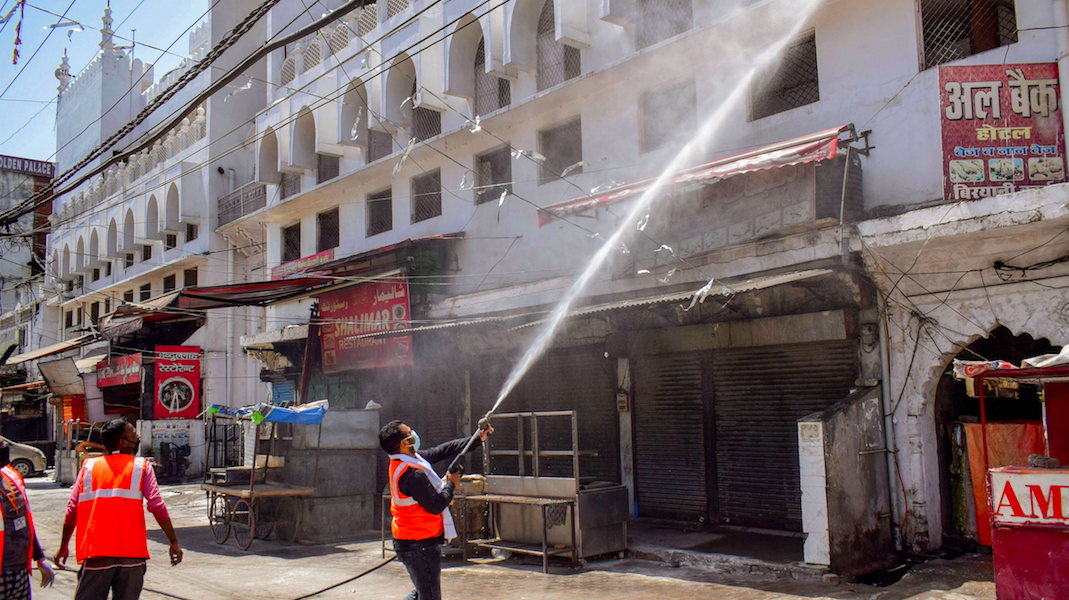 Municipal Corporation workers spray disinfectant at a COVID-19 hotspot area during a nationwide lockdown in the wake of coronavirus pandemic, in Prayagraj, Monday, April 13, 2020. Photo: PTI

New Delhi: Barclays has pegged the economic cost of the lockdown, which has now been extended till May 3 with caveats, at $234.4 billion (8.1% of gross domestic product, or GDP), assuming that India will remain under partial lockdown at least till May-end.

While India’s coronavirus (Covid-19) pandemic outbreak has not officially reached the community transmission stage, analysts at Barclay’s believe the existing restrictions on movement are causing much more economic damage than anticipated.

“The negative impact of the shutdown measures on the mining, agriculture, manufacturing and utility sectors appears higher than we had expected. Combined with the disruption in several service sectors, we now estimate that the economic loss will be close to $234.4 billion (8.1 per cent of GDP), assuming that India will remain under a partial lockdown at least until the end of May. This is much higher than the $120 billion we had estimated earlier for roughly the same time period previously,” wrote Rahul Bajoria, chief India economist at Barclays, in a recent co-authored report with Shreya Sodhani.

The nationwide lockdown to prevent the spread of the Covid-19 pandemic would remain in force till May 3, Prime Minister Narendra Modi said on Tuesday. 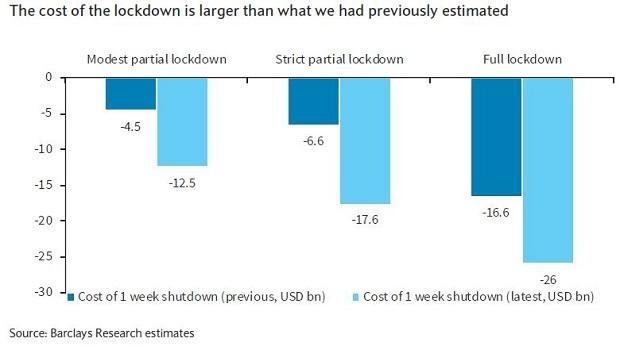 Earlier, after the announcement of the lockdown three weeks ago, Barclays had cut the GDP growth forecast for CY20 to 2.5 per cent from 4.5 per cent, based on an analysis of state-level GDP, share of activity and a varied level of disruption across India.

For their analysis, Barclays has assumed that the lockdown will end by early June, followed by a modest rebound in activity, reflecting inventory rebuilding across certain sectors. “However, if we are still seeing localised Covid-19 outbreaks, which lead to frequent shutdowns, the scope for the economy to recover will continue to decline,” they caution.

That said, most analysts expect the Government and the Reserve Bank of India (RBI) to continue to provide stimulus to help stem the economic rout triggered by the Covid-19 pandemic. While the government, on its part, has unveiled a host of measures for the poor over the past few weeks, the RBI has undertaken liquidity support measures and cut the key interest rates sharply.

“Future policy response will be dependent on the extent, severity and duration of the disruptions related to Covid-19. If disruptions linger for longer as in our bear case, we expect the RBI to lower rates by another 40 basis points (bps) to 4 per cent and continue with liquidity support and macro prudential measures,” says Chetan Ahya, chief economist and global head of economics at Morgan Stanley.