"The Indian economy is being held back by a large squeeze in credit availability emanating from non-bank financial companies." 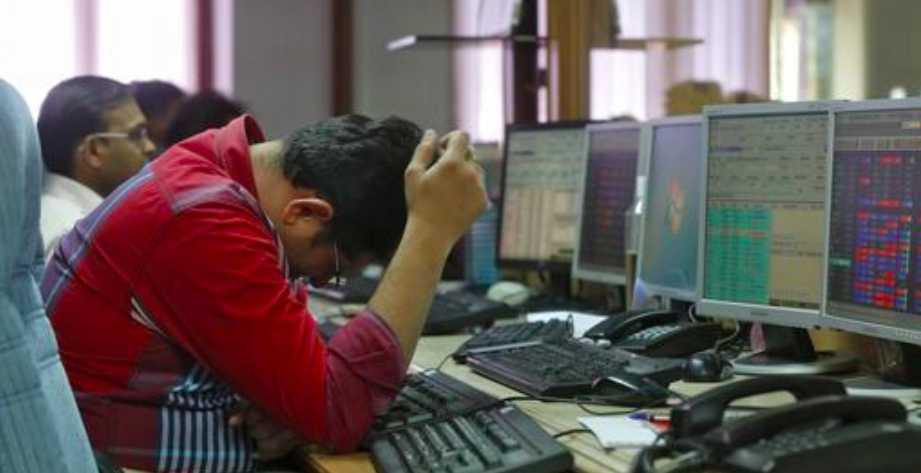 Representative image of a broker reacting while trading at his computer terminal at a stock brokerage firm in Mumbai. Photo: Reuters

Fitch, which had in June 2019 put India’s GDP growth at 6.6% for the fiscal year that began in April 2019, said the recent government measures to boost economy including a cut in corporate tax rates will gradually nudge growth.

The projection is lower than 6.1% that the Reserve Bank of India (RBI) had forecast in early October. It is also the lowest that any major financial institution has given India so far.

The Indian economy decelerated for the fifth consecutive quarter in April-June, with GDP expanding by a meagre 5%, down from 8% recorded a year earlier. This is the lowest growth outturn since 2013.

“Weakness has been fairly broad-based, with both domestic spending and external demand losing momentum,” Fitch said. “The Indian economy is being held back by a large squeeze in credit availability emanating from non-bank financial companies (NBFCs).”

Earlier this month, Moody’s Investors Service slashed its 2019-20 GDP growth forecast for India to 5.8% from 6.2% earlier, saying the economy was experiencing a pronounced slowdown which is partly related to long-lasting factors.

Moody’s had attributed the deceleration to an investment-led slowdown that has broadened into consumption, driven by financial stress among rural households and weak job creation and said the growth will pick up to 6.6% in 2020-21 and to around 7% over the medium term.

Last month, the Asian Development Bank and the Organisation of Economic Cooperation and Development lowered 2019-20 growth forecast for India by 50 basis points and 1.3 percentage points to 6.5% and 5.9%, respectively.

Rating agency Standard & Poor’s has also lowered its India growth forecast to 6.3% from 7.1%.

Fitch in a note on Indian economy said that assuming the sluggish pace of lending is maintained throughout the year, total new lending will amount to only 6.6% of GDP in the fiscal year 2019-2020, down from 9.5% in the previous fiscal year.

While an array of factors have contributed to the Indian slowdown – including a downturn in world trade – Fitch believes that the severe credit squeeze has taken a heavy toll.

“NBFCs have faced a severe tightening of funding conditions over the past year and a half. They have in turn sharply reduced the supply of credit to the commercial sector. The auto and real estate sectors have been particularly hit by NBFC credit rationing,” it said.

Data from the RBI show that the flow of new lending from non-bank sources was down 60% year-on-year between April and September.

In contrast, banks’ lending has held up well in recent months, mitigating some of the overall credit supply shortfall. However, bank lending could not prevent a sizeable credit crunch in the first half of 2019.

Fitch said the success of the inflation-targeting framework adopted by the RBI in 2016 in reducing inflation has been associated with sharply rising real lending interest rates since mid-2018.

“While the RBI has been able to lower interest rates, policy rate cuts have not been fully passed through to new rupee loans. As a result, inflation-adjusted (real) borrowing costs have increased, weighing on credit demand,” it said.

The lack of monetary policy transmission derives from the combination of high public-sponsored deposit rates against a backdrop of stretched banks’ balance sheets.

Fitch said the government has taken a string of policy measures over the past couple of months to shore up the economy and revive credit.

The measures include attempts to ease NBFCs’ liquidity positions by encouraging banks to purchase high-quality NBFC assets through credit guarantees and additional liquidity. Also, further capital is being injected into banks and corporate tax cut to their lowest level.

“These measures should gradually improve the flows of credit and nudge up growth. Looser global financial conditions are also supportive, with a noticeable pickup in external commercial borrowings in 2019. We expect economic growth to be 5.5% in 2019-2020, before picking up to 6.2% in 2020-2021 and 6.7% in 2021-2022. Nevertheless, growth is likely to significantly below its potential over the next year or so,” it said.