Ashok Mitra: Railing Against the Times, But Very Much a Part of Them

Revisiting a review written for 'Frontline' magazine of the English version of Ashok Mitra's Bengali memoirs, 'Apila Chapila', published in 2007. Mitra passed away in Kolkata on Tuesday. 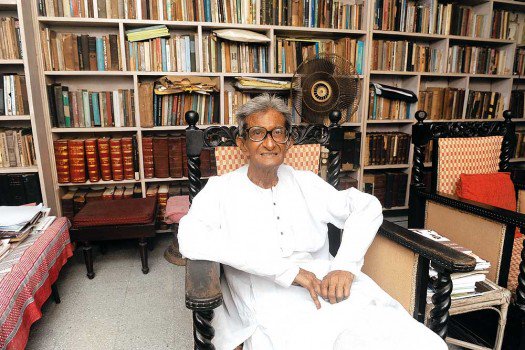 It is difficult to write about those whom you love. Curiously enough, the difficulty is not only because of the fear of excessive partiality: it is also because love brings with it the freedom to be exasperated. And intimacy creates very complex and textured perceptions, often too nuanced to be easily captured in mere words.

That is why, when this book of memoirs (A Prattler’s Tale: Bengal, Marxism, Governance, Samya, Kolkata 2007) by Ashok Mitra, came into my hands, I was at first reluctant to write about it. But the author was and is so much more than the recipient of my private affection: he is one of the more remarkable personalities of independent India, who has been involved and even deeply enmeshed in some of the most significant events and socio-economic processes of the past six decades and more, and whose acquaintance spans a fascinating cross-section of our societal mosaic.

Ashok Mitra may be in the public eye as one of the more eminent Left economists of India, who has written several valuable books in the subject, served in important positions in the central government and been finance minister of West Bengal as well as a member of the Rajya Sabha. But many others will know of him through his prolific columns on current affairs in several journals (notably the Economic and Political Weekly) and newspapers, in a journalistic parallel career that has spanned more than half a century and showed his passionate commitment to progressive causes. And still others will have engaged with his more approachable literary pieces, in both English and Bengali, and discovered at least in part a kindred spirit.

Contradictions are inherent in all of us. Even so, the life and personality of Ashok Mitra has over the years distilled the very essence of the term: at once vociferously public and intensely private; devastatingly cynical and endearingly romantic; angry and affectionate; stubborn and sensitive; puritanical yet generous to a fault; belligerent with his friends but also fiercely loyal to them; strongly political while remaining at heart a sentimentalist lover of poetry; worshipping idealistic principles but enjoying above all a good gossip; railing against the times, but very much a part of them.

All these attributes, combined with his indisputable literary flair and prodigious memory, are what make this book so absorbing and so much fun to read. The Bengali original of this book, Apila Chapila (Ananda Publishers, Kolkata, 2004) generated much enthusiasm and also much controversy when it was first published, in a way that has been typical of the author’s life. The English version captures most of the flavour of the original, even if it is sometimes more circumspect.

It is an utterly charming book as well. From the start, a dizzying array of personalities fill the pages. There are countless anecdotes, some humorous and some poignant, and all quite fascinating. There are quirky and effective pen portraits of the abundant profusion of his friends, acquaintances, colleagues. 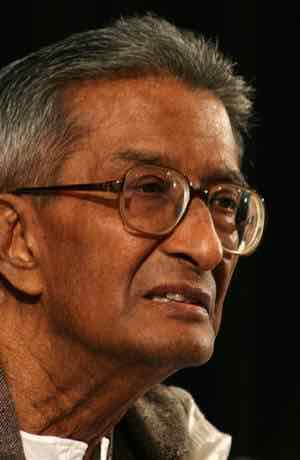 Of course, there are times when the cast seems perhaps too lengthy, and the kaleidoscope of characters too intricate for the reader to retain. Many of the people flitting across the pages are not only well known in different ways but also part of the elite of India, in different spheres ranging from the literary and artistic to the academic and scholarly to the political and ruling groups.

Yet there are also some notable silences. For example, there is scarcely any mention of his wife Gouri – even though her graceful dignity, quiet efficiency and unswerving loyalty must have made her presence the central stabilising factor of his life. Like the quintessential Bengali gentleman that he has often declared he detests, Ashok Mitra steers clear of the truly intimate, perhaps assuming that those who are deeply close are not to be trafficked in words.

The opening chapters are wonderfully evocative of childhood and youth in Dhaka in the 1930s and early 1940s, and the sheer exhilaration of student life in Kolkata in the period just before Independence is also effectively captured, along with whiffs of the momentous times in which these were experienced. Indeed, the entire book is suffused with the vibrancy and excitement of particular moments. And since Ashok Mitra was so closely involved with so many events of national significance, these memoirs also offer a panoramic glimpse into some of these broader processes and events.

The heady days of central planning with Mahalanobis in Delhi; the creation of the Economic and Political Weekly; the social and political atmosphere of Indira Gandhi’s “Left-leaning” phase in the early 1970s; the bloody emergence of Bangladesh as a independent nation; the violent attempt at destroying the Left in West Bengal over the same period; the grim days of the Emergency; the extraordinary political transformation as the Congress lost the national elections and paved the way for the era of coalition politics; the electoral victory of the Left Front in West Bengal in the late 1970s; the battle over Centre-State fiscal relations; the rising hegemony of neo-liberal economic policy from the early 1990s – all these form more than just a backdrop, as they are inextricably intertwined with the dramatis personae of this account.

Some of Mitra’s ruminations about the difficulties of progressive change in only one state within a federal system and the internal systemic threats emerging even within disciplined Marxist parties that are pushed by varying forces when in power, deserve more attention. Even where one disagrees, there is no contesting that he raises critical and thought-provoking questions, and that his reflections are informed by continuing commitment.

It is true that the final sections of the book do carry perhaps too much of the perception that everything – even progressive politics and literature – was better in the past. In this sense some of Mitra’s later reflections do indeed fit in with the stereotypical attitudes of those who have been around for longer, who tend to assume that the newer trends and changes are generally adverse. Nostalgia can certainly colour one’s attitudes to the present, but it should not lead to privileging a past which was probably as complicated and contradictory as the present.

The disarming thing is that the author would probably be the first to admit this, as he would be to agree with anyone who brands him as difficult. Yet the impression on reading this book is not one of a difficult man, rather of an incurable romantic. It is a book full of people, full of little stories about them and full of the emotion that only caring deeply about people can bring. So this idiosyncratic memoir is in some ways a love poem to many of the people he has ever known. This may then be the longest and most successful poem of the would-be poet.

This article was originally published by Frontline in 2007.