Ashok Mitra, a Man Who Was Equally Committed Politically and Personally

For those who were victimised or isolated for dissident views, of whatever description, there was a special place in Ashok Mitra's heart. 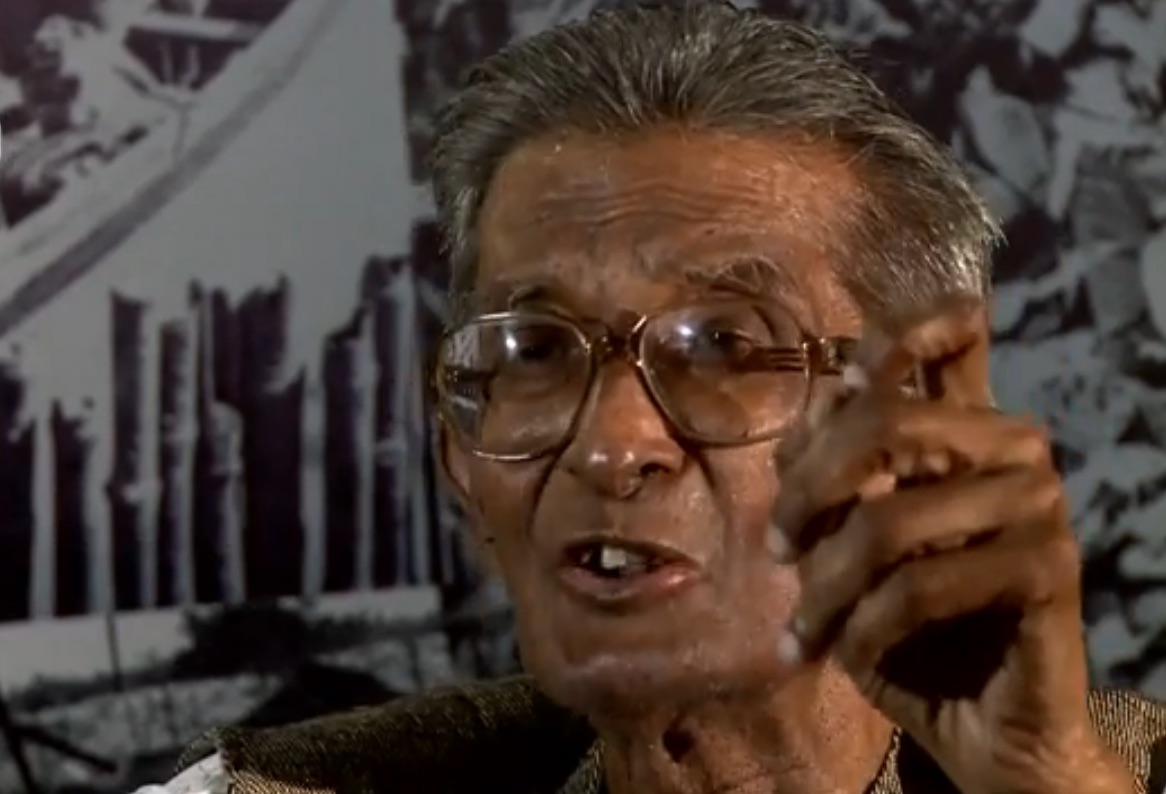 The Bengali version of this article is being published in Arek Rakam, a journal that Ashok Mitra helped set up as its first editor.

It is a privilege to be able to write about Ashok Mitra in the journal that was probably the last love of his life. In a way, the very existence of Arek Rakam describes much about the man himself and his extraordinary capacities. Think of someone already into his ninth decade, having the enthusiasm and energy to embark on such a new and challenging venture – the creation of a completely new journal designed to do no less than revive the intellectual life of Bengal (something that was always so close to his heart).

Imagine a person whose eyesight was already failing, who could barely read the print that was sent to him and had to have sections read out to him, being the most committed, diligent and even oppressive of editors, persuading and badgering authors to submit contributions, painstakingly poring over copy, chafing over the tiniest mistakes, worrying about maintaining consistent quality in every issue, insisting on editorial meetings to thrash out policy. If for no other reason, this journal must continue and go on from strength to strength as a tribute to him.

Much has been and will be written about this extraordinary man: about his immense contributions as a public intellectual; about his important forays into policy making and into politics; about his role in so many important events and processes of independent India and in West Bengal; about his wonderfully idiosyncratic and stylish literary flair expressed in both English and Bengali; about his passionate lifelong commitment to progressive causes that was combined with a deep honesty that made him unafraid of speaking truth to power, even to his own comrades in the struggle and to his friends. All these qualities, rare as they are, are even rarer in combination. But in this piece, I will present a more personal picture, from someone who saw him as a father figure and was privileged to know him well.

After my own father, Ashokkaka, as we called him, was probably the most important man to have shaped my approach to life and intellectual development. My sister Aditi and I grew up in the warm glow of the unalloyed love and concern that emanated from him and his wife Gouri (whom we called Ashokkakima). They were in a way our proto-parents – and as we grew up, we took it for granted (in the way that children do) that these particular adults would always be there for us, just like our own parents: protecting, remonstrating, chiding, appreciating and sharing our lives and activities.

In fact, his ability to relate to young people and children remained remarkable all through his long and varied life. He was genuinely interested and curious about what they thought, what they did and how they did it. Several generations of women, in particular, can speak of how, having got close to him as children, they each had a special and individual relationship with him over years. Even to the end, he continued to correspond with several teenagers and young people. He understood them, related to them and was proud of their achievements.

A few months before he died, he told me how much he appreciated letters from Nayantara, the daughter of Nitya Ghotge (who had also corresponded with him in the past and was herself the daughter of his friends, the Sambamurtis). He spoke with pride of the maturing of my niece Megnaa as she spent more than a year doing fieldwork in a Sunderbans village. He keenly followed anything written by my daughter Jahnavi and in his final year insisted that she come to Kolkata specially to visit him so that he could get to know her better now that she had become a young adult (which I am happy to say she did). He wanted to know and then could recount the various antics of the young son of my niece Anannya and the daughter of my niece Araddhya. He delighted in the nickname “Ghanshyam” bestowed on him by my niece Kajori. And this was just the latest generation of young people who felt they had a special deal with him, following in the footsteps of their parents, aunts and uncles and even grandparents.

He also related to other young people, especially those in the broader Left movement. Typically, he was more attracted to the rebels, the questioners, the idealists. But he held them to high standards. When some of them then became more apparatchik in style and persona, he was disappointed even as he retained his affection for them. And for others who were victimised or isolated for dissident views, of whatever description, there was a special place in his heart as long as he believed that they had a basic integrity. In his own behaviour, there was no sense of hierarchy based on age or experience in these interactions.

He was a tremendously social person. He seemed to know everyone, in so many different walks of life – and his prodigious memory could serve up details and anecdotes about them that they might have forgotten themselves. As a teenager, I remember accompanying him on several of his whirlwind social rounds that covered a range of artists, economists, journalists and bureaucrats spread across the city of Delhi. He would walk in unannounced, refuse all refreshments that the startled hosts sought to provide, ask some general and some more penetrating questions about their state of being and their recent activities, assess their current moods and opinions, then stand up abruptly and be off. On one memorable occasion, we covered more than a dozen households in around half a day, after which he remarked in a satisfied manner that he now had information on these set of friends to last for a few months at least.

He loved adda, and was really good at it. Over the years, in different locations but especially in the famous flat in Sonali Apartments, Alipore Park Road, he and Ashokkakima thoroughly enjoyed providing generous hospitality (with the most delicious food prepared to her very exacting standards) and a convivial atmosphere for all sorts of discussions, arguments and conversations. The Sunday morning salons at their home, in their heyday, were enjoyable and sometimes exhilarating sessions at which poets and politicians, bureaucrats and students, artists and academics, activists and itinerant visitors, all congregated.

Part of the reason those addas were fun is that Ashokkaka loves to tell stories. He was an accomplished raconteur, remembering the appropriate anecdote at the right time, to add a bit of masala to the discussion. A few months before his death, I remember an occasion when several old friends had gathered at his place for dinner. Because Ashokkaka could not hear much of the conversation properly, he was mostly quiet. But then suddenly he announced: “Now I will tell a story!” And then he proceeded to regale us all with several entirely new (for me) amusing anecdotes about people we knew, with extraordinary level of detail and quirky humour.

He could also be very caustic and cutting on occasion. More than one friend and acquaintance has suffered his tongue-lashing, and the full force of his disapproval could be severe. But he carried no malice. So mostly, he realised and regretted alienating them, and sought eventually to make up with them. There were some exceptions: people he did not minding parting with because he had nothing but disdain for them. Of course, it pained him – and even enraged him – that his trenchant critiques of Left parties and Left governments were not taken on board and were often simply ignored. But the passion with which he argued on these grounds essentially reflected his deep and abiding commitment to progressive politics.

The range of his friends and acquaintances constantly surprised me. When he first stood for election in 1977 in Kolkata, as a candidate supported by the Communist Party of India (Marxist), my sister and I went to campaign for him. Before that, I had put in a tentative call for donations for his campaign – and I was amazed at the response, from senior and fairly conservative bureaucrats to students to journalists and others, who all wanted to contribute. Our in-kind contribution to that particular electoral campaign may have been more debatable: for several years thereafter, he would proudly state that he had managed to win despite being handicapped by the over-enthusiastic support of these two Anglicised young women from New Delhi.

He could be embarrassingly indiscreet as well. I still remember my discomfiture several decades ago when my own indiscretion was magnified by his actions. I went to study in Cambridge, and after the first two months sent him quite a long letter with my impressions, including several frank, revealing and not completely polite references to some of my teachers there. Apparently, he enjoyed the letter – so much so that over the next few months he proceeded to read it out to several visitors from all over the world on different occasions, including to one of the very same teachers about whom I had written in somewhat less than flattering terms. To her credit, she was generous enough not to hold it against me, but to this day I blush when I remember it.

In that letter, I also mentioned Joan Robinson’s description of his own foray into politics: “The CPI(M) is the best of a bad lot but that’s not saying much. AM is misguided and probably will become even more so,” she had told me at a party. Sure enough, it was a matter of time before he confronted her about this, quoting me as the source of information – earning me some disapprobation from that quarter. I learned the hard way that he simply assumed that everyone would share his ironic appreciation of criticism, without misunderstanding it.

Yet despite all this, he was also a deeply private person, especially in personal matters. That must have made his last phase excruciatingly difficult for him. He hated and resisted being physically dependent and valued his privacy and independence even when his bodily frailty required him to give up some of it. His last few years were undoubtedly difficult: He was lonely living alone, forced to witness political developments that caused him immense anguish even though he had predicted some of those outcomes, had to deal with quite a lot of physical pain, progressively lost his hearing and his eyesight – unimaginable for someone who lived by the written word. Yet his mind remained razor sharp.

Perhaps only someone with his incredible memory and inner resources could have gone through those twilight years with his mental faculties intact. I remember walking into his study one evening late last year, when he was sitting in darkness – because, as he said, it made no difference to him whether or not there was light. I asked him what he was thinking about, and he said he was remembering various songs of Rabindranath – particularly the phrase in one of them, “shanto shurer shantwana”. Then he looked at me quizzically and said, “Now what about the possibility of the case against GST? At least bring out a proper public statement!”