As Freebie Debate Rages, What Defines 'Revdi'? Nobody Really Knows.

There are no watertight categorisations that clearly demarcate where a subsidy ends and a so-called freebie begins. 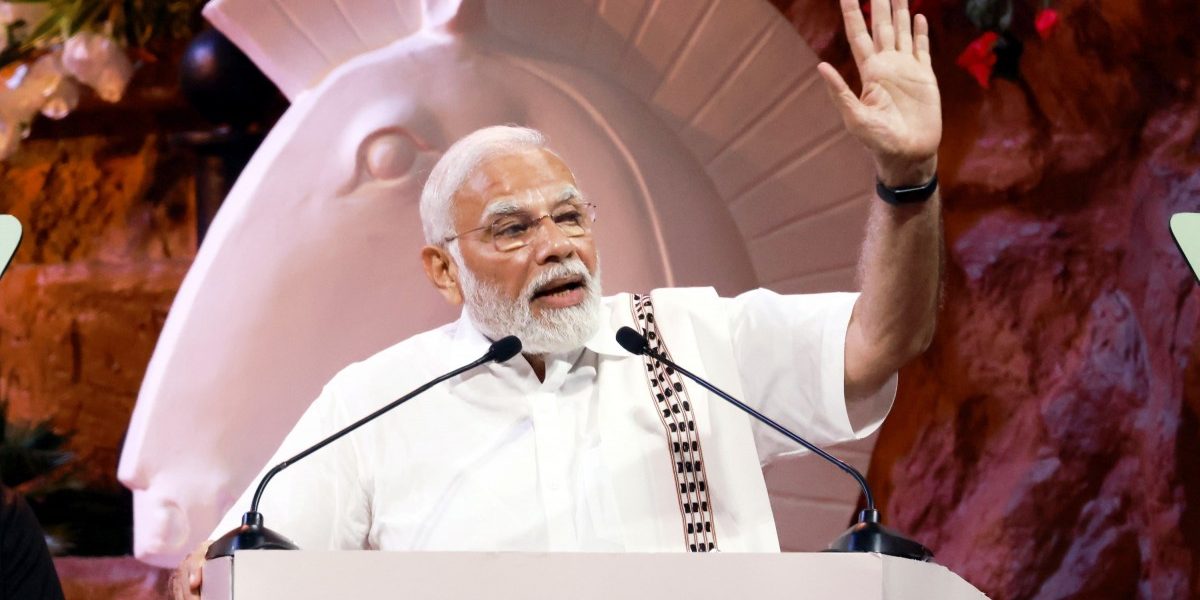 Amaravati: A maelstrom has been brewing in the political landscape over the precise markers of a subsidy and a freebie. Prime Minister Narendra Modi delivered the first blow last month when he pointed out that other political parties were propagating a “revdi culture” which was dangerous to the youth as well as to the prospects of development in the country.

The political barb seems to have hit its mark considering that Delhi chief minister and Aam Aadmi Party head Arvind Kejriwal, without skipping a beat, delivered an impassioned rebuttal, demanding to know if providing quality education and medical services could be considered as doling out revdi.

The matter escalated further when the Supreme Court, in its wisdom, decided to admit a PIL by Bharatiya Janata Party leader Ashwini Kumar Upadhyay. The PIL, which seeks a clampdown on “irrational freebies” is premised on simplistic and unrefined arguments and betrays its own classist tendencies abundantly. For instance, it states that people who go for work under MNREGA, reportedly, only “chit-chat and play mobile games without doing the work” adding that freebies only “create/inculcate laziness among people, shattering the work force of the state”.

The petition prodded the DMK to step into the fray. It, rightfully, argued before the apex court that welfare schemes providing free services with an intent to minimise income inequalities, status and opportunities, can by no stretch of imagination, be construed as a freebie. In its written submissions, the DMK took the Modi government to task, pointing out that in its first three years, loans worth Rs 72,000 crore of the Adani group had been written off whereas PSBs had written off loans worth Rs 7.27 lakh crore between FY17 and FY22.

“Are these not freebies for corporates? What is the justification for wanting to prevent welfare measures like food, education and travel subsidies for the poor and downtrodden but continuing to give large tax breaks for corporates? This is the culture we need to end, not target the hungry stomach of the farmer or the educational aspirations of a child from the poor and downtrodden background,” the DMK reportedly said.

For now, there is no overarching statutory or legal definition of subsidy. Administratively, economically and fiscally, a subsidy has, for long, been integral to the vocabulary of governance with deep repercussions on the social security fabric of the nation. There are no watertight categorisations that clearly demarcate where a subsidy ends and a freebie begins. The boundary between the two is blurred, and a recent article by the Reserve Bank of India not only adds to the perplexity underpinning the hotly-contested topic but also also shines the light on how purported economic wisdom does not necessarily align itself with basic norms of welfare governance.

The article, carried by the central bank in its June 2022 bulletin titled, “State Finances: A Risk Analysis”, attempts to distinguish between subsidies and freebies, while conceding that there is no precise definition on freebies.

“…it is necessary to distinguish them (freebies) from public/merit goods, expenditure on which brings economic benefits, such as the public distribution system, employment guarantee schemes, states’ support for education and health. On the other hand, provision of free electricity, free water, free public transportation, waiver of pending utility bills and farm loan waivers are often regarded as freebies,” it states. 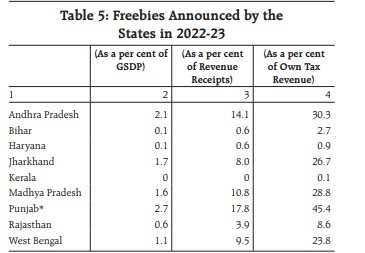 The article goes on to display a data set on the freebies announced by states in FY23. However, a look through the annexures reveals a number of social welfare schemes that contribute massively to the advancement of farmers, women, children, health, education and other livelihood prospects. This begs a larger sociological question on the nature of governance and the kind of state – a laissez-faire or a welfare-oriented one – that would better serve the interest of a nation and its people?

Consider, for instance, that for Andhra Pradesh, the RBI article categorises Jagananna Ammavodi – a financial assistance scheme under which Rs 15,000 is given to students’ mothers to send their children to school – as a freebie.

YSR Cheyutha – another scheme that provides financial assistance of Rs 75,000 to women in the age group of 45-60 years belonging to SC, ST, OBC and minorities to improve their livelihood – is again dubbed a freebie. YSR Rythu Bharosa, under which Rs 7,500 is disbursed for every farmer’s family including tenants and Rs 13,500 to landless cultivators belonging to SC, ST, OBC and minority groups, is also deemed a freebie. YSR Nethanna Nestham, which provides Rs 24,000 per annum to every handloom owning weaver family to modernise equipment, is also a freebie.

In the case of Bihar, the Sashakt Mahila, Saksham Mahila scheme and which provides cash incentives to female students for completing senior secondary and graduation is a freebie. So is the case with Indira Gandhi Matritave Poshan Yojana implemented in Rajasthan which provides financial assistance of Rs 6,000 on birth of a second child to pregnant women.

In Haryana, financial assistance of Rs 21,000 on birth of first and second girl child to SC and BPL families under the Aapki Beti, Humari Beti (Ladli) Scheme is a freebie to the state. In West Bengal, a one-time grant to the family of the deceased farmer under Krishak Bondhu is a freebie. Electricity subsidy provided to farmers and poor people in Jharkhand, Madhya Pradesh and Punjab are all labelled as freebies.

Such a myopic reading of a welfare scheme reduces the state to an economic entity divorced and unconcerned with the plight or the progress of its people. These welfare schemes, wherever they are implemented – be it in a BJP-ruled state or not – provide basic necessities to the poorest households across India. In any case, the talk on “revdi culture” was, at most, nothing more than empty bluster. If not, then it is presently an option for the BJP-ruled states to roll back the welfare measures painted as freebies by the RBI article. Doing so will come at a massive electoral cost but will show that the BJP is willing to put its money where its mouth is.

Will it do so?