With 73.5 lakh job losses, the number of employees, both salaried and non-salaried, fell from 39.81 crore in March to 39.08 crore in April, for the third straight month. 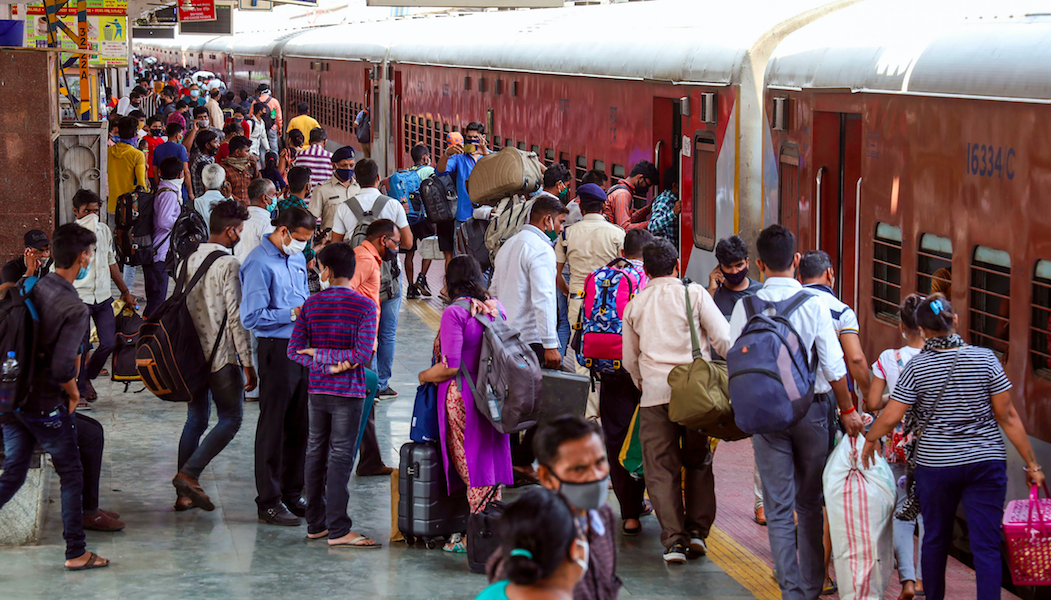 Migrant workers at Thane railway station to board outstation trains for their native place, amid the rise in Covid-19 cases across the country, in Thane, Thursday, April 15, 2021. Photo: PTI

New Delhi: With seven million job losses in April, India’s unemployment rate rose to nearly 8% in April, the highest in the last four months, as the second wave of pandemic ravages the country, NDTV has reported citing the data released by Centre for Monitoring Indian Economy (CMIE).

The national unemployment rate in April climbed to 7.97% from 6.5% in March and 6.89% in February, and urban unemployment increased to 9.78% as against 7.27% in March. With 73.5 lakh job losses, the number of employees, both salaried and non-salaried, fell from 39.81 crore in March to 39.08 crore in April, for the third straight month. The number of people employed in India stood at 40.07 crore in January.

On the other hand, the employment rate fell from 37.56% in March to 36.79% in April, which is a four-month low. The monthly data also showed that the number of people who were unemployed yet not actively looking for jobs has increased from 1.60 crore in March to 1.94 crore in April.

The job losses are attributed to series of curbs, including lockdowns, being announced by state governments to contain the spread of the second wave of COVID-19 infections. As a result, a number of people working in different cities and towns have left for villages due to the closure of economic activity. Additionally, it has also dashed hopes of any recovery to the economic activity seen after a dip in infections towards the end of last year.

With the cases still rising the road ahead for the economy looks bleak. Barclays Bank Plc on Monday lowered its forecast by one percentage point to 10%, as “there is growing uncertainty around the number of cases and fatalities,” economist Rahul Bajoria wrote in a research note. “Slowing vaccinations are also hurting India’s recovery prospects.”

A separate survey released on Monday by IHS Markit showed the manufacturing sector was still losing jobs in April, though the rate of contraction was the weakest in the current 13-month sequence of job shedding.