After BJP’s Botched Agricultural Policies, Farmers Will Now Have to Face the Bite of Inflation

In a research report released on March 29, Kotak Institutional Equities estimates an 11-15% increase in input costs for the farm sector in FY '22.

After rampant suicides, indebtedness, irremediable poverty, malnutrition and widespread illiteracy, there is another spectre bearing down upon India’s farmer: inflation.

In the aftermath of the Russia-Ukraine crisis, fertiliser prices have been racing up to levels that threaten to make farming downright unaffordable for the small farmer.

Other ingredients that are key to manufacturing fertilisers such as ammonia (243.94%), sulphur (82.98%) and phosphoric acid (67.3%) have all registered income eroding price hikes.

Price of urea is regulated by the government and the demand for it is mostly met from domestic sources, however, prices of DAP and MOP are not regulated and the major part of the requirement is imported from overseas. Russia along with the allied nation Belarus accounts for 40% of exports in the MOP market. The former also is one of the five largest DAP exporters in the world.

The prodigious role that Russia plays in the fertiliser market can be assessed from the comment made by Nomura in a note released on March 4, which points out that within the fertilisers segment, Russia accounts “for over 17% of Muriate of Potash and approximately 60% of NPK (nitrogen, phosphorus, potassium) fertiliser imports.”

The unending woes of rural India

In a research report released on March 29, Kotak Institutional Equities estimates an 11-15% increase in input costs for the farm sector in FY ’22.

“In our view, the government may be compelled to significantly increase minimum support prices (MSP) of various crops in order to (1) compensate for the sharp increase in input costs of agricultural production and (2) support the weak rural economy; adverse terms of trade have affected farm households and weak rural wages and jobs non-farm households. However, higher MSPs may contribute to food inflation, which will increase overall inflation.” the report states.

Over the years, the nominal rural wages for agricultural labourers have taken a hit. Between April and November 2021 the average nominal agricultural wage growth slumped to 2.35% from 6.6% during the same period in 2020. Similar is the case with the wages of non-agricultural labourers who saw their wage growth rate go down from 7.95% in April and November 2020 to 1.8% during the corresponding period in 2021.

A woman removes stalks from red chilli peppers at a farm in Shertha village on the outskirts of Ahmedabad February 6, 2019. Photo: Reuters/Amit Dave/File

But nominal wages by themselves mean little. To capture the bigger picture, one has to account for the inflation rate. With inflation raging, the actual purchasing power of the same wage plummets momentously. Between FY ’16 and FY ’20, the real wages of agricultural labourers took a crushing blow. Agricultural labourers involved in ploughing/tilling and harvesting/winnowing saw their real wages increase by less than a percent between FY ’16 and FY ’20.

In fact, in FY ’20, agricultural labourers performing harvesting, winnowing or threshing activities saw negative real wage growth, which is to say, that elevated inflation eroded their purchasing power leading to a situation where lakhs of workers found that they could purchase fewer and fewer goods for the same or higher wages. A diminishing of the purchasing power of one’s wages is often accompanied by a drop in the standard of living.

The fall in the real wage growth rate explains the erosion of domestic savings at the rural level and the increasing incidence of labourers getting entrapped in a debt spiral. Their situation hasn’t improved thus far. Real wages of agricultural labourers turned positive for a brief phase in FY ’21 before returning to the negative territory in FY22.

In this regard, the Kotak Institutional Equities report goes on to observe, “We note that nominal rural wage growth has been muted in FYTD22 and real wage growth has trailed inflation leading to a decline in real wages. In our view, the weakness in the non-farm economy reflects (1) a large shift in employment from manufacturing and services to agriculture during the pandemic and (2) persistent demand from MNREGA. Government allocation for the rural sector will remain weak in FY2023; it is difficult to expect a sharp recovery in non-agricultural demand.” 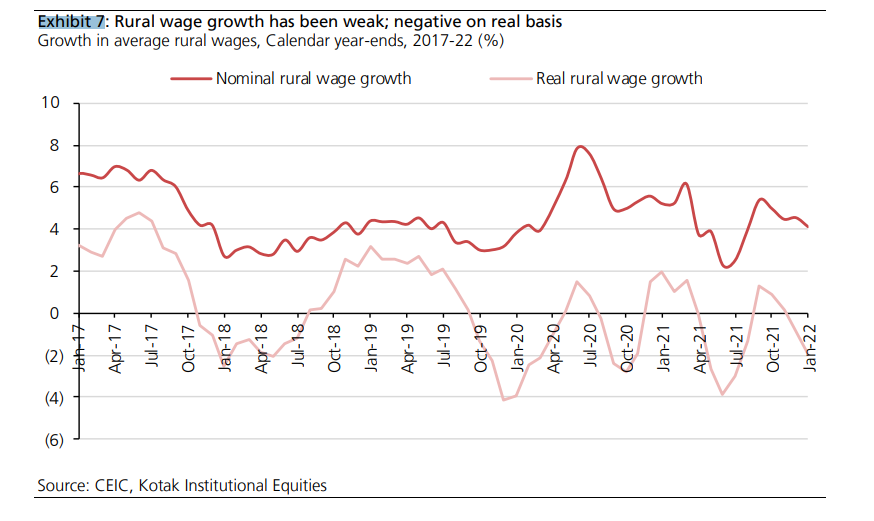 It was in the aftermath of the pandemic that India witnessed an unprecedented reverse mass migration of labourers from factories to farmlands.

Between FY ’19-FY ’20, roughly 12-13 million labourers finding no avenues of fruitful employment in the industrial landscape had little option but to revert to agriculture as their sole means of subsistence. Meanwhile, demand for work from MGNREGA is still quite high, however, on the ground, the actual generation of employment lags by a big margin. At such a critical juncture in the economic trajectory of the country, the finance minister has opted to scale down the allocation to the workfare scheme by 25%.

Lastly, the research report punctures one big hope that the government was hoping to extract from the Russia-Ukraine crisis.

India has been looking to corner a piece of the food grains exports market considering the vacuum left by Russia and Ukraine in the aftermath of the war. The Indian government has also managed to export a sizeable amount of wheat this year and by all accounts is hoping to break through the 10 million tonnes wheat export mark.

While this ought to strengthen the government’s economic heft, the report points out that this will not “greatly benefit India’s 93 million agricultural households.”

“The Indian government has a large stock of food grains after it increased its procurement of food grains sharply during the pandemic. The disruption in global agricultural trade due to the ongoing Russia-Ukraine war offers India an opportunity to export its surplus food grains at high prices. Also, the increase in global crop prices has made Indian exports competitive, resulting in a jump in exports in 10MFY22. Rice, marine products, sugar and spices were key beneficiaries, while wheat exports have increased recently. However, an increase of $7.2 bn in exports will not greatly benefit India’s 93 mn agricultural households. Domestic realizations are more material for farm income.”

The flimsiest of inquiries into the BJP government’s track record as far as improving farmers’ conditions goes will reveal the monumental disasters that have been in the making since 2014.

During the FY ’23 Union Budget, there was nary a mention of doubling farmers’ income, a spiel that has repeatedly been trumpeted by the BJP government since 2016 without any accountability being furnished for the same.

Farmers’ incomes were going to double by 2022 if one was to believe the BJP leadership. In the latest budget, Union finance minister Nirmala Sitharaman could have taken an honest and bracing look at the flaming wreck that the target has devolved into but instead what farmers and people at large were served was another spiel of India entering a golden age of 25 years in the lead-up to India’s 100 years of independence.