Afghans Are on the Verge of a Severe Hunger Crisis. Their Govt Should Seek India’s Help.

Before the onset of severe winter, there is an urgent need to resume food aid through humanitarian agencies such as the FAO and WFP. 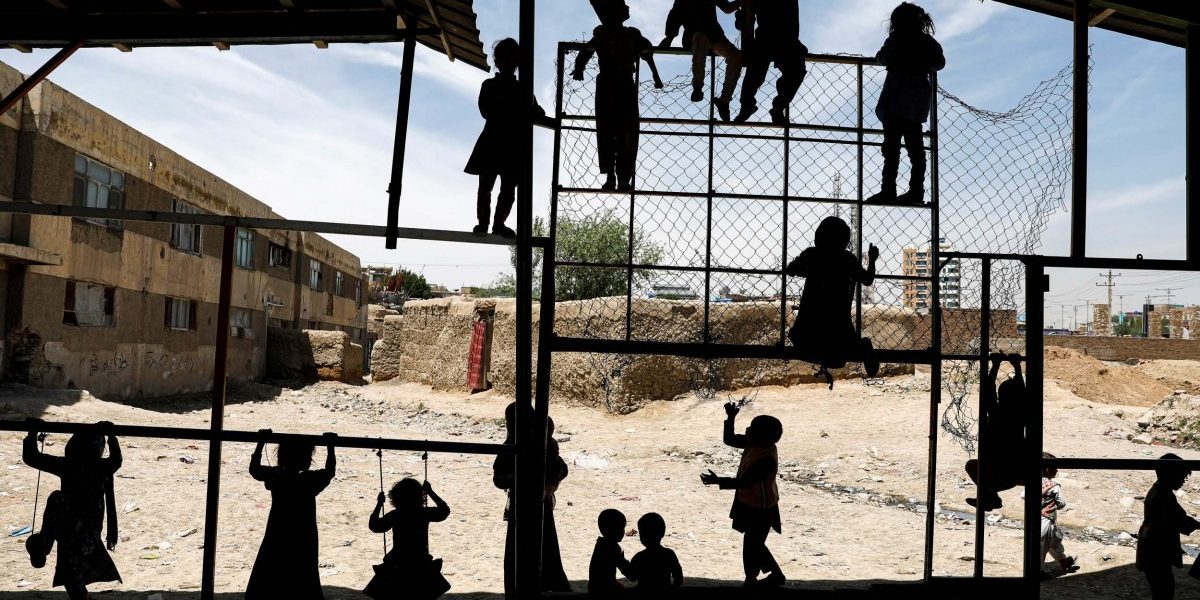 Internally displaced Afghan children play outside their shelter, amid the spread of the coronavirus disease (COVID-19), in Kabul, Afghanistan May 7, 2020. Photo: Reuters/Mohammad Ismail/File Photo

Afghanistan today faces a serious humanitarian crisis. Already a volatile economy that was extensively dependent on humanitarian and developmental aid, a country that has suffered about 40 years of protracted armed conflict, Afghanistan is currently in a fragile state. Media pictures of hungry Afghans may not disturb its Talibani rulers, but the plight of ordinary citizens would be a cause of serious concern to countries sharing a boundary with Afghanistan.

It is estimated that about half of the country’s population, approximately 14 million people, are food insecure. The World Food Programme estimates that 200,000 children are malnourished and about 22.8 million Afghans or more than half the country’s population will face acute food insecurity in 2021 itself. The United Nations Office for the Coordination of Humanitarian Affairs (OCHA) seeks a flash appeal of $606 million to provide “prioritized multi-sectoral assistance to 11 million people till the end of the year”. If global help does not reach in time, the coming winter may witness large scale starvation.

Reasons for the ongoing humanitarian crisis

The four main dimensions of food insecurity defined by FAO include – the physical availability of food; economic and physical access to food; food utilisation; and stability of the above three dimensions over time. It is estimated that more than 80% of the country’s area has seen a serious drought in 2021. In 2017, 2018 and 2019 also, it faced major drought and occasional floods (2020).

Afghanistan is classified among the nations with the most climate-sensitive agricultural production. The largest producer of opium, Afghans also grow rice, corn, watermelon, pomegranate and saffron through subsistence farming. According to reports by the WFP and the UNEP, 2016, Afghanistan is already facing severe climate relating flooding caused by heavy rainfall over a short period and rapidly melting snow in northern and central mountain glaciers.

In 2017 alone, climate shocks that include floods and drought negatively affected the food security status of 7.8 million Afghans. It is estimated that from 1950 to 2010, Afghanistan warmed 1.8 degrees Celsius — about twice the global average. All these factors in addition to political transition have resulted in soaring prices for wheat flour, cooking oil and other essential commodities.

Also read: Can the World Rescue Afghanistan from Mass Starvation, Bypassing the Taliban?

The continuation of La Nina will result in another drought season worsening the food stocks and supplies affecting rural areas where 70% of the population resides. The Kuchi nomads, more than 2 million in number, one of the poorest and most marginalised groups in Afghanistan, are the worst hit due to the depletion of resources, lack of access to clean drinking water and unavailability of pastures for their livestock. The National Vulnerability Analysis Report of Afghanistan indicates that conditions are far worse for Kuchi girls and women as compared to other poor women in the country. The urban areas of the country also face distress due to loss of income resulting from Taliban’s inability to bring economic stability.

With the Taliban takeover, around $9.5 billion worth of national assets have been frozen. The banking system is in crisis, high inflation, the depreciation of the Afghani, the country’s currency, the loss of jobs is making people desperate. Large number of previously employed people have not received their salaries for months, reducing their purchasing power. WFP market and price monitoring shows a decline of 50% in the number of days of work available for casual labour in urban areas between July 2021 and September 2021.

Afghanistan is hugely dependent on foreign aid – about 40% of its gross domestic product (GDP) comes from international aid, according to the World Bank.

The United Nations Development Program’s October 2021 assessment shows that 97% of Afghan households could be below the poverty line before mid-2022 if its economic crisis is not addressed.

3. Hunger is used as a weapon by insurgent groups

Poverty in addition to the humanitarian crisis increased as the conflict intensified during the harvest period resulting in the increased displacement of Afghans. Forced migration severely impacts food security in the long run. Till September 2021, around 6.6 lakh people were displaced due to conflict and other related factors. Local and regional supply chains have been interrupted.

The need to engage

India has never been shy in providing humanitarian assistance especially to its immediate neighbours under Humanitarian Assistance and Disaster Relief (HADR). The 2004 tsunami, the 2005 India-Pakistan earthquake, 2008 cyclone Nargis (Myanmar), the 2014 water crisis in the Maldives, Operation Maitra in 2015 for the Nepal earthquake, and the 2017 cyclone Mora,( Bangladesh and Myanmar) are all examples of how India has been acting as  a “first responder” to help its neighbours  during emergencies.

Several countries have now realised that the international borders are not able to prevent migration if a crisis situation resulting from violence, war or economic downturn continues for a long time. Attempts by large number of desperate migrants from Africa into Europe and from Latin America into the US is proof of the need to maintain peace, stability and economic progress everywhere.

This current crisis is continuing due to the failure of Taliban to form an inclusive government and earn global recognition. Despite the demands of international community, Taliban have so far shown no inclination to include minority communities and women in the government.

Despite this, humanitarian aid based on the principles of neutrality, impartiality, operational independence and humanity needs to flow to the people, even if it is not routed through the Taliban-led government.

India’s relationship with the people of Afghanistan has deep cultural and historical roots. India has helped rebuild Afghanistan’s infrastructure and institutions.

Also read: How AUKUS and the US Retreat From Afghanistan Will Change South Asia’s Strategic Landscape

Indian aid to Afghanistan exceeds $3 billion. Despite the refusal of Pakistan to allow export of Indian wheat by road from Wagah border in Punjab, India had donated one million tonnes of wheat (worth Rs 476.47 crore) between 2011-12 and 2014-15. This was transported by rail to Kandla port, then by ship to Karachi and finally by road from Karachi to Afghanistan. From October 2017, the Chabahar port in Iran has become operational and now it is possible to bypass Pakistan. In 2020-21 also, India provided about 75,000 tonnes of wheat.

Before the onset of severe winter, there is an urgent need to resume food aid through humanitarian agencies such as the FAO and WFP. UNICEF is already setting up a system that will allow direct payments to teachers without the funds being channeled through the Taliban government.  Since almost 97% of Afghan households could be living below the poverty line by mid-2022, the UN has come up with a plan to set up a special trust fund to provide cash directly to Afghans by tapping into donor funds, frozen since the Taliban takeover.

The world is in the middle of high food prices. The FAO Food Price Index (FFPI) in October 2021 was 31.1% higher than October 2020. The cereal price index is also higher by 22.4% over last year. India is also facing the brunt of high edible oil prices due to its dependence on import. Untimely and excessive rains in several parts of India have damaged the crops. So India is not really in a position to offer much food assistance. However, the country is carrying record high stock of food grains, wheat and rice due to excessive procurement in the last three years. India would be making good use of it by providing five to ten lakh tonnes of food grains to Afghanistan. In addition, India can also provide biscuits, baby food, eggs and buffalo meat.

The Delhi Regional Security Dialogue of November 2021 has resolved that humanitarian assistance should be provided to all the sections of the Afghan society without any discrimination. The Taliban administration will do well to honour this advice from its neighbours and save its own people from hunger and starvation.

In the longer term, Afghanistan should make prudent use of water by conserving traditional irrigation system of Karez. That is the only source of water in the rural areas in the southern and southwestern regions. It should also seek Indian assistance to modernise its agriculture. India has the scientific expertise to breed seeds suitable for different agro climatic zones in Afghanistan. Indian seed companies, mostly in private sector have revolutionised the production of fruits and vegetables by developing hybrids. Tissue culture is extensively used in India to produce bananas.

If the Taliban is concerned about international recognition of their government and the welfare of common Afghans, they have to provide security assurance to the international community, form an inclusive government, induct women in the government at all levels and provide guarantee that its territory will not be used for violence against any country.

Sarah Khan has done her MPhil on food policy at the University of Cambridge. Siraj Hussain is Visiting Senior Fellow, ICRIER.