Activists Reject Jaitley's Claim of Highest Ever Allocation for MNREGA

Arun Jaitley's budget gives a lot of attention to rural employement schemes and the Aadhar card, both key initiatives of the UPA 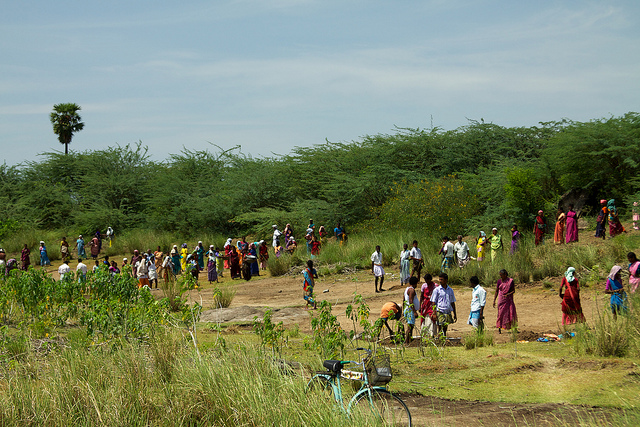 Rural villages digging out a silted-up water tank in their community as part of the Rural National Employment Guarantee Act (NREGA), a scheme where every Indian is guaranteed the right to 100 days paid work in a year for unskilled manual labour. If I remember right, they are guaranteed INR 100 a day. I love the colour and sense of community in the image. This was the first I’ve actually seen NREGA work going on in a community. For more background on this programme, you can start here: http://india.gov.in/sectors/rural/national_rural.php

The General Budget of the NDA Government for 2015-16, presented this Monday, gave prominence to two star initiatives of the UPA Governments – the Mahatma Gandhi National Rural Employment Guarantee Act (MGNREGA) and the Aadhar card. Union Finance Minister Arun Jaitley announced that his Government will keep aside Rs. 38,500 crore for MGNREGA for 2015-16. He also said, “We will undertake significant reform including enactment of a law to ensure all Government benefits are conferred to people who deserve it by giving a statutory backing to the Aadhar platform.”

Jaitley told the Lok Sabha “If the total amount (of Rs.38,000 crore) is spent, it will be the highest budget spend on MGNREGA.” However, Nikhil Dey, a grassroots activist associated with the Mazdoor Kisan Shakti Sangh (MKSS) contradicted this claim: “The MGNREGA budget in 2016-17 is still below the highest ever allocation of Rs. 40,100 crore in 2010-11 and is highly insufficient for the programme today.”

“Looking at the current financial year (2015-16), the total expenditure as of date is around Rs.37,000 crore which excludes pending liabilities of around Rs.6,000 crores. Together, it is around Rs.43,000 crores. This still does not include the lag in data entry and employment during the month of March 2016. This would be at least Rs. 3,000 crores. Add to this the amount on account of inflation at approximately eight per cent which would be approximately an additional Rs. 4,000 crores. So, it is safe to say then that any allocation less than Rs. 50,000 crores would be insufficient as per current rates of employment,” Dey told The Wire. “In other words, the present allocation of Rs.38,500 crores is actually a budget cut.”

Earlier in the day, in a joint press note released with activists Aruna Roy and Annie Raja — also from MKSS, Dey said, “If the MGNREGA were to continue as per the allocations in 2010-11 while adjusting for inflation, the current allocation would have to be Rs.65,000 crore.”

“We can’t also go by the assurance of the Government that it will provide additional funds as required under the law, as the Finance Minister failed to live up to his promise made in last year’s Budget speech that he would provide an additional Rs.5,000 crore if the need were to arise,” the note said. “He only provided an additional Rs.2,000 crore while workers in many States, including the drought-hit ones, have been going without wages or work.” On December 30, last year, Union Rural Development Minister Birendra Singh had sent a letter to the Finance Minister reminding him about his 2015 Budget speech promise of providing the additional sum of Rs.5000 crores as 12 States had a negative balance of MGNREGA funds for the 2014-15 financial year.

The activists said, “At a time when MGNREGA is now acknowledged as being vital for the survival of rural India and plays an important role in supporting rural growth and employment, it is crucial that we watch the budget as per legal and financial requirements and do not allow the Finance Minister and the Government to mislead people through empty rhetoric and grand statements of sufficient funding.”

Both Roy and Dey had also filed a petition in the Supreme Court in raising concerns over the Aadhar scheme, launched by the UPA II Government in 2009. Now, with the NDA Government planning to give the scheme statutory status, Dey said, “The nature of the law is to be seen considering both the palm biometric recognition and the iris scan version of it don’t always work. The SC has already said the card should be voluntary.”

Activists have expressed apprehension over the possible infringement of personal liberties and privacy with Aadhar being made mandatory for welfare schemes. In response to the petition, the SC had directed last year that the authorities couldn’t insist on a citizen to produce his Aadhar card but at the same time extended the voluntary use of the card to MGNREGA, all pensions schemes, employee provident fund and the Prime Minister Jan Dhan Yojana. A Constitutional Bench of the apex court, led by Chief Justice H L. Dattu, had said the purely voluntary nature of the use of Aadhar card to access public service would continue till the court takes a final decision on whether the Aadhar scheme is an invasion of the right to privacy.