Won't Be Mediator in Kashmir Dispute Unless India, Pakistan 'Ask for It': Norwegian PM

Mediation has to be “partner driven” by “those who are part of the conflict”, Erna Solberg said. 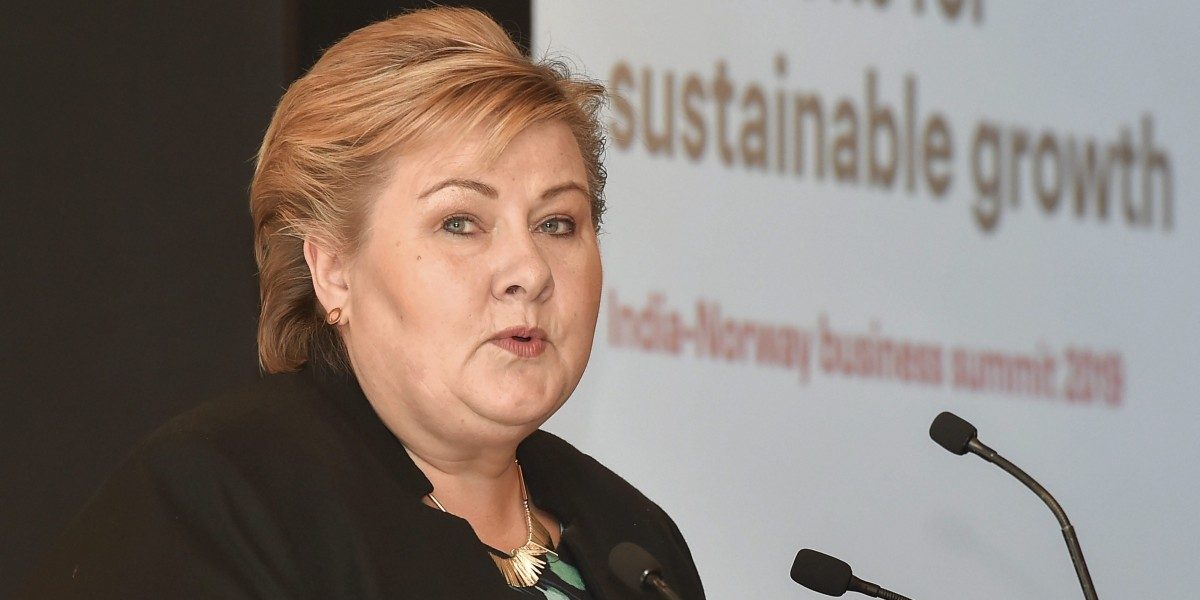 New Delhi: Norwegian Prime Minister Erna Solberg began her visit to India by asserting that Norway will only be a mediator in Kashmir if both India and Pakistan assent, but added that both countries were “big enough” to decrease tensions without outside help.

Solberg arrived in Delhi on Monday for a two day visit – the first by a prime minister of Norway in ten years. She will inaugurate the Raisina Dialogue on Tuesday, along with Indian Prime Minister Narendra Modi.

The questions about Norway’s interest in the Kashmir dispute have surfaced since former Norwegian Prime Minister Kjell Magne Bondevik was in the Valley in November 2018. His visit was facilitated by the Bangalore-based Art of Living foundation.

Last month, Indian external affairs minister Sushma Swaraj told parliament that New Delhi “was not involved in organising the visit and meetings”. She added that Indian government’s policy remained that “there is no scope for any third party role or mediation”.

Speaking about her predecessor’s trip, Solberg said that Bondevik went to Kashmir as a “private citizen”.

“He has an institute for peace and security, which is a private institute in Norway. It is was not part of any government plan to be involved in negotiated. He was invited and he went… Our government policy is very clear. if we are going to help somewhere, they have to ask me for it. It’s not an initiative which comes from the outside,” Solberg told reporters at the inauguration of the new eco-friendly building of the Norwegian embassy.

When asked if Norway wants to be a mediator in the Kashmir dispute, she answered in the same vein.

“It’s true that Norway has done a lot of work on mediation for peaceful settlement. Last one was Colombia, which was successful. I am sorry to say Sri Lanka was not a big success. I am still sorry about how the conflict in Sri Lanka ended up (referring to the large number of civilian casualties which marked the military victory of Sri Lankan security forces over the Tamil Tigers). But one of the most important parts of that is that nobody from outside can create peace or make changes. It has to come from inside,” she said.

She went on to say that if both India and Pakistan moved towards talks, “we and other countries, we can help in mediating, if there is a possibility”.

But it had to be “partner driven” by “those who are part of the conflict”. “Both India and Pakistan are big enough countries that they can decrease tensions between them without help from outside,” said Solberg.

Earlier, during an interview to Indian television channel NDTV, she was asked whether Norway was “stepping in” between India and Pakistan.

“If there is an interest from the partners, we will try to use the mechanisms that we know. We have been working quite a lot in different countries but we always have this one basic thinking. The partners need to want to sit down by the table and discuss. Then, of course, if there is a need for a mediator, a need for a facilitator to fix, even though these are two very big countries that should manage to sort out things between themselves,” she reiterated.

With India not willing to have any third party involved in the dispute, there is no possibility of Norway or any other international entity to act as a mediator. Pakistan has a diametrically opposed position.

With some media reports interpreting Solberg’s remarks as an interest in mediating between India and Pakistan, Norwegian ambassador to India Nils Ragnar Kamsvåg posted on his Twitter account that Norway had “neither been asked or offered to mediate”.

While she said that Norway could only intervene if asked, Solberg added, “I personally don’t believe a military solution solves problem. I believe in a peaceful solution.”

“I mean you can have a victory to a military activity, but you still will have problems within…it is not about Kashmir directly but all places involved. We see that in Syria. Even if there might be a solution, it will not be a long lasting solution because you really need to cooperate between partners to create that,” she said.

Meanwhile, she carefully indicated that both countries will have to decide when they are ready for talks, but citing good Scandinavian neighbourliness, noted that decrease in tensions would lead to lower expenditure on defence.

“It has to be Pakistan and India together who find the time when they want to start talks about things. And I do believe in all countries where you have maybe higher military expenditure because you are not so friendly with neighbours, as we are with our Swedish neighbours, there is a possibility of using less money on military and using little bit of more money on education and health..,” she stated.