With China, India Has Revealed a Blind Faith in Diplomacy

It is clear that other than the cosmetic disengagement from friction points, nothing more can be expected as New Delhi has failed to create any ‘pressure points’. Despite India’s continuing faith in dialogue, diplomacy and existing protocols with China for resolving the LAC standoff, it is clear that other than the cosmetic disengagement from friction points that has materialised, nothing more can be expected as New Delhi has failed to create any ‘pressure points’ (barring the occupation of Chushul heights) to force Beijing into implementing restoration of status quo ante.

India has rejected a Chinese proposal to prioritise de-escalation over disengagement.

While this will let PLA intrusions remain intact, it will help in defusing tension by withdrawal of heavy equipment like tanks and guns. The capacity constraints and the power differential do not allow India to exercise any punitive options other than on trade and investment which hurt it more than they do China.

The option to create a pressure point in the maritime domain has not been developed into one usable though this month some tentative steps were taken towards shaping a maritime deterrent by expanding Malabar naval exercises, strengthening Quad and sealing foundational security agreements with US.

On its own, India cannot restore status quo ante (fait accompli on the ground). The cumulative gap in conventional and strategic forces with China cannot be bridged without an external balancer and/or a concert of countries that are tied in a military structure like NATO with an Article 5 to invoke collective response to aggression.

Geography lends to the creation of such a deterrence in the maritime domain. But India will have to set aside its reservations of joining a maritime security grouping. In 1971, India creatively signed up the 20-year Indo-Soviet Treaty of Peace Friendship and Cooperation to fight the war against Pakistan, to deter China and US and manage the UN Security Council. Inserted in the Treaty were two clauses: consultations in the event of threats to security of either country and that India remain non-aligned, so sensitive was New Delhi about strategic autonomy.

Can the US be India’s erstwhile Soviet Union?

Will both countries be willing to go beyond the current Comprehensive Global Strategic Partnership?

This week, the US foreign and defence policy duo of Mike Pompeo and Mark Esper were in New Delhi for the third 2+2 dialogue just days before the US presidential election. Both have targeted China, the world’s number two military and economic power and particularly the Communist Party of China, for bullying, aggression and bad behaviour – characteristics alien to civilised nations and civilisational states.) 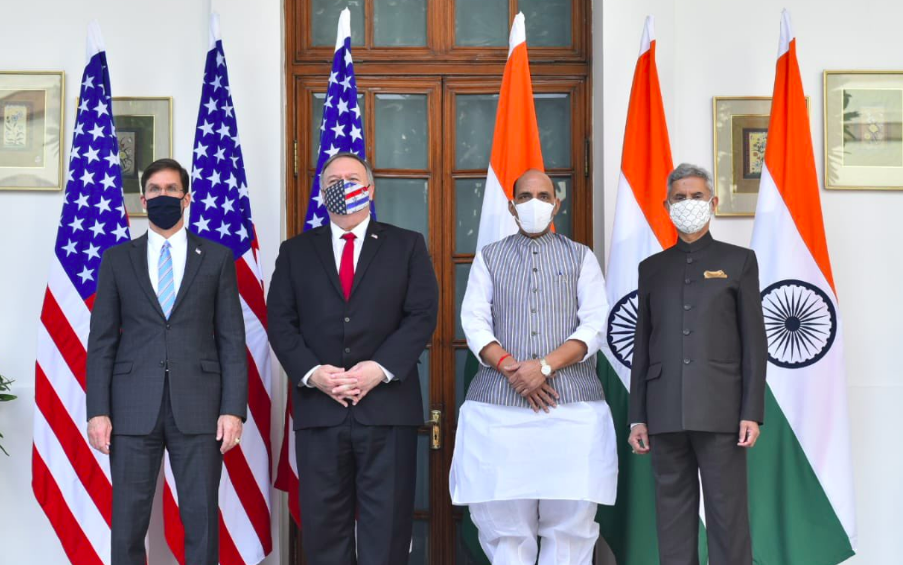 National Security Advisor Robert O’Brien warned India that its faith in dialogues and agreements with China will not work.

The Pompeo meeting with Jaishankar was the second this month after the Quad conclave in Tokyo. Overcoming its strategic hesitation over annoying China, India invited Australia to rejoin the annual Malabar drills it left in 2007 for the same reason, virtually militarising the Quad of the same four countries – India, US, Japan and Australia – that participate in naval drills and oppose China’s hegemonic behaviour. What Quad needs now is an operational charter, a security-weighted secretariate and a rules-based code of conduct for a free and open Indo-Pacific.

Interestingly only India among the Quad countries shares land border with China. 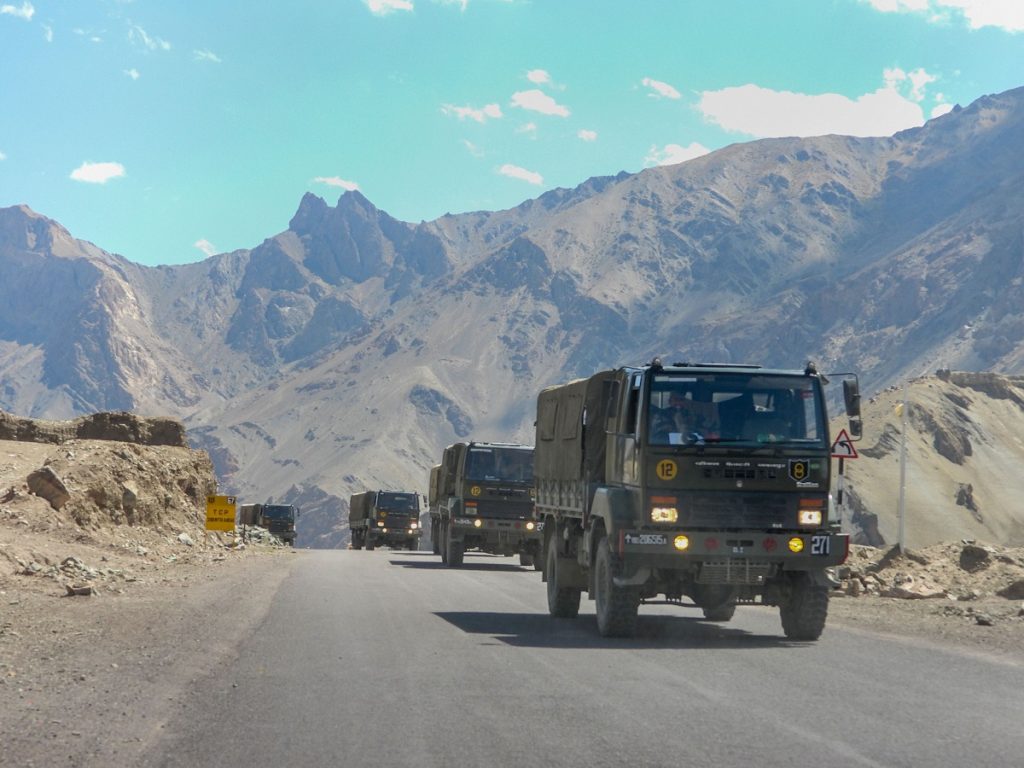 Army trucks move towards the LAC in eastern Ladakh, amid the prolonged India-China stand off, September 12, 2020. Photo: PTI

The Indian Navy is the natural fulcrum of Malabar/Quad at least in the Indian Ocean Region and according to US strategic thinkers at the heart of the Indo Pacific Strategy. The resource handicap of the Indian Navy which receives jut 15% of defence budget requires its allocation to be enhanced to at least 20 to 25% to catalyse its blue water capability.

The strategic imperative of a right balance between continental and maritime strategies was realised way back in late 1980s when Chiefs of the Army and Air Force volunteered a cut in their allocation to boost the Navy’s share. In addition, Indian Navy will need logistics exchange agreements in Diego Garcia, Mauritius, Reunion and Seychelles.

Last month, during a webinar, Lisa Curtis from the White House National Security Council stated that US would like India to assume the leadership role in the maritime domain (presumably in the IOR or Indian Ocean Rim). India taking the lead alongside the US was an idea first mooted by Admiral Harry Harris, CinC Pacific Command, in 2015. Pompeo told an Indian TV network during his visit that India and US can jointly deter (joint deterrence) China’s tyranny.

At the 2+2 meet, India signed up on the fourth and final foundational agreement – Basic Exchange and Cooperation Agreement (BECA) – which will enable India to target its long range missiles and armed drones when acquired to pinpoint accuracy, a facility available only to a few countries.

As a Major Defence Partner of the US, India will have access to high-tech military equipment. “We see each other for what we are, great democracies, and real good friends,” Pompeo tweeted before the talks. The whole range of India’s security concerns were addressed including the situation on LAC, counter terrorism, Indo- Pacific and Afghanistan.

There is one crowning irony in the turn of events precipitated by China’s intrusions along LAC. In its quest to wean India away from the US, it has willy nilly pushed New Delhi closer to Washington by its aggression.

China has rejected the Indian notion that there is space for both India and China to rise peacefully together. It has tried to prove that India is the subordinate power and Beijing’s writ will run in the region. This is what prompted Jaishankar and the Modi government in to making strategic ‘choices’ and taking some ‘risks’, Jaishankar buzzwords from his book, The India Way.

India has quietly signalled to China that it will no longer be hedging or balancing but will contain it if necessary with external players individually and in a concert of democracies. It will not be cowed down or bullied by aggression on LAC but will stand up to illegal and unilateral breaches of protocol to change the status of the LAC or border. Still there is a hint that even now India may not go all the way if China will roll back on LAC. Even so the expansion of Malabar exercises is the first potential step towards securitising the Quad which is integral to the Indo-Pacific strategy. Relations with US are being elevated to virtual strategic allies through issue-based geo-strategic partnerships. The India mission is to try to turn the common good Indo-Pacific Strategy into a countervailing mechanism on LAC by creating pressure points in IOR.

Meanwhile President Xi Jinping has continued exhorting the military to be ready for war. Last week, at the 75th anniversary of the Korean war, he warned invaders that force will be met with force.

Xinhua, the official Chinese news agency, took pot-shots at Quad and Malabar, calling it a ‘clique flexing muscles in the Asia Pacific Region’ adding that the Cold War mentality was visible in the bloc mulling military and security cooperation for self-serving political interests.

With Bihar elections underway the government has upped denial of Chinese aggression and loss of territory. The government’s lead spokesperson, Defence Minister Rajnath Singh, has been parroting India will not allow anyone to snatch an inch of land, clearly misleading the country on loss of face and land on the India-China border.

Still, the government received endorsement of its China policy from RSS chief Mohan Bhagwat. “Rising above China economically, strategically and securing cooperative ties with all our neighbours is the only way to neutralise [China’s] demonic aspirations,” he said in his Vijay Dashmi message.

Without naming China, NSA Ajit Doval simultaneously made a rare public articulation at Rishikesh on New India’s strategy of taking the war to enemy soil and source of threat. Taken together, the Bhagwat-Doval speeches seem to link India’s strategic thought to Hindutva. From sublime to the ridiculous, Rahul Gandhi’s latest shot at Modi is about his claim of throwing China out ‘in 15 minutes’ which is reminiscent of his grandfather’s blunder of an order to throw the Chinese off the Thagla Ridge.

The LAC standoff will see Chinese border guards and PLA and Indian Army and Indo-Tibetan Border Police battle it out in winter for survival. But even now India has left door to diplomacy open as part of its policy of engagement and containment. After November 15, India will not be able to pull back its troops from LAC as passes will have closed.

The PLA has no such problem. As India has bipartisan support in US, presidential election results on November 3, will not alter the foundation of the relationship though the pre-election rhetoric on China will moderate. Especially a Trump return, if it is gentle on Beijing, invoking his affection for ‘very, very, very good friend Xi’ could upset the apple cart of India’s perceived pressure points.