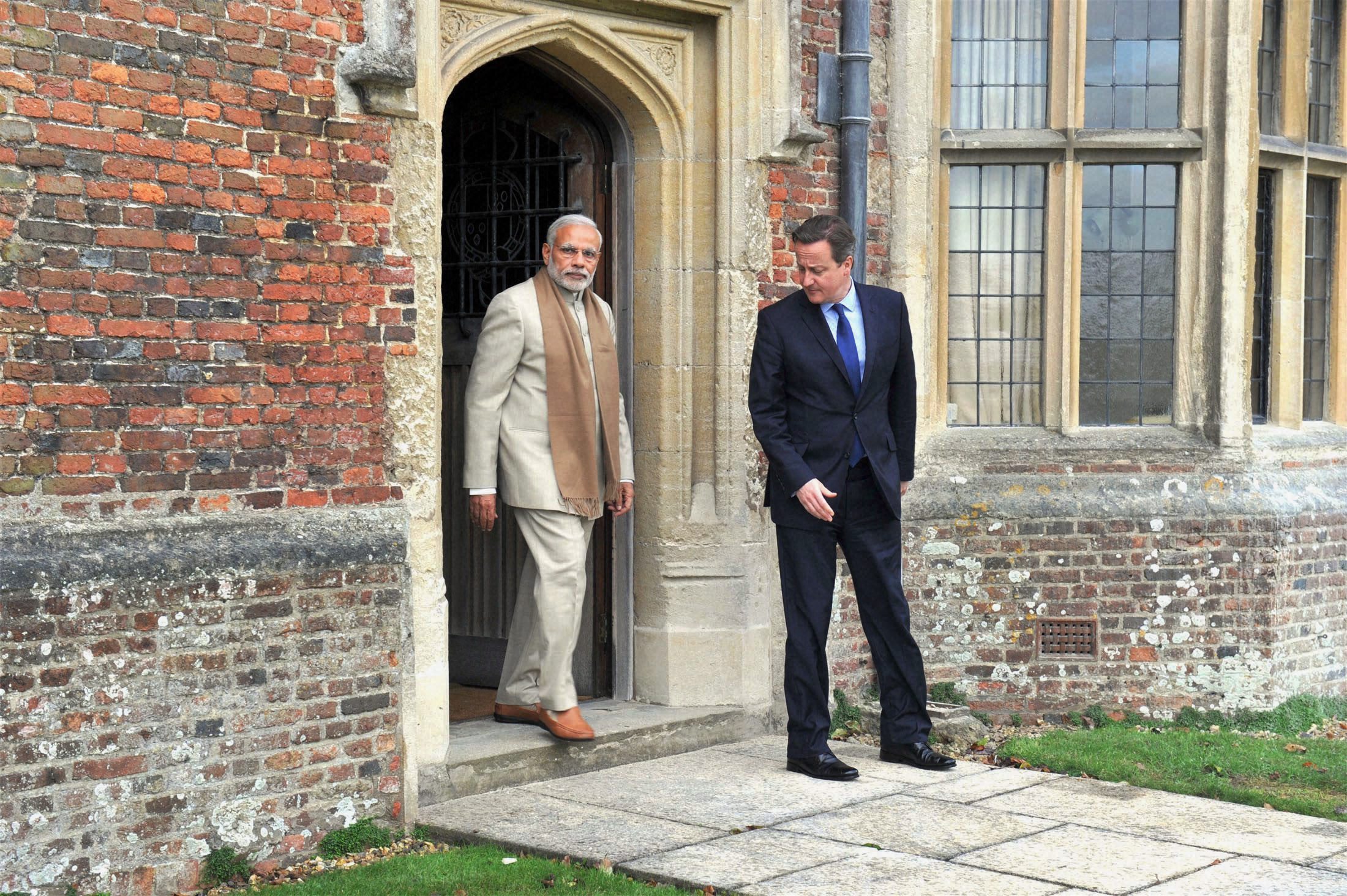 Two features stand out from Prime Minister Narendra Modi’s visit to the UK last week. British Prime Minister David Cameron spent two full days with him, signalling his personal commitment to boosting the bilateral relationship. This included a rare overnight stay at his country residence, Chequers and welcome remarks at the Wembley stadium where Modi addressed some 60,000 UK-based Indians. Both premiers also spoke of the tremendous potential of the bilateral relationship for mutual prosperity and international security, implicitly acknowledging that it needed to be transformed.

Although some in India’s strategic community perceive the UK simply as a relative ‘declining’ power with little relevance to the aspirations of a ‘rising’ India, this is short-sighted. The UK is the fifth largest economy in the world and a permanent member of the UN Security Council, with London as a major global financial centre. Equally important is Britain’s ability to wield considerable global influence through its enviable network of real strategic partnerships.

For Cameron, Modi’s visit was an opportunity to improve trade links and deepen engagement with the fastest growing major economy in the world, amidst political uncertainty over the UK’s own future in the European Union. For Modi, this visit was important to seek investment for infrastructure at home – the UK is the single largest G20 investor in India, bigger than the US – and engage with an estimated 1.5 million British Indians and 300,000 Non-Resident Indians, the largest Indian expatriate community outside the Persian Gulf.

Although there was some sharp criticism of Modi in the British media over a perceived rise in religious intolerance in India, alongside noisy protests outside 10 Downing Street and in Parliament Square (featuring a mix of Sikh, Kashmiri and, surprisingly, Nepali groups, the latter protesting India’s alleged interference in Nepal’s internal affairs), the British government rolled out the red carpet. The BJP’s defeat in the Bihar elections earlier in the week did not dampen the visit. Indeed, Modi responded to some of the media criticism through his Wembley address when he talked of India’s pluralistic society and multiculturalism, and reiterated that he had last visited the UK in 2003 as Chief Minister of Gujarat, the visit notably having taken place after the 2002 Gujarat riots.

While there was no single ‘potentially game-changing’ takeaway from the visit, significant economic and investment decisions took place. For the first time, an Indian government-backed rupee-denominated bond for the railways sector is to be issued in London; a 40-member India-UK CEO forum was revamped with top members including BAE Systems chairman Ian King and Reckitt Benckiser CEO Rakesh Kapoor, alongside Tata’s Cyrus Mistry and Bharti Enterprises Sunil Bharti Mittal; and new investments into India worth $11.2 billion (£7.2 billion) were announced (in comparison to Germany’s $2.3 billion and France’s $2.1 billion investments).

Yet, until the bilateral political and security relationship is strengthened, and a real ‘strategic partnership’ established, the UK’s relevance to India will not be bolstered.

For the past 11 years, both countries have rhetorically stressed their ‘comprehensive strategic partnership’, which was upgraded to an ‘enhanced partnership’ after Cameron’s first visit to India as prime minister in July 2010. Despite a September 2004 joint declaration seeking ‘annual summit meetings’, only four British prime ministerial visits to India have taken place since then, including three by Cameron (in July 2010, February 2013 and November 2013, en route to the Commonwealth summit in Colombo). Even these were not reciprocated by India, exept in 2006. Considering that Prime Minister Manmohan Singh’s 2009 trip to the UK was for a G20 summit, Modi’s visit to the UK is the first bilateral visit in nearly a decade.

This may well have partly been due to differing views between India and the UK on South Asian security issues. India’s primary concern remains another Mumbai-type terror attack emanating from Pakistan-based militants. Although both the UK and India agree that all terrorist networks must be defeated, the Indian security establishment believes the UK can do far more to influence Pakistan’s military and intelligence agencies to rein in the anti-India militant groups based in Pakistan. This is not a view shared by the UK, which feels it has effectively cooperated to help prevent terror attacks on India.

While both also support an Afghan-led peace and reconciliation process, India and the UK differ over Pakistan’s role and influence in such an effort – with India concerned that this could lead to a decline in its own influence in Afghanistan. Indian security officials also point to the rise of Khalistani extremism in the UK as a source of concern for bilateral ties.

Significantly, key progress was made during Modi’s visit on bilateral security cooperation. In relation to counter-terrorism, the joint statement for the first time named Pakistan-based militant groups the Lashkar-e-Tayyaba (LeT), responsible for the November 2008 Mumbai terror attacks, and the Haqqani network, behind the July 2008 attacks on the Indian embassy in Kabul, and sought to disrupt their financial and tactical support. Both also called for Pakistan to bring the perpetrators of the Mumbai terror attack to justice. They also agreed to formalise their annual senior official dialogue on South Asia and develop their annual joint working group on counter terrorism. Oddly though, there was no reference to the Jaish-e-Mohammad (JeM), responsible for the 2001 attack on the Indian parliament, or the Dawood company, both of which had been mentioned in an India-US joint statement in September 2015. On Afghanistan, Cameron significantly stated that the UK would try to ensure that Afghanistan “was run by a government with the power to keep terrorist groups out of that country”.

Both countries have usefully been collaborating on cyber security since their first cyber dialogue three years ago. Since then, India has developed a formal cyber security framework and recently appointed a cyber security chief, whilst evolving its policy on international cyber governance issues to seek greater cooperation with the West. On this visit, both sides agreed to establish a Cyber Security Training Centre of Excellence to train a million India cyber‑security professionals, and the UK offered assistance to set up a new Indian Cyber Crime Coordination Centre.

Thirdly, both sides signed a much-delayed civil nuclear agreement. Although the text has not yet been released, it is believed to be a standard inter-governmental agreement similar to those India has already signed with France, Australia and Canada. This includes exchange of best practices especially in areas like decommissioning where the UK has superior technologies. Advantage UK also lies in the potential for industrial cooperation as well as collaboration on research & development. The UK has also agreed to work towards India’s entry into all export control regimes, and continues to support India’s bid for a permanent seat in an expanded UN Security Council.

On defence cooperation, the two sides agreed to hold annual strategic dialogues between their defence ministers and between the joint/integrated and single service military chiefs. Yet, the much speculated deal for the procurement of an additional batch of 20 Hawk trainer aircraft did not take place. There could also be useful collaboration on the development of a combat Hawk to be built in India, to boost rapidly depleting aircraft numbers, as well as being exported from India. Further defence cooperation also seems possible on artillery systems, and on aircraft-carrier technologies.

Finally, an important new dimension on maritime security was added. With the UK establishing its first permanent military base in Bahrain in 43 years, the Modi government viewing the Indian Ocean as part of its ‘near and extended neighbourhood’, and 7 million Indians resident in the Gulf, the UK and India have agreed to work together to strengthen their naval cooperation in the Indian Ocean and exchange information to enhance Maritime Domain Awareness. Maritime affairs will now be discussed in the bilateral South Asia dialogue.

While there has been no ‘game changer’ during this visit, a multi-dimensional dialogue architecture for security cooperation has significantly been put in place. In addition to biennial Prime Ministerial summits, new NSA-level talks will take place along with defence ministers and service chiefs meetings, as well as regular senior official meetings.

But, the key will be implementation. No time can be lost. Bilateral India–UK relations do not exist in a vacuum. While the UK may consider it is working sufficiently with India, other countries, such as the U.S, France, Germany, Japan, Australia and Russia, are seeking to do even more with India. If the UK is to return as one of India’s top five strategic partners, implementation of security cooperation remains key.