What Ukraine-Russia Tensions Mean for the US's Indo-Pacific Strategy

The Biden administration's Indo-Pacific strategy was announced days before the conflict between Ukraine and Russia took a turn for the worse, necessitating that the US turns its focus sharply on Russia and Europe once again. 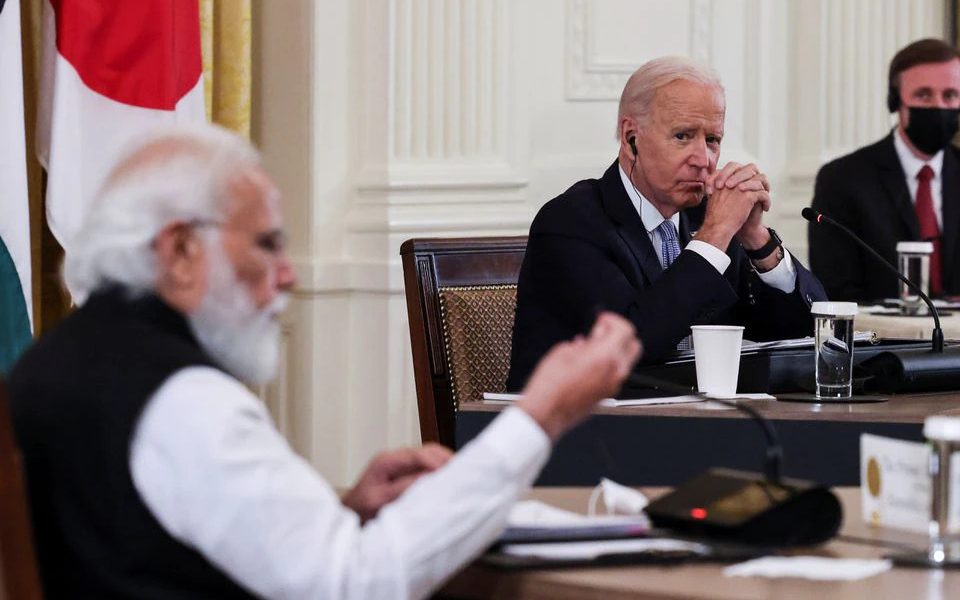 US President Joe Biden listens as India's Prime Minister Narendra Modi speaks during a 'Quad nations' meeting at the Leaders' Summit of the Quadrilateral Framework held in the East Room at the White House in Washington, U.S., September 24, 2021. Photo: Reuters/Evelyn Hockstein.

The geopolitical gods seem to be conspiring against the United States’s efforts to reshape its global strategy by focusing on the Asia-Pacific region. The Biden administration came out with its new Indo-Pacific strategy on February 12, just as things were going south in Ukraine, compelling the US to focus sharply on Russia and Europe once again.

Just how things will work in Europe is not clear, but the Ukraine toothpaste cannot be easily shoved back into the tube. In other words, we are in for a period of extended tension between an insecure Eastern Europe, backed by the US-led NATO, and an insecure Russia.

The new US Indo-Pacific Strategy (USIPS) document has pointed out that the Biden administration’s approach is a part of the continuum that originated in the “pivot” or “rebalance to Asia” strategy of the Obama administration. That policy ran aground on the shoals of West Asian geopolitics. That the policy is aimed at containing or constraining the rise of China is obvious, but it is mostly left unsaid in public documents and statements.

In 2010, erstwhile secretary of state Hilary Clinton’s address to the Association of Southeast Asian Nations (ASEAN) Regional Forum in Hanoi had affirmed American interest in the freedom of navigation, opposition to coercion and its support for negotiated settlements in the region. This was followed by her article on ‘America’s Pacific Century’ in Foreign Policy magazine in 2011 where she spoke of the pivot of American foreign policy to Asia.

But that was the year the Syrian and Libyan civil wars broke out and Vladimir Putin shrewdly exploited the former to insert Russia back into global politics. The American withdrawal from Afghanistan and Iraq, too, did not work as expected with the rise of the Islamic State.

So, it was left to the Trump administration to put its own distinct stamp on US Indo-Pacific policy. On one hand, the administration underscored its seriousness by changing the name of its ‘Pacific Command’ to ‘Indo-Pacific Command’; on the other, its 2017 National Security Strategy clearly laid out a new policy of confronting China, instead of engaging with it. It also provided the necessary push to revive the idea of the Quadrilateral Grouping (Quad) that had gone dormant in 2008, within a year of its founding.

To this end, it sought to build ties with “a strong India, in cooperation with like minded countries, [that] would act as a counterbalance to China”. The US knows that no other country in the Quad or the Indo-Pacific can play the kind of role India can in anchoring any Indo-Pacific strategy. In line with this, the Trump document declared that it was in the US’s  interest to “accelerate India’s rise and capacity to serve as a net provider of security and major defence partner.” It also made it clear that it sought to “create a quadrilateral security framework with India, Japan, Australia and the United States as principal hubs.”

Biden’s new Indo-Pacific strategy is not too different from Trump’s. This is evident from its focus on China, which is “combining its economic, diplomatic, military and technological might” to shape a sphere of influence in the Indo-Pacific “to become the world’s most influential power”.

The USIPS says that while China’s “coercion and aggression” span the globe, it “is most acute in the Indo-Pacific” where it has ranged from the economic coercion of Australia, the conflict along the Line of Actual Control (LAC) with India, pressure on Taiwan and the “bullying of neighbours in the East and South China Seas.”

It notes that the world needed collective efforts to ensure that Beijing is not able to shape the rules and norms of the world to its own advantage. However, the US goal here was “not to change China, but to shape the strategic environment in which it operates.”

The USIPS has a five point agenda:

1) To advance the notion  of a free and open Indo-Pacific (FOIP) by providing support to open societies and governments that “can make independent political choices, free from coercion.”

2) To strengthen existing alliances and partnerships like the Quad which seeks to enhance cooperation in global health, climate change, critical and emerging technology, infrastructure, cyber, education and clear energy.

3) To propose an “innovative new framework” to transform regional economies. It notes that even today, FDI from the US in ASEAN countries is greater than the grouping’s next three investment partners combined.

4) To promote traditional security through “integrated deterrence”; which means that the US will tightly network the warfighting abilities of its allies and partners. It will use innovation to ensure that it can operate in the evolving space, cyber space and critical and emerging technology domains.

5) To develop “regional resilience to 21st-century transnational threats”. This includes the work towards the climate crisis, helping end the COVID-19 pandemic and strengthening health systems to deal with future shocks.

To deal with this agenda, the USIPS has proposed a 10-point action plan which will be rolled-out in the next two years. Among the prominent items here is the importance of supporting India’s “continued rise and regional leadership”.

As part of this, the US would seek to work through regional groupings (presumably, the South Asian Association for Regional Cooperation; or SAARC) to promote stability in South Asia, and collaborate in new areas like health, space, cyber space and deepen economic and technology cooperation. It says that the US views India as a “like-minded partner”, a “leader in South Asia and the Indian Ocean” and “a driving force of the Quad and other regional fora.”

Watch: India-Russia Relations in the Age of Sino-US Security Competition

In addition, the US plans to pour additional resources into countries in the region, including ASEAN members; reinforce military deterrence through military means, which include the new Australia UK US (AUKUS) alliance; strengthen the Quad as the premier regional grouping on issues like vaccines, critical and emerging technologies, supply chain cooperation; and so on.

The one problem with the Trump Indo-Pacific strategy was that the president himself undercut it by taking the US out of the Trans-Pacific Partnership (TPP) in 2017. The TPP was an ambitious trade agreement aimed at reducing the dependence of its signatories on Chinese trade and drawing them closer to the United States.

The Trump administration’s alternative approach was to propose a Blue Dot Network (BDN) to certify international standards for infrastructure projects to corner China. It sought to encourage public-private partnerships for infrastructure development, enhance connectivity and contribute to a cleaner environment to provide an alternative to China’s Belt and Road Initiative (BRI).

The BDN financing project was taken up through the Group of Seven (G-7) which, in June 2021, announced a global infrastructure initiative which the Biden administration has linked to its ‘Build Back Better World (B3W)’ programme. The Americans said that this was  a “values-driven, high-standard and transparent” initiative which seeks to catalyse private capital to invest in global infrastructure and focus on climate, health, digital technology, gender equity and equality.

The fate of the Biden administration’s Indo-Pacific Strategy is now hostage to two developments; First, the uncertainty and dangers that have appeared in Europe on account of the Ukraine-Russia conflict; and second, the state of the Biden presidency itself which will become clearer by the end of this year, when the off-year elections take place in the US.

The US president may have no problem in delivering on the military aspects of his programme, but whether he can find the money to promote the B3W is a moot question, considering that he failed to persuade the US Congress to come up with money he said was needed for the country’s domestic infrastructure development plan.