To raise its standing in the Shanghai Cooperation Organisation, India should rope in Uzbekistan and Kazakhstan in its effort to project Chabahar as a gateway to Eurasia. 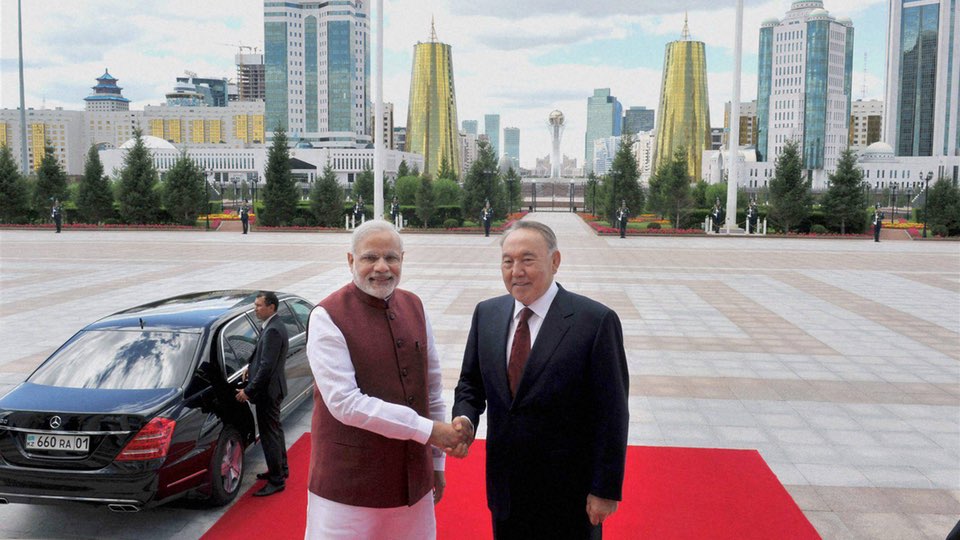 India and Pakistan are to join as full members of the Shanghai Cooperation Organisation (SCO) at the Astana summit on June 8-9, 2017. Last year, both countries signed the 30-odd obligatory papers necessary to join the pan-Eurasian grouping.

Chinese officials have already warned the two new entrants to “strictly follow” the spirit of “good-neighbourliness” prescribed in Article 1 of SCO’s charter. But the key agenda item in Astana is going to be the twin admission of India and Pakistan, and this will be peddled as the SCO’s key achievement – something even Washington has been unable to accomplish. The addition of another 1.5 billion people would provide fresh excitement, for the SCO will now represent the voice of three billion people – half the world’s population.

The SCO’s charter prohibits the raising of bilateral issues. But behind the scenes, Moscow and Beijing seem to be craving to beget a closer India-Pakistan entente through the auspices of the SCO. Surely, they are also mindful of the negative impact a failure in this regard may have for the grouping.

No explicit signs are in the offing, but it was noticeable that when Russian President Vladimir Putin and Pakistani Prime Minister Nawaz Sharif had an informal meeting in Beijing recently, Chinese President Xi Jinping also joined at the end. Putin and Xi supposedly offered to play a mediatory role between Sharif and Modi at Astana. Sharif is said to have conveyed in advance that a meeting would be useful only “if India assures cessation of hostilities against the innocent people of Kashmir”.

In practical terms, the scenario looks hazy for India. Let us not forget that the SCO was the key motivator behind China’s BRI concept and Beijing has now pledged additional billions for the initiative in Eurasia. That is why, with the exception of Tajikistan, the heads of all SCO members participated in the Beijing Summit. With Pakistan also in the BRI, the SCO is fully aligned with China’s vision, which may be showcased at the upcoming summit.

So, how will India find itself in this flock of ‘wild swan geese’ flying in the Eurasian space? To be sure, multiple conflicting interests would intersect at the SCO forum, ranging from regional and global issues to combating terrorism. India’s positions may sometimes be at odds with those of other countries, which have been going along with the Chinese viewpoints.

No change is expected in Beijing’s stance on preventing Masood Azhar’s listing in the UN sanctions list. In fact, the ‘Shanghai spirit’ or its consensus decision based-making approach could further complicate India’s NSG membership case.

Even Russia has deviated from its traditional understanding with India on Afghanistan – opting for a solution through closer alignment with Pakistan. Of course, Beijing has been hedging its own bets in Afghanistan by formulating a sub-regional security grouping consisting of Afghanistan, Pakistan and Tajikistan.

India has chosen to stay out of BRI for sovereignty reasons. But China is not alone; Kyrgyzstan and Kazakhstan had long crossed India’s sovereignty red lines when they signed the Quadrilateral Traffic in Transit Agreement (QTTA) with Pakistan in 1995 to use the Karakoram Highway passing through Gilgit-Baltistan as a transit corridor.

It is a different matter that QTTA has not been effective for facilitating traffic, but it did nullify India’s objection much before even BRI came into being. Tajikistan has recently joined the QTTA and Kazakhstan has shown interest in joining CPEC. Tapping the potentials of CPEC/QTTA will form an agenda as also a useful instrument for raising Islamabad’s standing in SCO.

But if the recent UN report is to be taken seriously, CPEC would become more a driver of instability than facilitating economic integration. And, if CPEC strains India’s ties with Pakistan, the QTTA too will potentially dent India’s ties with other SCO states.

As for the potential benefits, India could gain from SCO’s Regional Anti-Terrorist Structure – manned by 30 professionals analysing key intelligence inputs on the movements of terror outfits, drug-trafficking, cyber security threats and public information in the region that we in India know little about. Likewise, participation in SCO’s counter-terror exercises and military drills could be beneficial to the Indian armed forces. Profiting in terms of energy security would be critical, but the idea of a SCO “Energy Club” will gain full meaning only if Iran joins the grouping eventually.

The practical implications of SCO are unlikely to be dramatic. Except for political rhetoric, member states will continue to function through bilateral as well as other multilateral engagements, though China could seek inclusion of bilateral contents in the SCO’s ambit.

Pakistan has been waiting in the wings to link up with Eurasia to seek multiple opportunities, and it could put a spanner in India’s goals. Knowing the quirky nature of Indo-Pak relations, many fear that the spotlight would get shifted away from Central Asia thus making it harder to advance regional cooperation.

But, more worrying for some, especially given its track record in SAARC and Economic Cooperation Organization, is that Pakistan’s involvement would prove detrimental for SCO’s growth if not a “time bomb” waiting to explode.

At the same time, SCO might provide a rare opportunity for the militaries of Pakistan and India to share several multilateral tables – antiterrorism structure, military exercises – under the SCO framework, which in many ways might change the regional climate and have a positive impact on Indo-Pak relations.

For now, India would do well to enter into the Eurasia integration path by seeking an early conclusion of a Free Trade Agreement with the Eurasian Economic Union in order to enable unhindered flow of goods, raw-materials, capital and technology.

The commissioning of the International North South Transport Corridor along with the proposed Chabahar project would enable Indian goods to gain better access to the untapped markets of the entire Eurasian region including Russia’s Far East.

To raise its standing in the SCO in a more meaningful way, India should rope in one or more SCO countries, preferably Uzbekistan and Kazakhstan, in its effort to project Chabahar as India’s gateway to Eurasia. In the meantime, it should seek to benefit from maintaining a regional presence, tracking regional trends in security, energy, trade, connectivity and cultural interests. India should use the SCO atmosphere for building better convergences with China and Russia as well as to minimise the intensity of China-Pakistan alignment which actually undercuts India’s direct access to Eurasia.

If nothing else, the limited immediate benefits of joining SCO will be more than compensated for by improved diplomatic access to Central Asia.

P. Stobdan served as ambassador in Central Asia and is currently a Senior Fellow at IDSA, New Delhi. This article was originally published by the Institute for Defence Studies and Analyses.