India’s former Vice-President and a former Ambassador to Afghanistan suggested that it was a mistake for the Indian government to shut the embassy in Afghanistan. 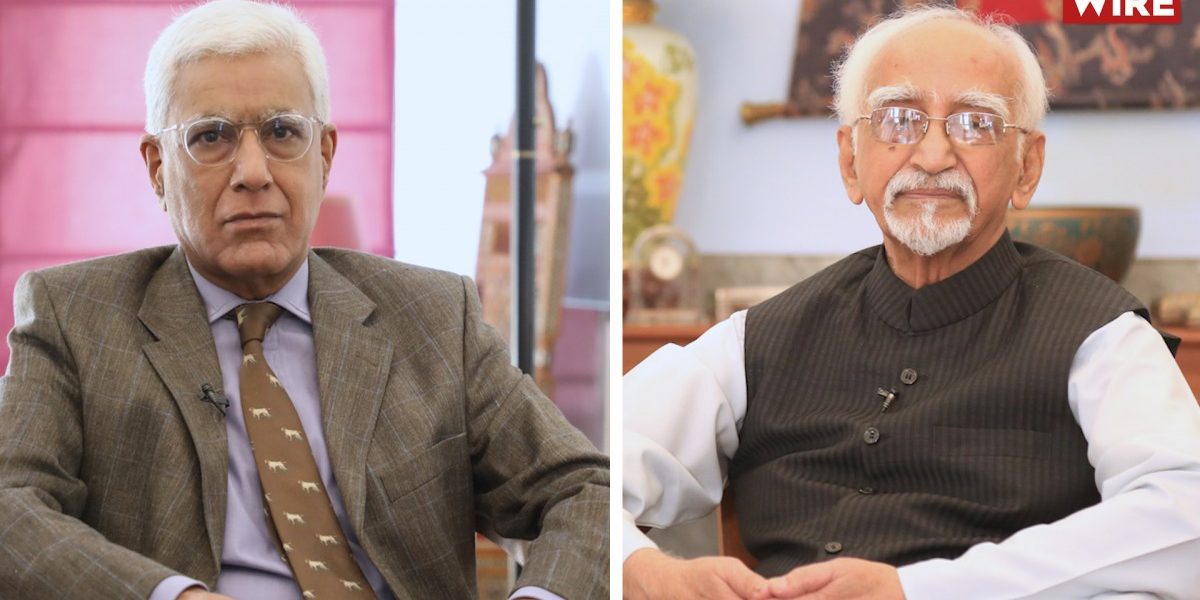 India’s former Vice-President and a former Ambassador to Afghanistan has clearly suggested that it was a mistake for the Indian government to shut the embassy in Afghanistan in August – although he doesn’t use that precise word – unless, of course, there was a clear warning of imminent danger.

However, Ansari adds, such a warning has not been shared with the public and it does, therefore, seem as if a wrong or questionable judgement call was made when the embassy was shut.

Ansari has also said that the government should immediately re-open the embassy and that this would be in the best interest of India as well as Afghanistan. All of this was said in the last five minutes of the interview.


In a 25-minute interview to Karan Thapar for The Wire, Ansari spoke at length about his proposal that neutrality or neutralism would be the best policy for Afghanistan. He pointed out that this was Afghan policy from the time of King Nadir Shah in 1931 right up till the take-over by the Mujahideen in 1990-91. During the World War II, the 1965 and 1971 India-Pakistan wars and the Kargil war, Afghanistan attempted to maintain a posture of neutrality.

Ansari pointed out this shows neutrality has served Afghanistan well in the recent past.

The reason Ansari advocates neutrality is because it would be the best way of tackling the concerns of the countries immediately surrounding Afghanistan and also the best way of reassuring the wider world and, particularly the P5, that Afghanistan will not get involved or dragged into international politics as well as the politics of the region.

Ansari believes that this declaration of neutrality would facilitate international aid and assistance, which Afghanistan badly needs. He described the condition of the Afghan people as “dire”. The BBC has reported that perhaps 50% of the country is short of food and up to 2 million children are already suffering from severe malnutrition. The UN has said 1 million children could die this winter.

Ansari said neutrality could also, at a later stage, facilitate the international recognition that the Taliban crave, although that may not happen immediately.

The key stumbling block is whether neutrality could sort out the long standing Afghanistan-Pakistan dispute over the Durand Line. Ansari says the best course for the Taliban and Afghanistan is to accept the advice of a former Pakistani foreign secretary, Riaz Mohammad Khan, and treat the Durand Line as a functional border – even though they don’t accept it as a legal border – whilst Pakistan would continue to regard it both as the historical and legal border. This ‘compromise’ by the Taliban would be in Afghanistan’s best interests.

However, to be truly meaningful and effective, Ansari says there are certain “essential ingredients of neutralisation” that have to be fulfilled. These are, first, a constitutional declaration by Afghanistan, second, legally binding declarations by all its neighbours, third, a UN Security Council declaration refraining from any form of power politics in Afghanistan and, finally, a UN General Assembly resolution recognising Afghanistan as a neutral state.

Ansari accepts that neutrality would still leave unresolved the concerns the West has about Taliban treatment of women, Afghan minorities and it’s religious bigotry. Here, he cited the example of Arab countries which, 20-30 years ago, had similar internal problems which the West did not like but learnt to accept and live with. Over time, many of those Arab countries have changed or, at least, ameliorated their attitudes.

The same policy should be, he said, accorded to Afghanistan.