Wang Yi said India should put the border issue at an “appropriate place” in bilateral relations, even as both countries agreed to expand cooperation at multilateral bodies. 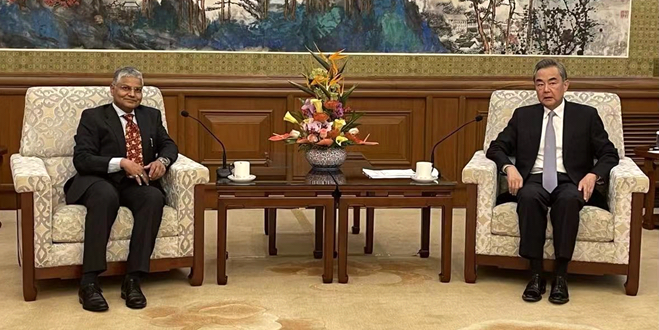 New Delhi: As part of a proposed guideline for improving ties, China reiterated the need to put the border issue with India at an “appropriate place” in bilateral relations, even as both countries agreed to expand cooperation at multilateral bodies.

As per the Chinese press release, Wang Yi’s first principle was that both countries consider themselves partners and not rivals or threats to each other, as advocated by the leadership.

After that, he asserted the Chinese position that India should not put border friction at the centre of the relationship and allow the rest of the ties to go forward.

“Second, persevere in putting the boundary issue in an appropriate place in bilateral relations and seeking solutions through dialogue and consultation,” he said.

Since May 2020, the Indian and Chinese military has been in a stand-off at various points in eastern Ladakh, which has cost the lives of over 23 soldiers in hand-to-hand fights. After multiple rounds of diplomatic and military talks, both sides have disengaged from Galwan valley, Pangong Lake and Gogra, but differences persist over Depsang and Hot Springs.

India has previously insisted that the rest of the relationship cannot be normalised if the border stand-off continues. Meanwhile, the trade volume has continued to increase, and Chinese foreign minister Wang Yi visited Delhi in March after a gap of over two years.

The Indian embassy’s readout of the meeting stated that Ambassador Rawat “emphasised the criticality of maintenance of peace and tranquillity in the border areas for realising the full potential of this consensus”. The Indian press note mentioned that the Chinese foreign minister “said that the border issue is important and we should stay committed to peacefully addressing it through consultation and coordination”.

As per Wang Yi, the last principle was cooperation in multilateral bodies. “Fourth, persevere in expanding multilateral cooperation, joining hands to revitalise Oriental civilisations, coping with the complicated world together, and opening up a brighter future for mankind”.

Last week, Indian officials had informally criticised China for putting a ‘technical hold’ on the listing of a relative of Jamaat-ud-Daawa (JuD) chief Hafiz Saeed in the United Nations Security Council’s 1267 ISIL and al-Qaida Sanctions Committee.

“The two sides should bear in mind the overall interests of bilateral relations, help each other succeed instead of engaging in attrition, strengthen cooperation instead of guarding against each other, and enhance trust instead of being suspicious of each other,” noted the Chinese statement.

It also claimed that Rawat informed Wang that India would “firmly pursue an independent foreign policy” and was ready to work with China to “strengthen communication, properly handle differences, enhance mutual trust, and promote better development of bilateral cooperation”.

The Indian embassy said that Wang recalled India’s concerns about the return of Indian students to China and “hoped to see early progress on this”. There was also mention of the resumption of direct flights between the two countries at an early date.

As per the Indian statement, both sides agreed to make “make full use of the opportunities provided by multilateral meetings to continue their exchange of views including between the two Foreign Ministers”, indicating that there could be more meetings on the side-lines of global summits like Shanghai Cooperation Organisation.