J&K 'Was, Is and Shall Forever Remain an Integral Part of India': Vikas Swarup at UNHRC

Speaking at the 43rd session of the UN Human Rights Council, Swarup described Pakistan as the "epicentre of global terrorism". 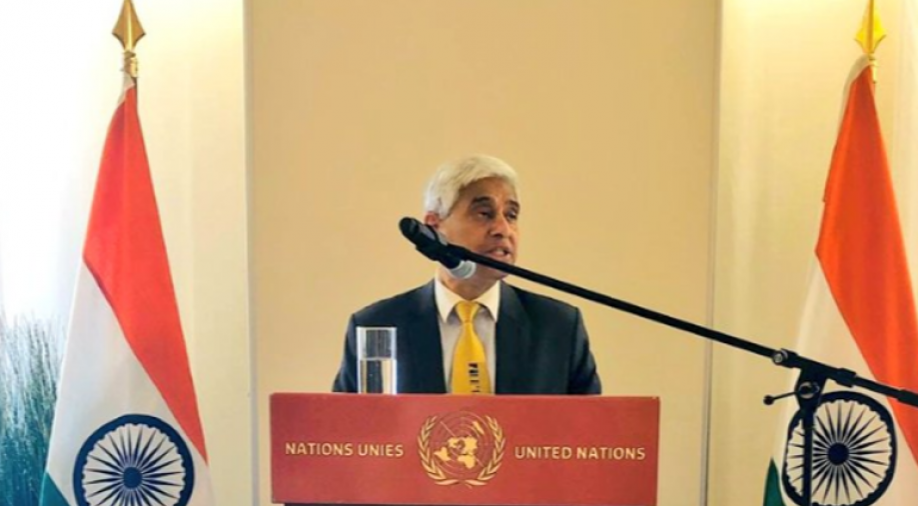 Geneva: Jammu and Kashmir “was, is and shall forever” remain an integral part of India, top Indian diplomat Vikas Swarup asserted at the UN Human Rights Council’s meeting here on Wednesday, a day after Pakistan sought the international community’s intervention on the Kashmir issue.

Speaking at the 43rd session of the UN Human Rights Council which is being held here in Switzerland from February 24 to March 20, Vikas Swarup, Secretary (West), the Ministry of External Affairs, described Pakistan as the “epicentre of global terrorism”.

He called for decisive action against those who direct, control, fund and shelter terrorists, in an obvious reference to Pakistan, which is accused by its neighbours of providing safe havens to terror groups.

“It is more than a little ironical that a nation that has become the world’s leading exporter of terror and violence seeks to lecture others about human rights” added Swarup.

“Jammu and Kashmir was, is and shall forever remain an integral part of India,” Swarup asserted a day after Pakistan’s Minister for Human Rights Shireen Mazari alleged that India continues to violate the human rights of the Kashmiri people and demanded the immediate repeal of all actions by India on August 5 last year.

India read down the special status of Jammu and Kashmir under Article 370 on August 5 and bifurcated it into two Union Territories.

Pakistan has been trying to internationalise the Kashmir issue but India has asserted that the abrogation of Article 370 was its “internal matter”. New Delhi has also asked Islamabad to accept the reality and stop its anti-India rhetoric.

Swarup said the transformative changes “wrought by our Parliament last August were meant to strengthen the integration of the State… It was intended to ensure the extension of all progressive legislations passed for the entire country to cover this region, and to resume the pace of socio-economic development in the Union Territory of Jammu and Kashmir.”

Despite Pakistan’s best efforts – over decades – to destabilise Jammu and Kashmir through externally-instigated terror and a campaign of canards and untruth, the situation on the ground is quite normal, he said.

“Most temporary restrictions – imposed solely to ensure safety of the people from Pakistani trained terrorist attacks – have already been removed, political processes have resumed, telecom facilities have been largely restored, developmental activities are being undertaken at a rapid pace and there is access for all to education and healthcare,” Swarup added.

He said schools, colleges and universities have resumed and regular examinations are being held. Hospitals, clinics and pharmacies are well-stocked and staffing is at full capacity.

“These have been achieved despite Pakistan’s frenetic attempts to promote both violence within our territory – with an 81% increase in infiltration attempts since last August – and disinformation outside. Yesterday’s speech was a good example of the latter,” Swarup said, referring to Pakistani minister’s speech.

Addressing the delegation from Pakistan, Swarup said India is a nation where democracy, including the right to protest, is vibrantly and noisily celebrated every day and where dignity of every human is protected by a robust Constitutional framework.

“It is Pakistan that would do well to look to its own house and introspect about the condition of its people, especially its minorities,” he added.

He said India is making every effort for full and effective enjoyment of all human rights by all its people.

On Pakistan’s warnings about the situation within India, Swarup invoked poet Robert Burns to say that “someone should give them the power to see themselves as others see them.”