US Clears Sale of Guardian Drones to India 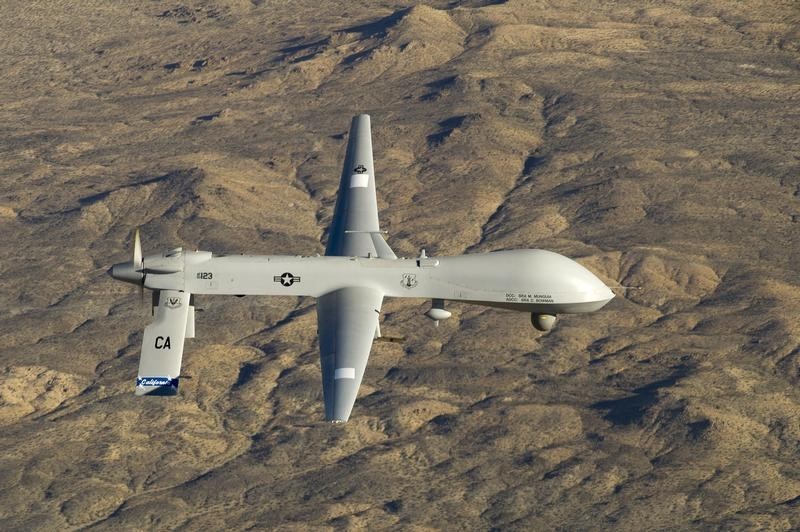 Washington: The US has cleared the sale of predator Guardian drones to India, as US President Donald Trump and Prime Minister Narendra Modi pledged to deepen their defence and security cooperation.

The US and India look forward to working together on advanced defence equipment and technology at a level commensurate with that of America’s closest allies and partners, said a joint statement issued after the India US Summit at the White House.

“President Trump and Prime Minister Modi pledged to deepen defence and security cooperation, building on the United States’ recognition of India as a Major Defence Partner. Reflecting the partnership, the US has offered for India’s consideration the sale of Sea Guardian Unmanned Aerial Systems, which would enhance India’s capabilities and promote shared security interests,” the joint statement said.

Resolving to expand their maritime security cooperation, they announced their intention to build on the implementation of their “White Shipping” data sharing arrangement, which enhances collaboration on the maritime domain awareness.

Trump welcomed Modi’s strong support for the US to join as an Observer in the Indian Ocean Naval Symposium.

Noting the importance of the upcoming MALABAR naval exercise (involving the US, Japan and India), the leaders determined to expand their engagements on shared maritime objectives and to explore new exercises.

Earlier in his remarks to the press, Modi said there is increasing possibilities for enhancing cooperation in order to protect “our strategic interests (that) will continue to determine the dimensions of our partnership”. He had also added that, “With regard to security-related challenges, our enhanced and growing defence in security cooperation is extremely important. We have spoken at length on this subject as well.

“The strengthening of India’s defence capabilities with the help of USA is something that we truly appreciate. We have also decided to enhance maritime security cooperation between the two nations… President Trump and I have also spoken about strengthening bilateral defence technology and our trade and manufacturing partnership, which we believe will be mutually beneficial to us. We also discussed international issues and our common strategic interests in this country,” the prime minister said.

Trump also reiterated the fact that the security partnership between the US and India is incredibly important.

“Our militaries are working every day to enhance cooperation between our military forces, and next month they will join together with the Japanese navy to take part in the largest maritime exercise ever conducted in the vast Indian Ocean, Trump said.

On June 22, media reports here said that ahead of Modi’s visit, the US has cleared the sale of 22 predator Guardian drones, a force multiplier that will boost the Indian Navy’s intelligence, surveillance and reconnaissance capabilities.

The deal was estimated to be worth two to three billion dollars, the reports said, adding that the decision was communicated to the Indian government and the manufacturer by the State Department.

“On defence cooperation, there was a sense that combination of convergence and regular exchanges on policy, the fact that today we are major partners in exercises with each other, all these underline the fact that India and the US recognise each other key defence partners,” Foreign Secretary S Jaishankar told reporters at a news conference.

“This was really an occasion for us to send a message that India was a reliable dependable partner, that was fully reciprocated on the American side,” he said.

In a late night statement, the White House said completion of these sales would increase bilateral defence trade to nearly USD 19 billion, supporting thousands of US jobs. “If selected, United State offer to sell F-16 and F/A-18 fighter aircraft to India would represent the most significant defence cooperation between the US and India to date,” the White House said.

According to the White House, the United States remains a reliable provider of advanced defence articles in support of India’s military modernisation efforts.

The US-India Defence Technology and Trade Initiative (DTTI) remains the premier forum for deepening collaboration on defence co-development and co-production, it said.

The seven DTTI Joint Working Groups continue to discuss a range of technologies and platforms for potential co- development, including India’s participation in the Future Vertical Lift program, it added. The DTTI representatives met most recently in April.

The annual MALABAR naval exercise, occurring in July in the Indian Ocean, will be the most complex to date, including participants from the US Navy, Indian Navy, and the Japan Maritime Self-Defence Force. US and India also participate in the VAJRA PRAHAR Special Forces exercise, the RED FLAG air force exercise, and YUDH ABHYAS army exercise, it added.

According to General Atomics, the Predator Guardian UAV, a variant of the Predator B, can be used for wide-area, long- endurance maritime intelligence, surveillance and reconnaissance missions, it can stay in the air for up to 27 hours and can fly at maximum altitude of 50,000 feet.

The Indian Navy made the request for this intelligence, surveillance and reconnaissance (ISR) platform last year. The Guardian has cutting edge technologies that do not exist in the current navy arsenal. This maritime capability will bolster the capabilities of the Indian Navy which has procured other advance technologies including Boeing P-8 aircraft recently.