The recently-concluded discussions on the proposed TRIPS Agreement waiver at the WTO illustrates not only the limits of India's negotiating strategies, but also a critical lack of consistent diplomatic leadership during a difficult period. 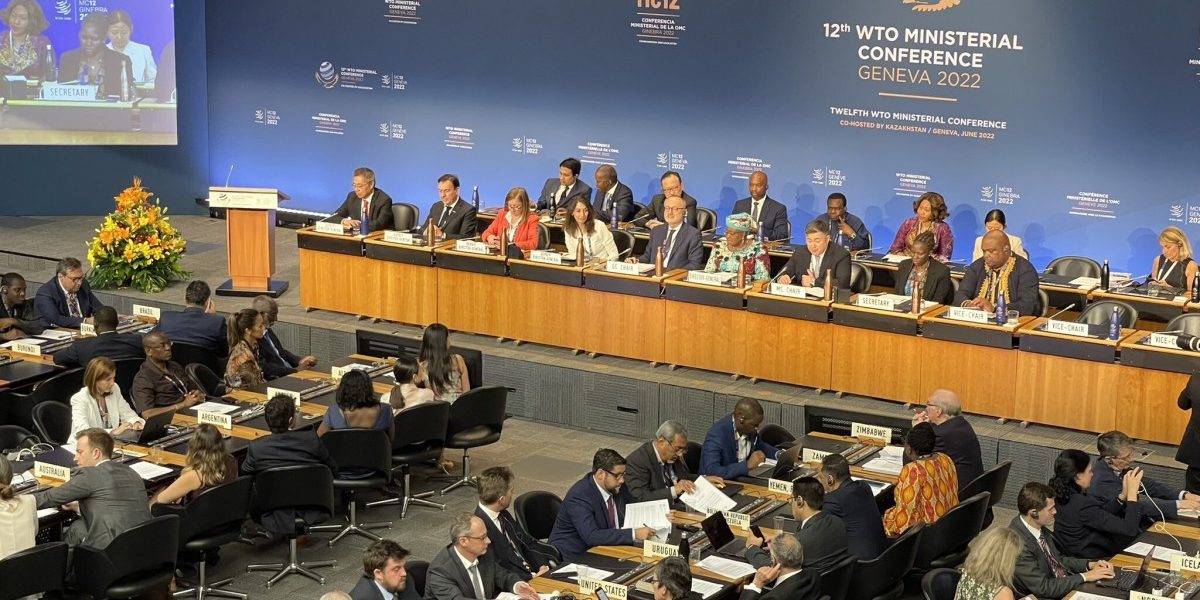 Heads of delegations at the 12th WTO Ministerial Conference, where the TRIPS proposal was accepted. Photo: Twitter/wto

India had a golden opportunity to lead the developing world in the worst public health crisis in 100 years. It could have strengthened its reputation of being the pharmacy of the developing world. Instead, it has walked away from this role and has focused on short-term gains at home, critics believe.

On the international stage, it will surely leave a void that may be difficult to reclaim. Geopolitics moves swiftly and India could be left behind.

The recently-concluded discussions on a proposed waiver of some of the provisions of the World Trade Organisation (WTO) TRIPS Agreement is a story that illustrates not only the limits of the country’s negotiating strategies, but also a critical lack of consistent diplomatic leadership during a difficult period. This will have deep repercussions on how the world sees India, and in fact, on the country’s overall ambition in health diplomacy, if not the larger foreign policy.

Indian government propaganda may lead one to believe that India has made great strides at the WTO ministerial. But looking beyond the manufactured headlines, it is clear how much India actually lost in Geneva last week. This analysis specifically looks at the TRIPS Waiver discussions, since India was a key flagbearer of this negotiation for nearly two years.

In October 2020, South Africa and India brought an expansive, ambitious and a bold proposal to the WTO, with the objective of temporarily waiving a limited set of provisions protecting intellectual property – as enshrined in the TRIPS Agreement – in order to swiftly respond to the COVID-19 pandemic.

As we reported previously, these negotiations took a tortuous path over 20 months, culminating in a much-compromised solution which was adopted by WTO members last week in Geneva at the 12th Ministerial Conference.

So path-breaking was this proposal in 2020 that it spawned a global movement to push for a legal mechanism to break the stranglehold of patent monopolies. In the end, the phenomenal movement that this initiative generated, failed.

This was on the back of sustained resistance from developed countries, compromises made by lead sponsors, among other factors. In the months and years ahead, many will pour over these landmark negotiations that held great promise on moving the needle on the access to medicines.

To be sure, despite its pivotal role in bringing the proposal to the WTO, India’s actions will not escape scrutiny.

Also read: Have India And South Africa, Lead Sponsors Of The TRIPS Waiver Proposal, Reconciled To A Weak Text?

Waiver negotiations and India at the WTO Ministerial

While many supporters of the original waiver proposal are hesitant to lay the blame at the doors of India and South Africa, at the very least, examination of and reflection on the roles of these actors is legitimate.

We string together public statements made by Indian authorities during the ministerial and after that paint a picture of sheer diplomatic confusion on where India stands on the role of intellectual property in the access to medicines.

Hours after the ministerial resumed, India sent a media briefing that said, on the TRIPS Waiver discussions: “The department of commerce has organised a few consultation meetings with the Ministries concerned and the industry stakeholders on this subject. The Indian pharmaceutical industry has acknowledged it, though the draft text that emerged does not reflect India’s envisaged outcome; still, it is a significant step to pressure the international pharma community to provide voluntary licenses for COVID Vaccines.”

This was baffling to say the least. If the ultimate goal of the Indian government was to encourage and preserve voluntary licensing arrangements from the international pharma industry, why go through nearly two years of diplomatic consultations on waiving IP rights, precisely because voluntary arrangements have failed to adequately address the needs during this pandemic?

This kind of messaging was poorly conceived and had the worst timing possible; at the cusp of these sensitive negotiations. And yet, for astute watchers, this was not new. Some of the worst fears on India’s flip-flop communication on this issue had come true.

The discussions on waiving a single provision of the TRIPS agreement reportedly went through eight rounds of “green room” negotiations, that ended in a nail-biting finish in the small hours of June 17, at the close of the ministerial conference.

What was ultimately agreed was nowhere close to the TRIPS Waiver proposal submitted in 2020. In fact, Indian negotiators, like other diplomats representing the sponsors of the proposal, refrained from calling such an outcome a waiver of any sort, in the lead up to the ministerial discussions, acknowledging how far the proposed solution was from the original waiver proposal.

And yet, much to the embarrassment of the supporters of this proposal, Union minister of trade and commerce, Piyush Goyal, tweeted hours after the ministerial: “Our TRIPS waiver proposal is accepted at WTO opening the window for production and exports of patented vaccines.”

Shot in the arm for India’s Vaccine Maitri.

Our TRIPS proposal is accepted at @WTO opening the window for production & exports of patented vaccines.

This was, of course, factually incorrect, because the WTO membership did not even negotiate the text of India and South Africa’s proposal during the previous months. What was discussed, negotiated and agreed on, was a text proposed by WTO director-general Ngozi Okonjo-Iweala.

In an analysis following the ministerial, I wrote in Geneva Health Files, “It is also politically expeditious, for both, the WTO and developed countries to refer to this as the waiver text. While semantics matter, in the light and sound that the ministerial has generated, this nuance has already been lost.”

In fact, referring to this ministerial outcome as a waiver is also politically useful for countries like India. Soon after, Goyal followed up with a press conference touting the India’s role in the negotiations. Other southern diplomats told us they watched the proceedings with disbelief.

Also read: COVID-19 Will Recast Global Health as a Security Issue. India Must Gear up for Health Diplomacy.

Most people who are paying attention, will know that the use of optics and images to serve a domestic constituency is straight out of the government’s playbook – never mind the facts.

Here is another example that shows how closed this approach has been.

The Indian delegation spoke only to Indian journalists, even as foreign reporters were given the cold shoulder in Geneva during the ministerial. Indian officials took umbrage at the headlines in many Western media outlets that portrayed India as a blocker in the WTO negotiations.

In fact, many non-Indian reporters were keen on genuinely understanding the Indian position on the various disciplines at the ministerial. But many reporters, including this one, were kept out of press briefings. Finally, in what appeared like a staged scrum, a day before the ministerial concluded, Goyal held court, much to the amusement of other trade ministers present. 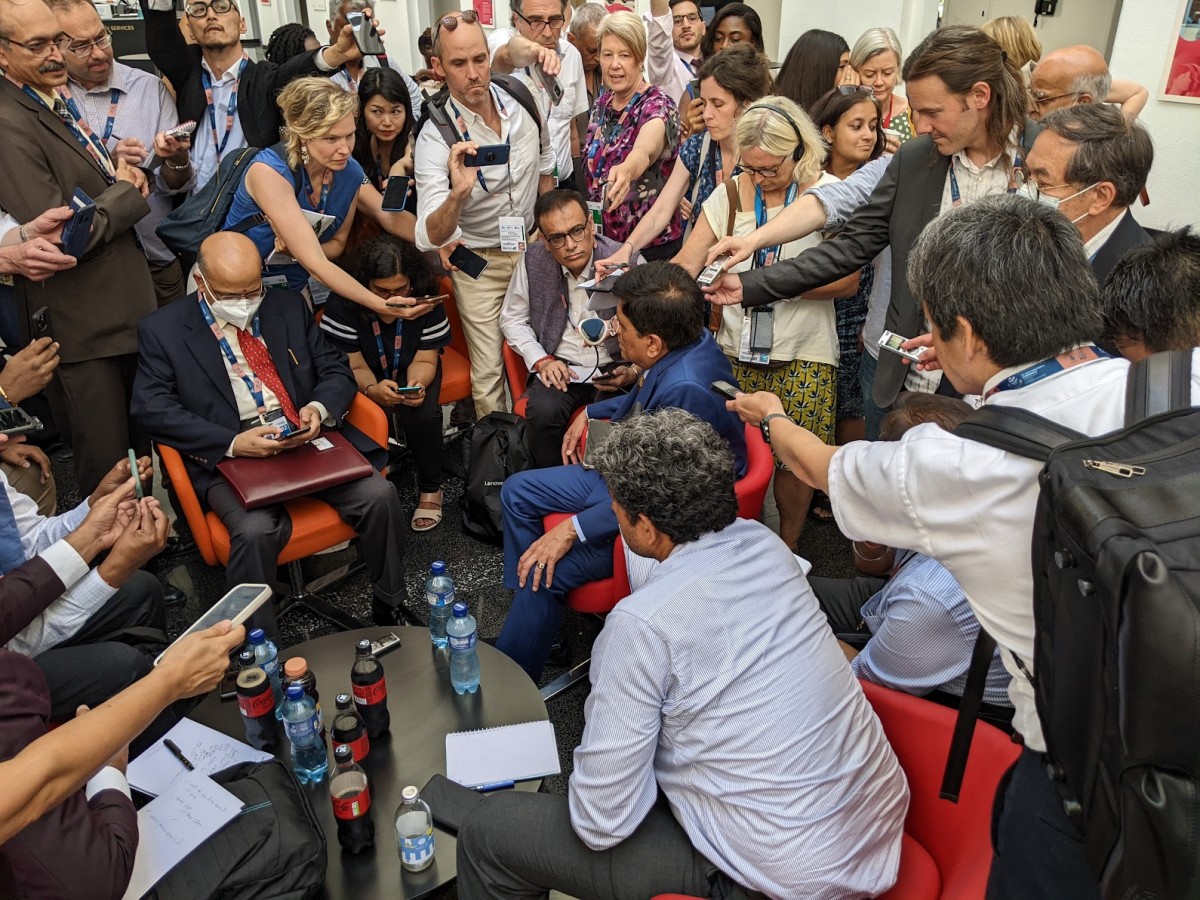 The use of a very public international event, such as the WTO ministerial, to score at home not only shows desperation, but also a sheer lack of imagination. Unfortunately, apart from being perceived as having no serious intent on pushing back on these negotiations until the very end, this could have deep consequences for Indian diplomacy, and worse, for the coalition of developing countries in Geneva.

Recall that more than 60 other WTO members became co-sponsors to the TRIPS Waiver proposal. India and South Africa negotiated on behalf of nearly 100 other countries who supported this proposal when they entered into bilateral consultations with the US and the European Union (EU) during the previous months.

To be sure, Goyal made strong comments during the ministerial on the question of the waiver, but these statements paled in comparison to what followed later.

Hours after the conclusion of the Ministerial, Goyal and his delegation flew down to Brussels to relaunch the EU-India Free Trade Agreement (FTA). This did not sit well, with those closely watching India’s actions at the WTO.

Watch: ‘Without a Full Trade Partnership, You Don’t Have the Ballast for a Strategic Partnership’

What this says about the challenges faced by Indian diplomacy

India’s role in the TRIPS Waiver saga actually shows that Indian diplomats lack sustained interest and support from the New Delhi, many observers in Geneva believe. Surely there will be dissection of these negotiations. And, as we reported earlier, some point to the change of guard at the commerce ministry that directly interfered with India’s position in these negotiations over the past few months.

Sources familiar with these developments say that Indian diplomats in Geneva do not get enough traction from their nodal ministry in Delhi, making it very difficult for negotiators to take positions without the support of their bosses.

“At best, officers apprise ministries on deliberations in Geneva. But often, they do not hear back,” a source said.

This will have implications on other on-going negotiations in Geneva. The dynamics at the WTO suggest the limitations on how much India can decisively shape the negotiations on a new instrument for pandemic preparedness and response, currently being discussed at WHO.

Many old-timers in Geneva recall the days, ten years ago, when Indian diplomats were seen as driving coalitions, “whiffing interests” and spearheading initiatives. “We just do not see such engagement any more from the Indians,” a senior Latin American diplomat told us.

Instead, India is perceived as being too focused on its soft powers abroad; that too primarily engaging with the diaspora, who are widely seen as key supporters of the current administration.

“These days, the Indian mission is increasingly getting drawn into organising cultural events, such as promoting Yoga and giving a platform to ‘godmen’. Our diplomats are not engaging enough with the others,” an Indian national who works in global health in Geneva, said.

Is multilateralism even a priority for India?

India’s visible lack of effective leadership in Geneva might also be explained by the overall change in the direction of India’s foreign ministry. A number of sources familiar with this transition suggest that for S. Jaishankar, the Indian minister for external affairs, multilateralism is not a priority. It is clear that India prefers to focus its energies on bilateral relations, whether it is with the US or the EU, sources say.

While it is indeed a time when decision-making in multilateralism has been fraught and difficult in many forums, observers say that India does have a big role in the global south.

“But it seems instead of working together with other developing countries, we want to be seen in the ‘big boys club’, knowing fully well and we are not really in the same league as China, for example,” says a keen watcher of India’s role in global health in Geneva.

“China got what it wanted,” says a global health law expert, referring to the footnote 1 in the adopted decision on the TRIPS Waiver.

If India does want to play an effective role – which it ostensibly wants – it will have to ensure that the best diplomats with the most astute negotiating abilities are deputed for some of the most complex and crucial negotiations that Geneva will see in the coming months and years. More immediately, it must engage more with other countries, and perhaps less with its own community.

Priti Patnaik is the Founding Editor of Geneva Heath Files, a journalistic initiative that tracks power and politics in global health which tweets at @filesgeneva . She is based in Geneva, Switzerland.