A major step towards gaining normalcy in relations would be to ease the visa process and allow people to meet. 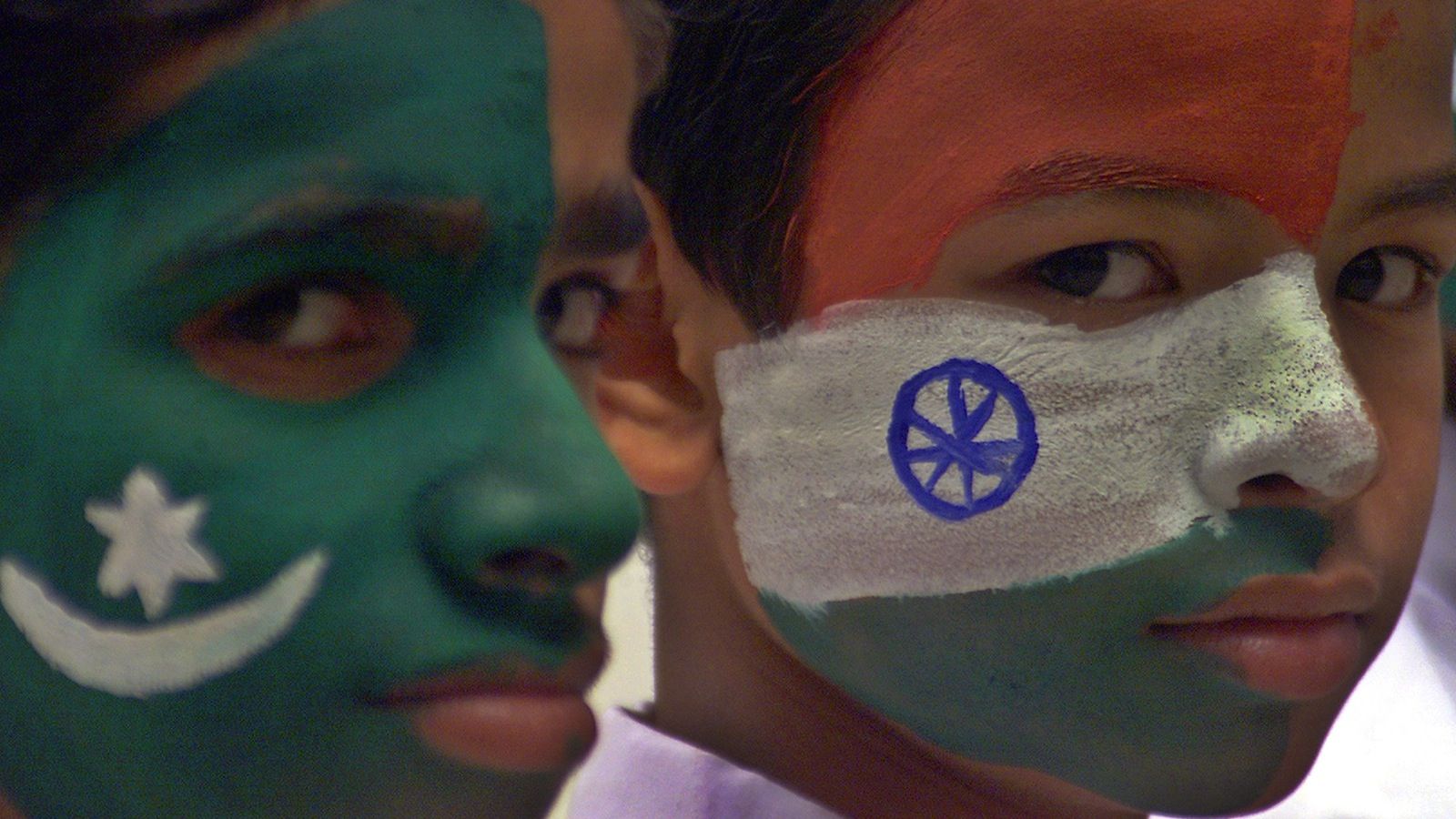 India and Pakistan are rising above their differences and joining hands for a humanitarian cause – they have agreed to exchange vulnerable prisoners (women, the elderly over 70 years and those with special needs), as well as revive the Joint Judicial Committee that has not met since 2013. They will also allow medical experts from both sides to meet and examine mentally challenged prisoners in preparation for their repatriation.

The issue of vulnerable prisoners came up when the Pakistan envoy Sohail Mahmood met the external affairs minister Sushma Swaraj in October 2017. At a subsequent meeting, “There was this feeling that while there is no change in the stated positions on key issues and no possibility of a structured dialogue process is likely to begin anytime soon, the two sides could look at making progress on possible humanitarian issues,” according to an unnamed official quoted by the Hindustan Times.

This appears to be in line with the “more nuanced Pakistan policy” that India has embarked upon, commented senior journalist Jyoti Malhotra, writing in the Indian Express on February 26, after India’s invitation to Pakistan’s commerce minister, Pervaiz Malik, to participate in the informal WTO ministerial meeting in Delhi on March 19-20.

Terming India’s invitation as a “significant diplomatic outreach”, Malhotra suggests that the impetus for this re-evaluated policy comes from Delhi’s realisation that beyond putting pressure on the US and rest of the world to make Pakistan “fall in line”, India too must also be “seen to be doing” something.

It is a good sign that despite hostilities, both countries have kept open a channel of communication through their national security advisors Ajit Doval and Nasser Janjua who last met in December 2017, away from the media glare.

The international community’s pressure on India to “reach out” to the Pakistani government and its civil society has also borne fruit. Delhi has withdrawn its objections to participating in multilateral meetings with Pakistan, reports Malhotra. India’s refusal, and that of some other nations, to attend the SAARC summit in Pakistan in 2016 had led to the summit being cancelled.

A few weeks ago, a four-member team from Pakistan’s security and intelligence establishment – including the director-general in charge of counter-terrorism in the foreign ministry – attended a meeting in Delhi with delegations from other Shanghai Cooperation Organisation (SCO) nations (January 31-February 2). This follows India and Pakistan’s agreement in Kazakhstan, June 2017, as SCO’s newest members, to keep their quarrels, including Kashmir and terrorism, out of international meetings.

Both country’s political representatives then stood together at the Turkmenistan-Afghanistan-Pakistan-India Pipeline inauguration ceremony on February 23, notes Malhotra.

Meanwhile, violations of the 2003 ceasefire in Kashmir have been making life hell for border dwellers. Civilians and soldiers on both sides are being killed, survivors suffering physical and mental trauma, livestock and buildings including schools and homes being destroyed.

Ceasefire violations over the past month have escalated from small arms fire and mortar shelling to heavy artillery exchanges. Each side blames the other, refusing to acknowledge its own role. Both are almost equally responsible, going by data from the Indo-Pak Conflict Monitor, an independent research initiative that monitors ceasefire violations. 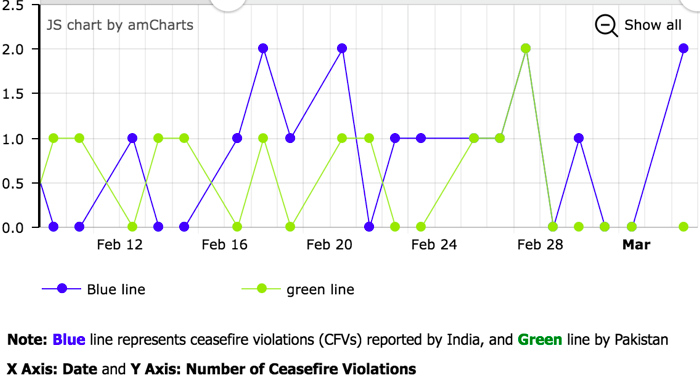 India and Pakistan’s nuclear-armed status means this is an issue the world can ill afford to ignore.

Their recent agreement on prisoner exchanges gives hope that the space thus gained can be opened further with more focus on low-hanging fruits.

A major step towards re-gaining normalcy in relations would be to ease the visa process and allow people to meet. The current situation is a far cry from the situation envisaged by Pakistan’s founder M.A. Jinnah, Quaid-e-Azam the great leader, who wanted neighbourly relations to be like those between Canada and the US.

There is a virtual freeze from the Indian side, causing great hardships to ordinary people. Families are unable to go across and share joy or grief on the other side. Even medical visas are being delayed – two-year-old Maeir Jawwad in Karachi with a congenital heart condition requiring urgent surgery in Delhi has been waiting since December for a visa. A cancer patient, denied an Indian visa after waiting for three months, is now headed to China. Religious pilgrimages fare no better – recently, 500 Pakistanis wanting to visit Ajmer Sharif were denied visas.

“Had there been no visa issue, so many of us would have gone across to Lahore for Asma Jahangir’s funeral,” commented activist Kamla Bhasin at a well-attended memorial for the late iconic Pakistani human rights lawyer in Delhi.

Away from bellicose media grandstanding and visa denials, it’s a different story.

Despite the difficulties, cross-border marriages still take place – #pyarborderpaar. Travelers who manage to go across are vocal about the love and hospitality they receive in the ‘enemy’ country.

Virtually, millions of Indians and Pakistanis are connecting through social media. WhatsApp groups connect Indians and Pakistanis from various sectors – journalists, writers, researchers, families. New cross-border friendships being formed on Facebook number not a few hundred or thousand a day, but about 2.6 million a day, according to www.facebook.com/peace, which tracks the number of friendships formed daily in three conflict regions. 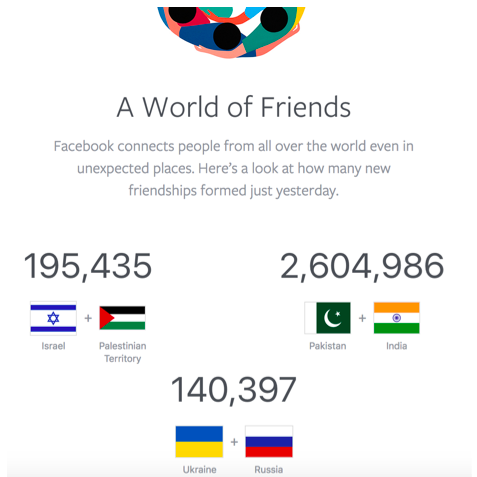 People are increasingly questioning and discarding the narrative of blaming the other, refusing to be bullied by ultranationalist allegations of treason if they refuse to accept the idea of “my country right or wrong”.

All this is drowned in the media din and ‘trending’ hashtags like those supporting an Indian trade union’s ‘ban’ on Pakistanis working in the Indian film and music industry.

“We have to rectify the situation for art and culture at home, and not promote bans for artists anywhere,” says Islamabad-based activist musician Arieb Azhar. “During the Zia era, several of our artist associations sold out to the prevalent fascist mindset of the state, the same as they are doing today in Modi’s era in India. Our war is against mindsets, not countries”.

Building on the prisoner exchange agreement, Pakistan has suggested expanding the agreed-upon categories to include those over 60 years of age and those under 18 years.

Peace-lovers second the Pakistan foreign minister’s hope that India agrees to these proposals, as well as his desire that through such initiatives, the two countries will “embark on the road to a comprehensive dialogue and make a conscious effort to de-escalate the extremely vitiated current environment and the situation on the Line of Control and the Working Boundary”.

Additionally, easing the cumbersome visa regime will go a long way towards improving relations. Ending the culture of impunity and enforcing rule of law will also help ease tensions and signal the political will that is necessary for improved relations.

India has long demanded that Pakistan act against those allegedly behind the November 2008 Mumbai attacks like Hafiz Saeed and Zia-ur Rehman Lakhvi. Proceeding firmly against criminals no matter where they struck and with what motive, and being transparent about the process, would be in Pakistan’s own best interests. This could help regain the ground lost by lack of transparency around the case of Indian national Kulbhushan Jadhav, held in Pakistan on espionage charges since March 2016 and subsequently sentenced to death.

Establishing the rule of law and signalling zero tolerance for criminality – whether it is against India or internally – is essential for Pakistan’s own peace and security. It would also help normalise relations and contribute to peace in South Asia.

Our children’s future depends on this.