The government and its master spy, Ajit Doval, should have dealt with the kidnapping of 39 Indian workers with secrecy and avoided raising the hopes of their families. 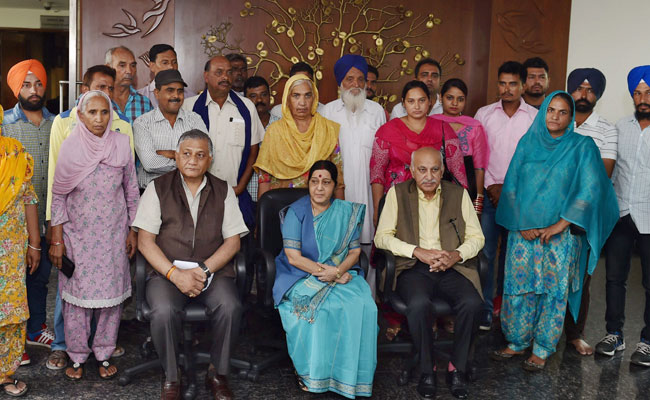 The National Democratic Alliance (NDA) government’s mismanagement of the Mosul tragedy, affecting 39 Indian workers and their families, was entirely due to their inexperience in handling foreign security affairs and a pathological chutzpah in assuming they could manage everything in India and abroad.

Their very first act in May-June 2014 was to close down of the Ministry of Overseas Indian Affairs (MOIA) and make it a minor adjunct of the Ministry of External Affairs Ministry. Their inexperience in understanding foreign dynamics, especially in the West Asian-Gulf region, made them ignore the fact that MOIA was our vital link with the 15 million Indian diaspora –  the largest in the world.

Did the Modi government not know that the MOIA was created in 2004 precisely because the MEA, the parent ministry, could not pay enough attention and look after this heavy responsibility due to its preoccupation with diplomatic obligations? Secondly, this segment of our underprivileged, uneducated and often exploited population needed assiduous attention as a welfare measure. Finally and most importantly, this group of people has been consistently remitting precious foreign exchange to their home country, much more than the foreign direct investment (FDI) for which we spend crores. In 2014, they remitted $70.3 billion while FDI inflows were only $35 billion.

Yet this revenue facilitating ministry was wound up and relegated as an unimportant division in the MEA. Occasional tweets from our external affairs minister in selective distress cases did nothing to alleviate the overall problems of our workers as they were dispersed far away from the embassies, as in the case of Mosul.

The quantum of attention given to the present MOIA division of the MEA can be gauged by perusing the MEA annual report for 2017-18 (374 pages) – MOIA’s work is just 7 pages and is given the lowest priority, on pages 226- 233, after all the “creamy layers” of bilateral, multilateral, international diplomacy and protocol matters are narrated. That was not the case earlier. The last annual report of the MOIA (2014-15) was 80 pages.

Painting a rosy picture where there was none

Nobody is claiming that things in Iraq, especially in Mosul and its periphery, were normal and that our embassy was at fault for not keeping abreast of the latest day-to-day developments. In 2014, the Islamic State (IS)  occupied the area from central Syria to the outskirts of Baghdad, including major cities like Mosul, Fallujah, Tikrit and Raqqa. They seized Mosul, including the airport, on June 9-10, 2014 and cut off road links with other cities, including Baghdad. Iraqi military and administrative authorities fled from the city. Nearly 5,500 civilians were reportedly killed according to UN estimates. Reports say that “ghost soldiers” – a result of corruption – were a major reason for the fall of Mosul. On record, there were about 30,000 soldiers and policemen to guard the city, but in reality, there were only 10,000 ill-trained men there, who fled when the IS fighters arrived.

There was utter confusion. Nearly 5,00,000 people from Mosul and Nineveh fled. IS fighters freed prisoners, looted banks, and seized Black Hawk helicopters. They went on a kidnapping spree to collect funds. First they seized 32 Turkish lorry drivers. Then they abducted 49 personnel from the Turkish consulate on June 11.

When news emerged of the abduction of 39 Indian workers from Mosul, the highest levels of the Modi government spoke of taking measures to rescue the hostages. The picture they painted at that time was rosy and reassuring, and out of sync with ground realities. Instead of  conveying unrealistic messages to the families of hostages, the government should have left media management to the professionals in the MEA, who would know how to convey guarded messages against the background of such turmoil in Iraq.

On June 20, 2014, the Daily Mail published a reassuring headline, “We will rescue all abducted Indians’, pledges National Security Adviser as news emerges that one hostage escaped”. It said that the crisis management team, under national security adviser (NSA), Ajit Doval, was working assiduously to ensure that this mission fructified quickly. The prime minister was also coordinating the efforts through “Doval, R&AW chief Alok Joshi and Intelligence Bureau Director Syed Asif Ibrahim to achieve closure on the matter”.

It also said, “Doval, one of the finest minds on intelligence, told Mail Today, ‘the government is totally seized of the matter, there are some grey areas and some bright spots on the horizon right now, but we are confident of a swift resolution to the issue. We are working in a very professional manner to bring our people back so that they can rejoin their families.’”

The irony is that these claims were made even after the one hostage who had escaped had already told the Indian authorities that the remaining 39 had been mercilessly gunned down by IS men in Badush near Mosul.

On July 8, two reports appeared, one in the The Hindu and the other on India TV News. The Hindu report’s headline was, “NSA Doval went on secret mission to Iraq”. It added that, “India’s diplomatic outreach to bring home 46 nurses as well as help thousands of other Indians in Iraq leave the violence-torn country was steered by National Security Adviser Ajit Doval and Intelligence Bureau Director Asif Ibrahim, who flew to Baghdad and Riyadh respectively last month”.

India TV News went much further: “The master spy, Ajit Doval, went on secret mission to Iraq”. It said: “Ajit Doval flew to Damascus and used the Syrian agencies who had contacts with the ISIS. Though ISIS had declared war on Syria, there are many non-state actors who are friends of the dissidents. These agencies were friends of the master spy of India”.

Strangely the report also added: “The announcement that Ajit Doval was made NSA saw Dawood Ibrahim go underground. Doval had gone underground and surfaced in Pakistan to come back to India with a dossier on Pakistan N-Plant. Laldenga, founder of Mizoram National Front, an outlawed outfit, signed a peace accord with India, the reason being Ajit Doval went to Mynamar and came back with six commanders of the front. Before the conduct of Operation Blue Star at the Golden Temple, there was an Operation Blue Thunder. A Pakistan ISI agent met Bhindranwale and he surfaced in Delhi as Doval with a file on the evidence of the neighbour helping Khalistan movement”.

One cannot fault the NSA for his overzealous admirers in the media. But such reports resulted in the public placing too much confidence in their rescue attempts, especially since the Turkish government could negotiate and obtain the release of 49 consulate hostages on September 20, 2014. Western reports said that details regarding the rescue remain hidden and continue to be so even now. Some reports said that Ankara reassured the Islamic State leadership that their “actions against ISIS would be limited in nature and it wouldn’t play a primary role in any military coalition.” Yet another report said that their intelligence agency “developed a strategy — using sources in Mosul, reconnaissance drones and electronic communications — to free the hostages after analysing previous Islamic State kidnappings in Syria and Iraq. The same strategy was used to win the release of a group of Turkish truck drivers in early July”.

Several other intelligence operations leading to the rescue of hostages can be quoted. All were done in great secrecy – not monitored by the media. Despite the avowed “no negotiations” policy, the US secretly negotiated with the Taliban in 2014 to secure Sergeant Bowe Bergdahl’s release by freeing 5 Taliban terrorists, who had killed American troops, from Guantanamo Bay.

In 2011 Israel, the NDA government’s role model, negotiated with their bitter enemy, Hamas, to free one Israeli soldier Gilad Shalit, abducted in 2006, by releasing 1,027 Hamas prisoners. In September 2007, the NIS (South Korean Intelligence) earned international acclaim for getting 21 Christian missionary hostages released from the Afghan Taliban, who had abducted them on July 19 and killed two males. Details of this six week covert operation are still fuzzy.

If the NDA government really believed the hostages were still alive and was looking to do what it takes to bring them back, the professional handling of the situation required that its efforts be kept secret – both to ensure success (in the event of the hostages being alive) and to not convey undue hope to to the poor families, especially when the government had reason to assume they might already be dead.