Indian Surgical Strikes Against Terrorists in Pakistan: What We Know, What We Don't Know

Military sources say small raids across the LoC have taken place in the past but the scale of the latest strikes and the fact that the government has chosen to speak about them have created a new situation. The Wire breaks it down. 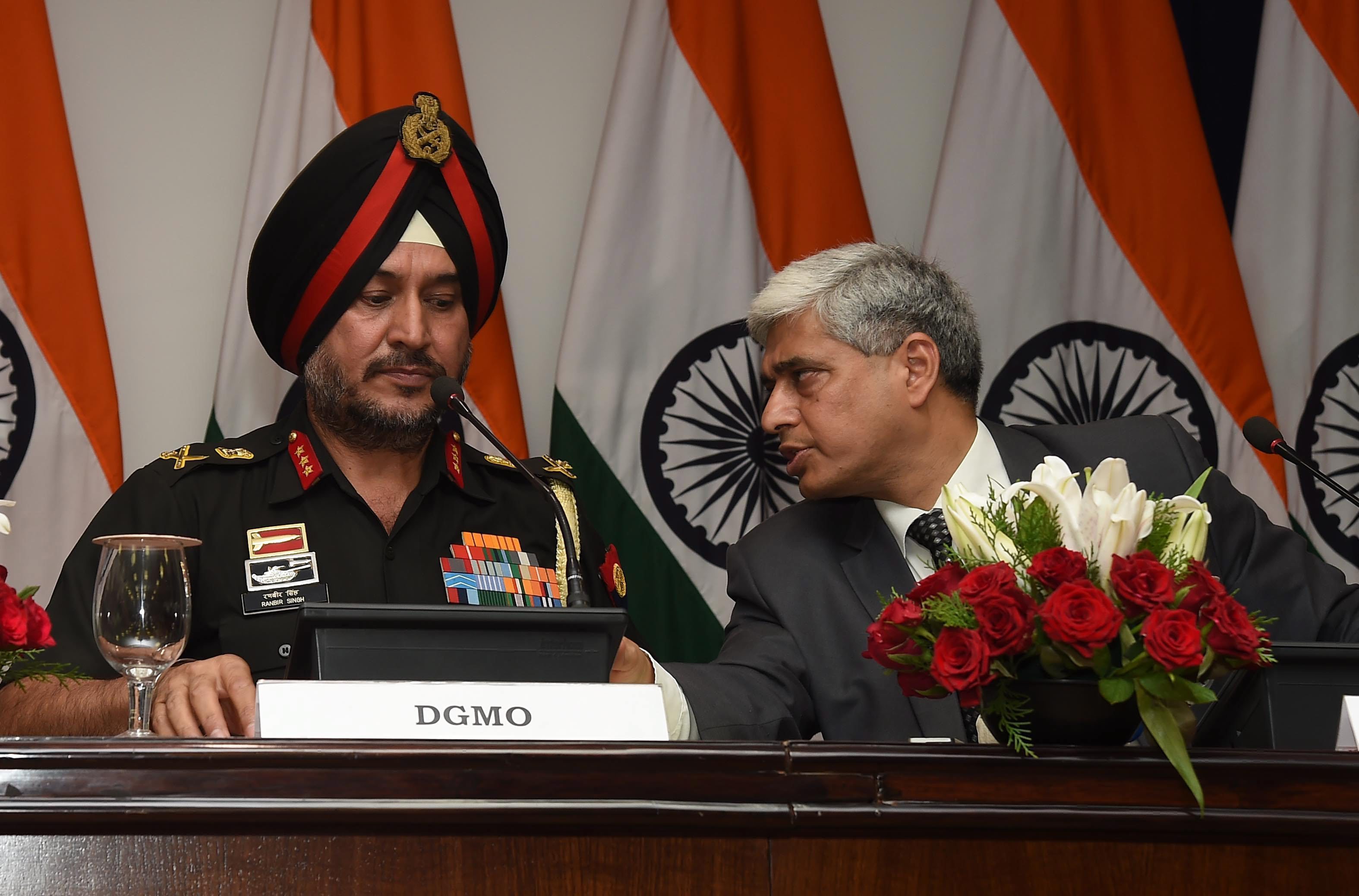 “Based on very credible and specific information which we received yesterday that some terrorist teams had positioned themselves at launch pads along the Line of Control with an aim to carry out infiltration and terrorist strikes in Jammu & Kashmir and in various other metros in our country, the Indian army conducted surgical strikes last night at these launch pads.”

With these words, spoken shortly after noon on September 29, 2016, India went public with what appears to be a paradigm shift in the country’s war against terrorist groups operating from bases on the Pakistani side of the Line of Control (LoC) dividing Jammu and Kashmir.

Director general of military operations Lt Gen Ranbir Singh provided no further details about the strikes themselves, other than to note that during the “counter terrorist operations, significant casualties have been caused to the terrorists and those who are trying to support them. The operations aimed at neutralising the terrorists have since ceased. We do not have any plans for continuation of further operations.”

Military sources say small raids across the LoC have taken place in the past but the scale of the latest ‘strikes’ and the fact that the government has chosen to speak about them have created a new situation. To be sure, this is not without its own complexities and even risks. The Wire breaks it down.

1. In legal terms, India has cast the strikes as pre-emptive self-defence in the face of an imminent attack by terrorists across the LoC, set against the background of Pakistan’s refusal to act against these groups despite having an obligation to do so. Pre-emptive self-defence is a controversial concept in international law. Over the years, however, in the context of the US-led war against terrorism, there is hardly any state that can or will criticise India for invoking it.

2. The strikes – in plural – were targeted at terrorist infrastructure rather than Pakistani military installations, though casualties were also inflicted on “those trying to protect” the terrorists there, meaning, presumably Pakistani troops. Of all the military options available to the Indian side, this was considered by analysts to be the first – and least costly in terms of escalatory potential.

3. The DGMO said the surgical strikes were conducted by the “army”. This would appear to rule out the use of the air force or fixed-wing aircraft, but the mechanics of the operation are not being officially spelt out. The DGMO took no questions after his briefing. Unofficially, the army says the strikes targeted seven different ‘terrorist launch pads” at a distance of 500 metres to about a kilometre across the LoC. If airstrikes are ruled out, the other means of hitting a target would be: firing across the LoC on specific installations using mortar, artillery or even missiles, or raids by special forces, moving either on foot or using helicopters to enter. If seven targets were hit, as some sources have put out, a combination of these methods could have been used. The Pakistani side says only cross-LoC firing took place. PTI quoted unidentified Indian “sources” as saying the also strikes involved soldiers on the ground. One journalist with links to the military and the BJP tweeted details of the specific locations and army units involved but there has been no official confirmation of this:

Surgical strikes happened on launch pads and posts in PoK from India's 19, 25 and 28 Divisions located in Baramulla, Rajouri, Kupwara

4. The Pakistani side announced on Thursday morning – before the Indian DGMO’s press conference – that two of its soldiers had been killed and nine injured in cross-LoC firing by the Indian side in the early hours of the day. The Pakistani military spokesman subsequently released a statement denying there had been any Indian cross-border raids and that the Indians were claiming cross-LoC fire as “surgical strikes”.

5. One indication that the ‘surgical strikes’ involved more – perhaps much more – than heavy shelling is the speed with which the United States got into the picture. The White House issued a statement Thursday morning (Indian Standard Time) using strong words to condemn the September 18 “cross-border attack” at Uri which precipitated the current downturn in India-Pakistan relations and stresses the need for Pakistan to take effective action against UN-designated “terrorist individuals and entities, including Lashkar-e-Tayyaba, Jaish-e-Muhammad and their affiliates.” The statement came after Indian national security adviser Ajit Doval received a telephone call from his US counterpart, Susan Rice. While no details about what the two NSAs spoke about are available, Indian officials say the conversation took place before the Indian army acted.

6. Given the risk involved in simultaneous raids by special forces in multiple locations in hostile territory – countries that have conducted such raids in past, eg. Israel or the US, typically do them singly – the targets, if indeed they were hit by commandos rather than cross-LoC firing, are unlikely to have been very large or heavily fortified. One military analyst The Wire spoke to said the strikes were likely “small punitive raids … this was not like the US raid against Osama in Abbotabad”.

7. The Pakistani ability to downplay India’s “surgical strikes” is inversely proportional to both their scale and the damage they inflicted. Large-scale operations and heavy casualties – especially on the military side – are hard to ignore, or represent as the result of cross-LoC shelling. So the Indian side, which presumably spent several days planning the operation, chose its targets carefully. The aim: to send a message to the Pakistani establishment that India is prepared to take its gloves off, without tempting Rawalpindi to climb a rung up in the escalatory ladder.

8. The Pakistani response claiming no surgical strikes took place may, paradoxically, allows Islamabad to keep the political and military temperature down, which would also suit India. To that extent, the Indian reluctance to go public with details of the strikes may help prevent the building up of public pressure in Pakistan for some sort of retaliation. The more specifics the Indian side gets into in public, the harder it might be for Pakistan to be dismissive.

9. At the same time, the fact that the Pakistani side is insisting no surgical strikes took places raises questions about their value as ‘vengeance for Uri’, as some TV channels are billing this, and their deterrent effect on the Pakistani military. To quote the well-known defence analyst, Colonel Ajai Shukla (retd.),

Much ado about claimed Indian "cross border strike"… which has hurt Pak so much that they flatly deny it took place! #IsThisPunishment?

10. The timing of the strikes may have been linked to specific threat perceptions on the Indian side, as the DGMO said, but it comes uncomfortably close to the impending retirement of Pakistan’s chief of army staff, General Raheel Sharif. Whatever the Pakistan army may choose to tell its public about the Indian strikes, General Sharif’s colleagues know what happened. If he wants an extension, as some news reports suggest, there is a danger he might calculate that a failure to respond to the Indian action will weaken his chances – or ruin his legacy as chief.

11. Pakistani options to retaliate consist of intensified shelling across the Line of Control and international border, encouraging another Uri-type attack on Indian forces in Jammu and Kashmir, instigating terrorist strikes in Indian cities, or on Indian targets in a third country, especially Afghanistan. Of these, the first and last retaliatory options would probably be the easiest for Rawalpindi to execute.

12. If indeed Susan Rice’s telephone call to Ajit Doval was the result of the apprehension that India was getting ready to  strike, the US statement which followed seems aimed at addressing Indian concerns – rather than Pakistani ones. The message from the White House appears to be that ‘not only will we not be publicly criticising India for its actions but that to the extent to which Pakistani inaction is responsible for this, we will ratchet up the pressure on Islamabad’ to act against the terrorists operating on its territory.

13. Pakistan’s refusal to acknowledge it has been hit also makes it easier for countries around the world to remain noncommittal about the consequences of the Indian action.

14. The dilemma the Modi government now faces is this: Having pegged its military action at a level that would allow the Pakistani side to claim to their public that no strikes took place, what is the guarantee that Rawalpindi will now change course and stop supporting the various terrorist groups ranged against India? What if, as is likely, the terrorist groups carry on as usual with the tacit encouragement of the ISI? Having upped the bar by launching strikes and publicising them, the public clamour for even more decisive army action is bound to follow the next incident, no matter how small it may be in comparison to Pathankot or Uri. But the harder India hits Pakistan, the greater are the chances of Pakistani retaliation and escalation. This is where the United States and other world powers come in. Having seen that India means business, Washington has its work cut out for it.

Note: This article has been updated to correct the earlier claim that the telephone call between Susan Rice and Ajit Doval happened after the Indian action. The telephone conversation, in fact, occurred before the action.

Note: This article has been edited to correct the rank at which the military analyst Ajai Shukla retired from the Indian army. He was a colonel and not a major as was initially stated.