In addition to boosting trade and investment ties between Central Asia and South Asia, it could serve as a future platform for India-Pakistan dialogue. 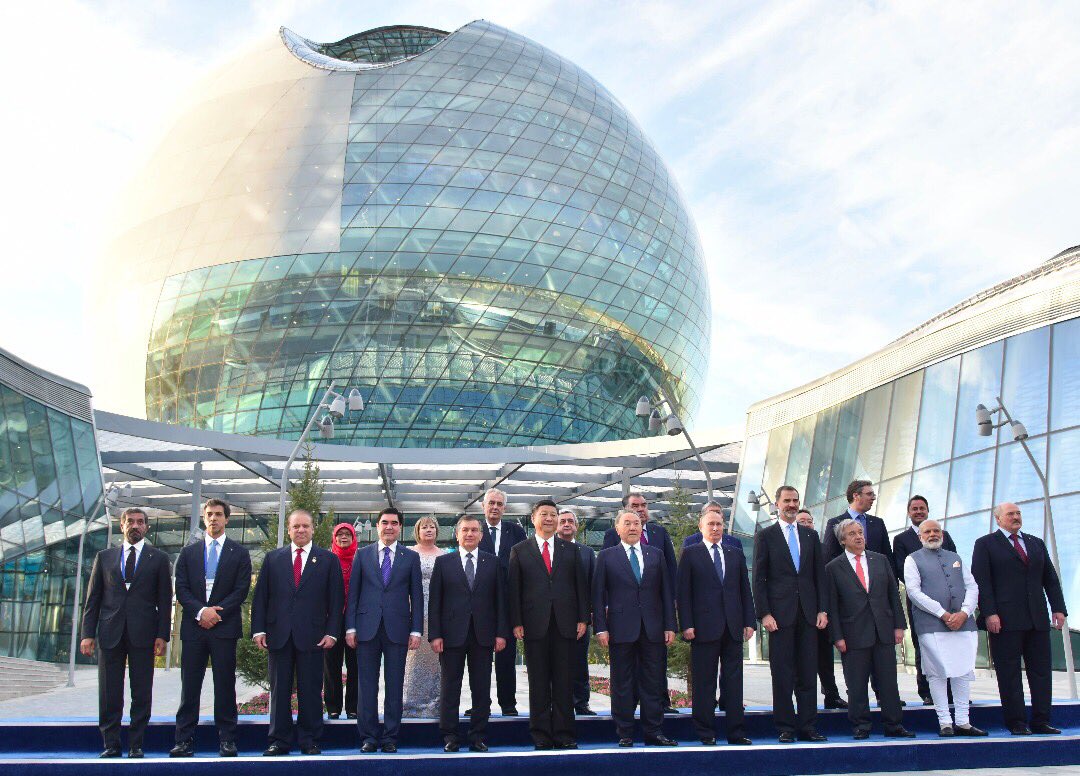 Astana (Kazakhstan): India and Pakistan were formally inducted as the newest members of the Shanghai Cooperation Organisation (SCO) on Friday in the first-ever expansion of the six-member group.

With a flurry of signatures, the six heads of state of Russia, China, Uzbekistan, Kazakhstan, Tajikistan and Kyrgyzstan, brought in 1.5 billion people into their fold in a move that will link central Asia directly with the teeming masses of Southern Asia.

The SCO has agonised over the expansion for a long time, with India indicating its willingness to join SCO for a decade. India had first attended a SCO summit in 2005 as an observer. However, it took substantial negotiations for the group to formulate a process to include new members. There was also jostling between Russia and China which one would get their ‘ally’ (India, Pakistan) into the group first.

According to the criteria finalised in 2010, a new SCO member has to fulfill eight rules, which included that it should not be in “armed conflict” with other states or have any sanctions imposed by the UN Security Council. Even after 2010, there was not much clarity among the members about the need for expansion. Finally, the green light was given in 2014, which is when India’s formal application was submitted.

“A senior official said that three years was not that long. “This is the first time that they were opening up, so they were also making up rules,” said a senior government official.

In the end, India and Pakistan had to sign around 38 agreements to fulfill the formalities for SCO membership. On Friday, Kazakhstan President Nursultan Nazarbayev announced that the secretariat had informed that the two South Asian countries had completed all procedures and that they were now full members of the club. “It’s s a symbolic victory to have two rivals join the same organization, and it allows Russia and China — and Kazakhstan, for that matter — to be able to point to the positive role they are playing in the region,” said Zachary Witlin, an Eurasian analyst with political risk consultancy, Eurasia group.

Sarah Lain, research fellow specialising in Russia and Central Asia at Royal United Services Institute for Defence and Security Studies (RUSI), felt inclusion of India and Pakistan could be related to the varying dynamic between the two dominant nations, Russia and China.

“Overall Russia is losing influence in the SCO as China’s economic might in Central and South Asia increases and the rhetoric around the BRI takes over other foreign policy visions,” she said.

With BRICS becoming less relevant, Lain stated, admitting India and Pakistan does help reinforce its call for a multi-polar world. The symbolism of expansion “endorses a narrative of an SCO success story, that is, it is a non-US led club that other powers want to join”, she noted.

Witlin made a similar argument that both China and Russia want to bring a wider range of countries into a single forum “bolstering the notion that they are leading an alternative to Western institutions.”

While Russia wants to advance its vision of “so-called Greater Eurasia”, China looks at SCO as “also another means to discuss its One Belt, One Road initiative and to coordinate with other countries on pretty much any issue of interest to the members”.

Admittedly, there are risks to the two South Asian rivals joining the Eurasian club. “This could obstruct the consensus required for SCO agreements. However, the hope is that by being part of the SCO, this will provide a platform for dialogue between the two, as well as with other members, that could help soften the tension between India and Pakistan,” said Lain.

She noted that the premise of SCO-initiated India-Pakistan thaw was “questionable”, but pointed out that the group had “provided a useful platform for dialogue between Central Asian leaders who, in the past, have also experienced personal and political tensions”.

Witlin, however, felt that SCO “cannot and does not intend to transform the India-Pakistan relationship”.

Sharif asserted that SCO leaders should “leave a legacy of peace and amity for our future generations, not a toxic harvest of conflict and animosity”. “Instead of talking about counter-weights and containment, let us create shared spaces for all,” he added.

In his speech, Sharif did not raise Kashmir, which it has being doing without fail at various UN platforms.

A day earlier on Wednesday evening, Indian and Pakistan Prime Ministers had exchanged pleasantries at the leaders’ lounge, ahead of the gala concert at Astana Opera House. Indian official sources had said that Modi had inquired after Nawaz Sharif’s health, as this was the first time that they met after the latter’s open heart surgery last year. In fact, the two South Asian leaders came face-to-face after a gap of 18 months.

Even on Friday, the two had ample opportunity to encounter and – apparently even shake hands – as they took part in the main events of the SCO summit, as well as, at the opening ceremony of Astana Expo 2017.

Pakistani news channel Geo carried a photograph of the two PMs shaking hands warmly. This encounter apparently took place when the two leaders were walking in to the Palace of Independence at the start of the SCO summit’s meeting in the expanded format at around one.

There was no confirmation from the Indian side about the authenticity of the photograph, however sources added that two leaders did probably exchange more ‘chit-chat’ at the start and end of the main session.

On Thursday afternoon, the Indian media had waylaid Sharif at his hotel Ramada Palace to get an inkling about the possibility of a meeting with Modi. The Pakistani media got a chance to do the same to Modi at Palace of Independence, where they quizzed him about his interaction with Sharif and Kashmir – but the Indian PM smiled and remained silent.

Pakistani official sources had claimed that Islamabad had been “under pressure” from Russia and China to bring down the temperature on its eastern border and reach out to India.

While Sharif made a notable gesture to congratulate India for also joining SCO in his speech, Modi did not refer to the neighbour by name in his remarks.

The entry of two new members in SCO was also reflective of the fact that move was about boosting trade and investment ties in Central Asia.

Witlin felt that this could be done through China’s Silk Road Economic belt, though India does have an aversion towards the flagship Chinese initiative.

In his speech, Modi said that regional connectivity with all SCO was the “main priority” of India. “…we entirely support the connectivity that will integrate our economies and build trust among the countries and respecting the sovereignty and territorial integrity should be the key factors,” he said, making a dig at the Chinese OBOR project. India had been the only big country which had not participated at the Belt and Road initiative summit in Beijing last month. He raised the development of the Chabahar port and the North South Transport Corridor (NSTC) as important links between India and Central Asia.

Witlin suggested that India could go the bilateral way. “Kazakhstan, for instance, is aggressively attracting new investment and is preparing for a wave of privatizations in major state-owned enterprises from 2018-2020, and India is a potential suitor in this regard,” he pointed out.

Unlike India, Sharif on the other hand was an enthusiastic purveyor of BRI, claiming that $52 billion China Pakistan Economic Corridor will “benefit the entire SCO community”.

Except for Modi, nearly every head of state appreciated the linkage of China’s Belt and Road initiative, which was also endorsed in the Astana Declaration. It remains to be seen if the next 2018 SCO declaration – which will be first time that India will join negotiations – would also repeat the reference to OBOR. Incidentally, China will be the host and chair of the SCO after Kazakhstan.

The SCO began with a security focus, but has now largely expanded into trade and connectivity.

“While its interest in security and counter-terrorism is notable, the point of the SCO is to talk under the same roof. Border and economic issues garner plenty of attention as well — for instance, one of the organization’s most recent agreements to come into effect focuses on international road transport,” said Witlin.

He pointed out that In Central Asia, the CSTO (Collective Security Treaty Organisation) is the more significant security organization, and most military cooperation happens on a bilateral basis anyhow with Russia. “But the CSTO is not an effective regional military bloc because of sensitivity among Central Asian states about national sovereignty and Russian (and increasingly Chinese) influence,” he said

Interestingly, Lain argued that China could have had an interest in roping in Pakistan into SCO as it provides “an acceptable multilateral platform” for engaging Islamabad on counter-terrorism – “given that this is a significant threat to the China-Pakistan Economic Corridor”.

“Rather than applying bilateral pressure, the SCO provides China a more neutral forum to discuss the issue in the context of the fight against the ‘three evils’, the need for which is a central pillar of consensus between the current SCO members,” she said.

The ‘three evils’ are terrorism, separatism and extremism, which are the targets of the Tashkent-based Regional Anti-Terrorist Structure (RATS) under the SCO architecture.

“However, this discussion in itself could heighten the mutual accusations between India and Pakistan that each side is responsible for sponsoring terrorism,” she cautioned.

The Indian prime minister did raise the spectre of terrorism in his speech, asserting “that it is impossible to find a solution until all SCO members make concerted and coordinated efforts to fight the menace of terrorism, including radicalisation, recruitment, training and financing of terrorists”.

Modi, described terrorism as the chief violator of human rights, adding, “We have full faith that the SCO would give a new push to our efforts in fight against terrorism.”

Pakistan’s prime minister also raised terrorism, but largely in the context of patting himself in the back for turning the corner in the fight against terror domestically.

As full SCO members, Indian and Pakistan security forces will have to take participate together in counter-terrorist exercises.