For the last 18 years, Saudi Arabia has insisted that its relations with India and Pakistan are not linked to each other. That trend has continued.

New Delhi: Saudi Crown Prince Mohammed Bin Salman’s visits to India and Pakistan in the immediate aftermath of a deadly suicide attack on Indian security personnel in Kashmir have been a test of Riyadh’s policy to keep its relations with the two neighbours in strictly separate silos.

With Salman’s statements in Pakistan getting wide coverage, the Saudi visitor’s comments on terrorism in the Indian capital were minutely parsed and scrutinised. His travel itinerary for Asia had been decided months ahead, but finally took place under the shadow of the car bomb attack on a Central Reserve Police Force convoy which left over 40 dead on February 14.

During his Islamabad sojourn, the crown prince signed $20 billion worth of agreements with cash-starved Pakistan. More significantly, the joint statement released on Monday said that Saudi Arabia appreciated Pakistan’s fight against terrorism and included a line that the “politicisation” of UN listing should be avoided.

With India’s renewed pushing for designating Jaish-e-Mohammad chief Masood Azhar as a ‘global terrorist’ after the Pulwama attack, Salman’s statement was interpreted as a snub by several quarters. The opposition Congress party spokesperson took umbrage at the Indian prime minister’s decision to greet and hug the crown prince at the Delhi airport after his generous largesse to Pakistan.

On Wednesday afternoon, the crown prince declared that terrorism and extremism were “a common concern” for India and Saudi Arabia. Just before his short statement, he had led discussions with Prime Minister Narendra Modi and witnessed the signing of five agreements.

Standing next to Modi at a joint press appearance, the 33-year-old Saudi royal reiterated that “his country was ready to work in the intelligence and political arenas to coordinate our efforts”. He added that Saudi Arabia was ready to cooperate not just “with India, but also with our neighbours as well”.

Talks between the Indian and Saudi Arabian delegations. Credit: PIB

Modi was more expansive in his oral statement. Describing the Pulwama attack as a “brutal symbol” of the threat of terrorism, the Indian prime minister said that both countries “agree that there is a need to increase all possible pressure on countries supporting any type of terrorism”.

“Destroying the infrastructure of terrorism and ending its support – and punishing terrorists and their supporters – is very important,” he asserted, adding that Saudi Arabia and India have “similar views”.

The Saudi visitor didn’t refer to the terror attack in his oral remarks. The joint statement, however, noted that both leaders condemned the February 14 incident in the “strongest terms”.

There was no direct mention of Pakistan by either leader in their joint media appearance, but the joint statement cited Pakistan twice. First, the Saudi prince praised Modi for his “consistent efforts” to have friendly relations with Pakistan.

“In this context, both sides agreed on the need for creation of conditions necessary for resumption of the comprehensive dialogue between India and Pakistan,” added the bilateral document.

The last time that Pakistan was mentioned by name in an India-Saudi joint statement was 13 years ago. When King Abdullah was the chief guest at the 2006 Republic Day celebrations, the two sides “welcomed the ongoing dialogue between India and Pakistan and their continued efforts aimed at settling the outstanding issues between the two countries”.

Fast forward over a decade – and the context of Pakistan’s specific mention had changed dramatically.

Indian officials argued on Wednesday that the line for “creation of conditions” was advocating New Delhi’s position that action against terrorists was necessary to create “a conducive atmosphere” for dialogue.

Saudi Arabia’s joint statement with Pakistan also had a similar template on this subject, which indulged the host. It stated that the crown prince “praised” Pakistan Prime Minister Imran Khan’s efforts for dialogue with India and the Kartarpur corridor initiative, along with an assertion that “dialogue is the only way to ensure peace and stability in the region to resolve outstanding issues”.

The India-Saudi joint statement also implicitly referred to the one line in the Pakistan statement that had raised a lot of eyebrows.

The two sides noted the need for concerted action by the international community against terrorism, including through the early adoption of the UN Comprehensive Convention on International Terrorism, and underlined the importance of comprehensive sanctioning of terrorists and their organisations by the UN. (emphasis added)

The reference to “comprehensive sanctioning” was the implicit rebuttal in Delhi to the “politicisation of UN listing” in Islamabad.

In a press briefing, the Ministry of External Affair’s secretary (economic relations) refused to comment on Saudi Arabia’s announcement of $20 billion investment in Pakistan, stating that each bilateral relationship stood on its own.

He noted that the reference to “comprehensive sanctioning” was to address the anomaly of terror groups getting listed in UN sanctions regime, but not their members – and vice versa. Pakistan-based Jaish-e-Mohammed was listed with the UNSC 1267 sanctions committee in October 2001, but the group’s head, Masood Azhar, has still not been cleared by the panel due to a ‘technical hold’ by China.

When asked about the specific sentence in the Pakistan-Saudi statement, T.S. Tirumurti demurred, “If you are really looking at politicisation, you know who is politicising it”. “I think people here assumed that the joint statement had to do with one particular individual (Azhar). It did not. The intention was that the process of designation is clear and not political,” he told PTI.

He asserted that any terrorist should be “designated”, but claimed that Saudi motivation was to ensure that countries “do not pit somebody who is a political opponent and put his name as a terrorist”.

In the aftermath of the Pulwama attack, top Indian diplomats held a series of briefings for ambassadors of foreign countries. Their line was that Pakistan should be censured more directly, with blacklisting at Financial Action Task Force and Masood Azhar’s UNSC listing.

According to Tirumurti, India underlined the “complicity” of Pakistan government in the Pulwama attack in the discussions with the Saudi side.

Al-Jubeir, who was demoted one rank to minister of state for foreign affairs in a reshuffle after controversy over killing of journalist Jamal Khashoggi, said that Riyadh did not want to see the current tensions escalate. “You have wise leadership in both the countries represented by respective prime ministers. I believe they will be able to find a way to de-escalate,” he stated.

However, he said that Saudi Arabia “will not involve ourselves into the tensions between India and Pakistan without being invited by both the countries”. Tirumurti also stated that Saudi Arabia had not offered to mediate between the South Asian rivals.

Former Indian ambassador Zikrur Rahman, who had been posted both in Riyadh and Jeddah, said that the Saudis have given a clear signal that they did not want to link relations between India and Pakistan.

“They are saying that our relation with Pakistan is in our interest and it is not against India. Same the other way around. Saudis don’t want to get involved in between us,” Rahman told The Wire.

This separation in the relationship between the two South Asian countries, Rahman said, was demonstrated literally by the crown prince when he went back to Riyadh for a few hours before arriving in Delhi.

“This is the first time that you have seen that crown prince has not come directly. Intentionally, they have gone back to Saudi Arabia and less than 24 hours, he came flying to India. This is basically to say that our relations with Pakistan and India are different,” he said.

Similarly, former ambassador Talmiz Ahmad also said that it was unfortunate that the India media had framed the visit of the Saudi crown prince through the Pulwama incident, which had cast “a long and deep shadow”.

Ahmad, who had been posted twice as India’s envoy to the desert kingdom, noted that the Saudis had “de-hyphenated” relations between India and Pakistan for the last 18 years.

The kingdom had close political ties with Pakistan since independence, which were burnished by the cold war. With India, relations had revolved around trade, energy and the large Indian expatriate population.

A post-liberalisation India, which had become one of the highest guzzlers of fuel, became tempting enough for the Saudi royals to court in the initial years of the 21st century.

“When external affairs minister Jaswant Singh visited Saudi Arabia in January 2001, it marked the commencement of political relations between us,” he said. 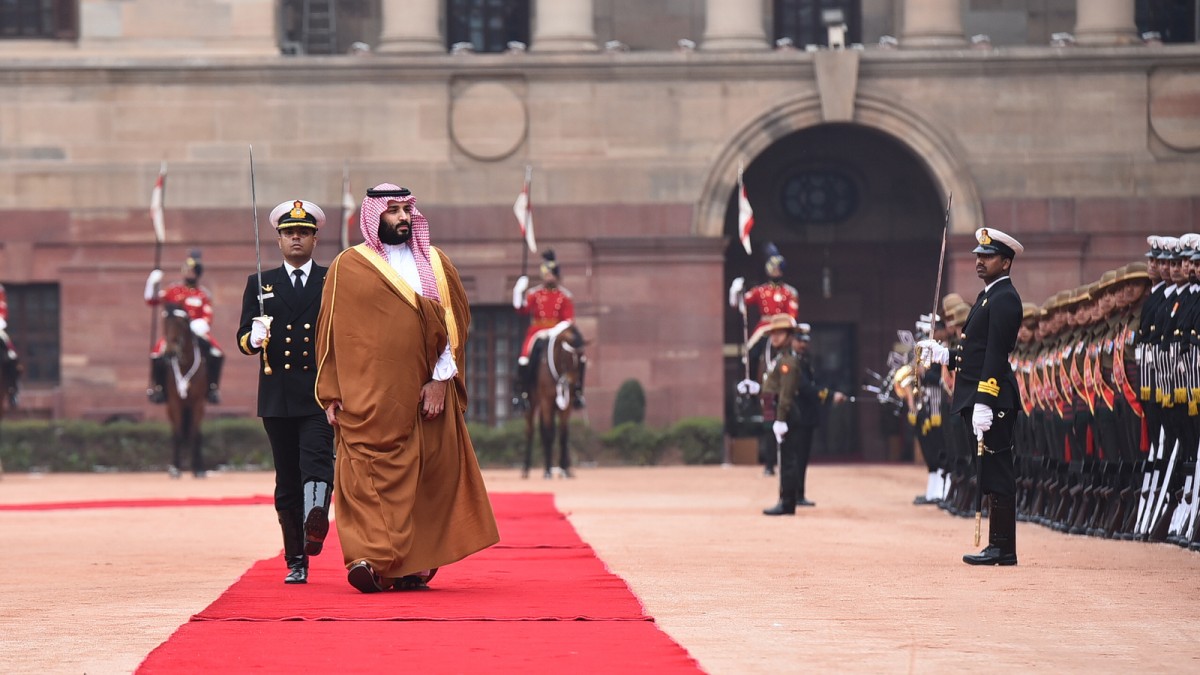 Ahmad recalled that Saudis established two important principles for the relationship during that visit. “They told us that that time we (Saudis) value relations with India on their own merit and these ties will not be influenced with ties with any other country. This was a very important clarification…till then Saudi Arabian policy used to be influenced by ties with Pakistan,” he said.

The former Indian Foreign Service officer noted the Saudi actions and statements was “reaffirming to us that there that there was no hyphenation”. “They de-hyphenated 18 years ago and that pattern has continued,” he added.

The second important step at the 2001 meeting was when the Saudi foreign minister read out a “substantive statement” on Kashmir that essentially stated that it was a bilateral dispute. “After the foreign minister finished reading it out, the external affairs minister said that he didn’t disagree with anything in that statement. This cleared the air immediately,” said Ahmad.

Incidentally, there had been some domestic criticism within Pakistan that the joint statement with Saudi Arabia did not mention Kashmir.

Here, Ahmad pointed out that joint statements are a product of quid pro quo negotiations and not “100% satisfactory to the host or the visitor”.

In the India-Saudi joint statement, Saudi officials had negotiated to include a sentence which “called upon all states to deny access to weapons including missiles and drones to commit terrorist acts against other countries”. India also had its way, with the joint statement calling on “all countries to renounce the use of terrorism as an instrument of state policy”.

While the Saudis had accepted Kashmir as a bilateral dispute in 2001, it took another seven years for the Gulf kingdom to have active counter-terrorism cooperation with India.

According to Ahmad, the 2008 Mumbai terror attack was the turning point for the Saudis. “The 26/11 attack made it very clear that that this was a jihadi attack. There was no connection with Kashmir and thirdly that it was sponsored by Pakistan. That is the context that they started to reach out to India for cooperation in counter-terrorism,” he said.

The cooperation in counter-terrorism has bene “very substantial”, with several terrorists also extradited to India over the years. “We have been able to interrogate even non-Indians in Saudi custody,” he said.

Also read | Jamal Khashoggi: What Is the Lesson to Be Drawn From the Saudi Past?

Ahmad asserted this was the reason that “we should not judge a relationship or even a visit on the basis of one episode”.

The release of the joint statement was, in fact, delayed by a few hours.

Sources told The Wire that the text of the paragraphs on terrorism had been readied much before Wednesday evening. But the release of the public document had to wait till after the official banquet by the president in honour of the Saudi crown prince.

It is learnt that Prime Minister Narendra Modi wanted to make an announcement during the banquet about the release of Indian prisoners. According to official figures, there are 2,224 Indian prisoners in Saudi jails. The Saudi delegation took some time to confirm that they were ready to free 850 Indian prisoners.

The Saudis also apparently wanted at the last minute to include a breakup of the announcement of “$100 billion investment” in the joint statement. The document indicated that this figure included delayed $44 billion west coast refinery, $10 billion through Public Investment Fund and another $26 billion worth of opportunities “are being explored”.