Shunning Rohingya Refugees Is a Bad Geopolitical Strategy for India

India's relationships with Bangladesh, Myanmar and China hang in the balance. 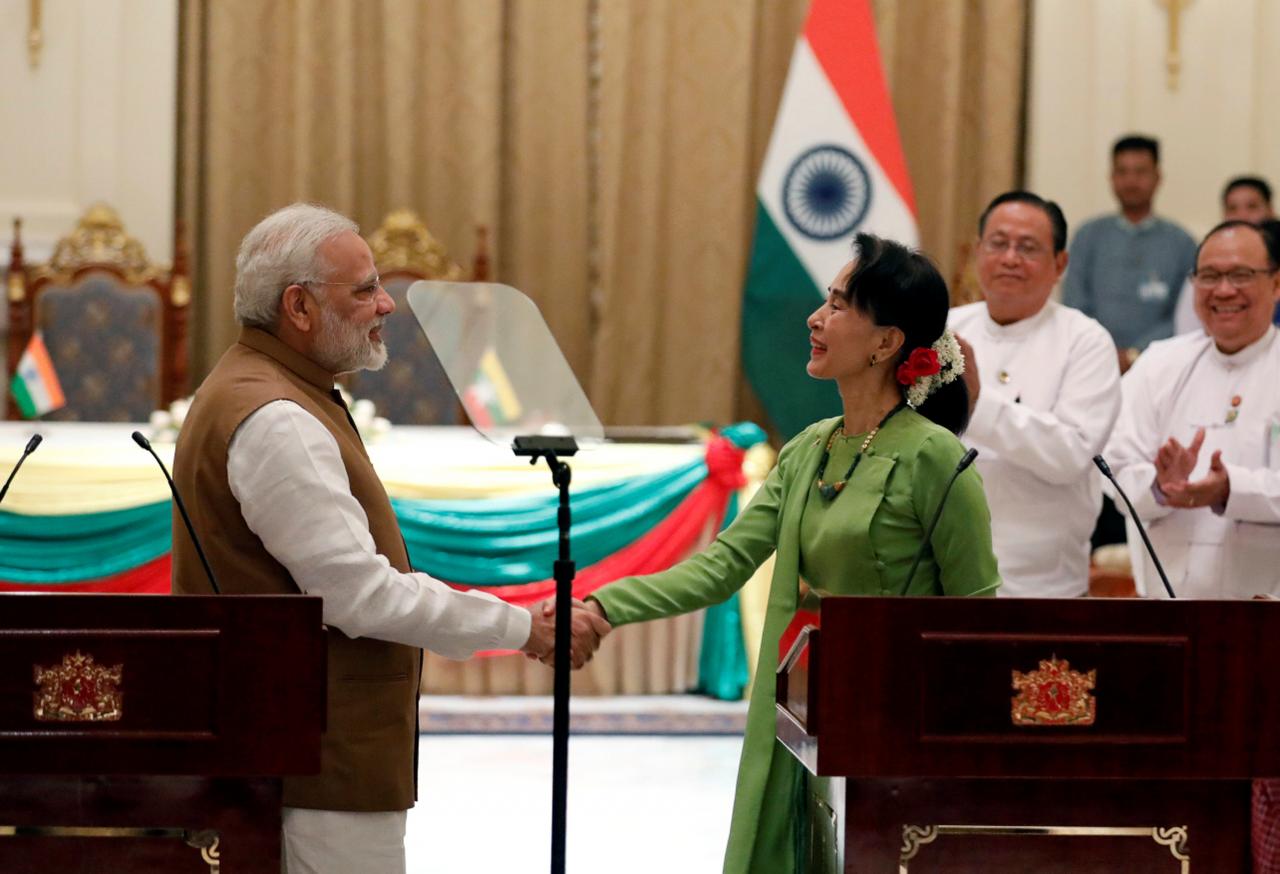 The Supreme Court has called on the government to approach the Rohingya issue with a judicious mix of concern for national interest and humanitarian values. Unlike the government, which has a tendency to securitise every issue involving Muslims, the apex court has urged it to also view it through the lens of the suffering of the refugees. There is also a larger geopolitical perspective that the government seems to be ignoring.

This is our relationships with Bangladesh, Myanmar and China. For both India and China, Myanmar is a strategic asset. For Beijing, its value lies in the proximity of its ports to its land-locked Yunan province. For India, Myanmar is important first as a land bridge to the ASEAN that helps open up its northeast, and second because it is a potential sanctuary for separatists who plague the same region.

Myanmar is rich in natural resources and New Delhi and Beijing are already locked in competition in exploiting its petro resources. Rakhine State, from where the Rohingya have fled, is where two projects, a Chinese one to exploit the offshore gas resources and an Indian one to develop multimodal transportation linkages, are located.

As for Bangladesh, bordering five Indian states, it is central to the stability and security of our eastern region. India has important soft-power assets in Bangladesh and once developed, its waterways, highways and railroads will reduce our vulnerabilities arising from the Siliguri Corridor. As part of its larger strategy of outreach to South Asia, China, which is already a major supplier of weapons to Bangladesh, is making a powerful bid to establish itself as an investor in the country. The arrival of Rohingya refugees is posing a huge burden to the country, which has in recent decades taken great strides in the area of improving maternal health and reducing child mortality, and generally improving the quality of life of its poorest people.

But the issue for us is not just what happens in Myanmar and Bangladesh. It is intrinsically linked to the development of the eastern parts of the country, where India meets with Bhutan and Bangladesh on one side and China and Myanmar on the other. It is only in the last decade that the region appeared to be overcoming the hand it was dealt with by history and ethnic demography. Sub-national conflicts were brought under control and there was a distinct uptick in development, based on better inter-state relations and better connectivity.

A brutal campaign of ethnic cleansing has been launched by the Myanmar Army, which continues to send thousands of refugees every day to Bangladesh even as Myanmar refuses access to the region to relief organisations and independent observers. Unresolved, the problem will poison the relationship between Myanmar and Bangladesh. Inevitably, this affects India as well. Both countries are vital for our security, bordering as they do four and five Indian states respectively. The Supreme Court hearing is an indicator of the fact that the issue is already roiling India, and not just ties between Bangladesh and Myanmar.

Bangladesh and Myanmar have, in the past, posed major problems for us. The erstwhile East Pakistan was a major ISI base from which Naga and Mizo separatists were supported. Bangladeshi dictators like Zia-ur-Rehman and H.M. Ershad turned a blind eye to the ISI’s activities against India. The India-Bangladesh relationship has stabilised in Sheikh Hasina’s second term as prime minister beginning 2009. This has led to a general calmness that has helped in the reopening of old land routes connecting Kolkata, Dhaka, Guwahati and Agartala. It has helped shape plans such as the Bangladesh-Bhutan-India-Nepal sub-regional grouping’s Motor Vehicle Agreement, which is equally needed to energise the reopening of borders. India has been exporting oil to Bangladesh through the railway network, but it is also developing pipelines from its own network leading to points in Bangladesh. Plans are also on to develop facilities in Chittagong to import LNG and LPG for use in Bangladesh and the northeast.

Competing with China in Rakhine State

As for Myanmar, India initially made a pragmatic outreach to the military dictatorship with a view of seeking Naypitaw’s cooperation in dealing with insurgents who use Myanmar territory for sanctuary. But thereafter, it has sought to develop economic and trade ties with a view both to push development in its northeast as well as compete with China. While Myanmar decided to allow China to exploit the gas from the Shwe fields which Indian companies helped develop, India went ahead with the Kaladan multi-modal project which has seen the development of a port in Sittwe and the Paletwa inland water transport terminal. In June this year, India handed over six cargo vessels worth $81.29 million to Myanmar in Sittwe which will ferry containers from Kolkata and Paradip to the road segment linking Paletwa to Zorinpui in India’s Mizoram state which is nearing completion.

In 2008, India lost the bid to use the Shwe gas which would have been piped through a pipeline passing through Bangladesh; instead the Chinese were allowed to use the gas which is now being piped to Kunming through a pipeline from Kyakupu. One reason for this was the Khaleda Zia government’s refusal to participate in the project. This was a textbook example of the sensitive geopolitics of the region and the zero-sum nature of the ties we have. However, since then, there have been periodic efforts to revive trilateral cooperation that would lead to oil and gas exploration in Myanmar and Bangladesh, refining and processing it, and transporting it to India.

But India has bigger plans in its relationship with Myanmar, some even involving cooperation with China. Already, it is at work in building the India-Myanmar-Thailand trilateral highway which will go from Moreh in Manipur to Mae Sot in Thailand across Myanmar. There is a proposal to extend it to Cambodia, Laos and Vietnam as well. This will intersect with the Chinese highway linking Kunming to Mandalay. There is, of course, the Bangladesh-China-India-Myanmar scheme which promises road and rail linkages between these countries. But this is currently on the back burner because of the poor relations between India and China.

The Rakhine area from which the Rohingya are being expelled is a major focus of Indian and Chinese competition. The Chinese oil and gas pipeline to Kunming originates at Kyaukpyu and they have offered to take an 85% stake in the port to develop it further. The Myanmarese had offered 50% but the Chinese company CITIC rejected the offer. Linked to the port is the second Chinese-led scheme of a $10 billion Special Economic Zone. A little to the north, India, which has developed the Sittwe port as part of the Kaladan project, has announced plans to set up a Special Economic Zone nearby as well.

Also read: ‘The Frictions in the Rakhine State Are Less About Islamophobia Than Rohingya-Phobia’

But all this will be held hostage by the current developments in Rakhine State, where Sittwe and Kyaukpyu are located. While China, which barely notes human rights issues in other states, has little problem with Myanmar, India could find itself in a difficult place, especially since some Rohingya have already found refuge in the country and more could surface in the coming years.

A greater danger is a potential Myanmar-Bangladesh armed conflict. This would pose a huge diplomatic quandary for India for the reason that while Myanmar is important for the security of the northeastern region and our eastern connectivity, Bangladesh is much more central for our security, not just in the northeast, but vis-à-vis China in the north as well.

The way out is for New Delhi to assume a more forward policy to head off such an eventuality. Instead of focusing its effort on expelling some poor refugees, it would be better off in ensuring that they do not become refugees in the first place or helping create conditions for their safe return. This requires active and value-based diplomacy, which New Delhi seems to have shunned in recent years in the belief that it gives an advantage to the Chinese. But the Bangladesh-Myanmar situation affects us more directly than it does China, so we simply do not have the option of sitting on our hands. We stand to lose not just our good name, but the opportunity of aiding the transformation of a vast region that is wracked by ethnic strife, poverty and backwardness.