New Delhi: Even as India hired a second lobbying firm, the country’s troubles on Capitol Hill show no sign of ending with a new resolution introduced in US Congress urging it to lift the communications clampdown, release political detainees and preserve religious freedom in Kashmir expected to pass.

The resolution, introduced in the house on December 6 by the first Indian American congresswoman, Pramila Jayapal, has been co-sponsored by Republican house representative Steve Watkins from Kansas. New Delhi hopes the resolution will be undermined by some of the controversies surrounding Watkins – of unwanted sexual advances and exaggerated claims about his past.

This is the second resolution on Kashmir introduced in three weeks. Earlier on November 22, Rashida Talib introduced a resolution “condemning the human rights violations taking place in Jammu and Kashmir and supporting Kashmiri self-determination”. Till Saturday, the Congress’ online database did not show any additional co-sponsors for Talib’s H.Res. 724.

Jayapal’s initiative is more serious as it has bipartisan backing from Watkins. The text of the resolution, which was uploaded on Friday, also avoids taking a stand on the wider question of the Union Territory’s status: there is no reference to Kashmir being a dispute, nor does it wade into the issue of nullification of Article 370.

As the world’s largest democracy, India shares a unique and important relationship with the United States. I’m proud to have lived my own life in the world’s two greatest democracies—as a citizen of India for 35 years, and now as a proud American citizen and member of Congress.

After being introduced in the house on Friday, H.Res. 745 has been referred to the house foreign affairs committee. The congressional panel will consider the resolution and amend the text if required, before it goes to the floor of the house. These non-binding resolutions are supposed to express the sentiment of the legislative branch on a particular issue, ranging from Taiwan to Tibet.

Indian diplomatic sources told The Wire that Jayapal’s resolution is likely to be passed, but with a narrow margin.

However, Talib’s initiative, which has been referred to house foreign affairs subcommittee on Asia, the Pacific and non-proliferation, is not expected to see the light of the day, as per Congressional sources.

Also in departure from Talib’s draft resolution, the text of H.Res 745 includes the Indian government’s stated arguments for its actions in Kashmir. 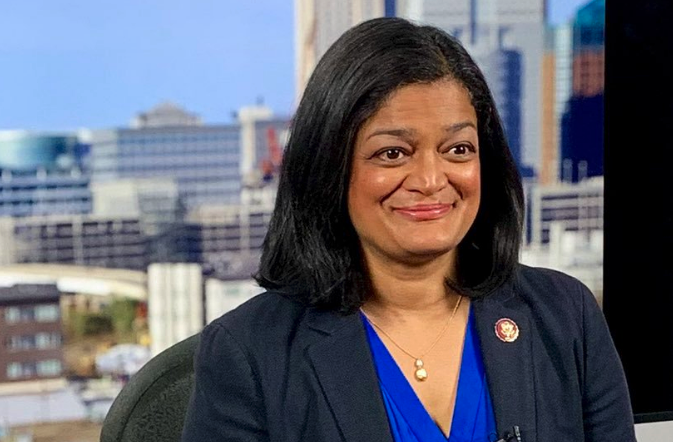 The first point in the operative part of the text states that the House “recognises the dire security challenges faced by the Government and India in Jammu and Kashmir and the continuing threat of state-supported cross-border terrorism”. In the preamble, it noted that the February 2019 Pulwama attack had been carried out by an Indian national, who was a member of “Pakistan-based, United States-designated foreign terrorist organisation”.

However, New Delhi will not be happy with the rest of the language.

The draft resolution states that house “rejects arbitrary detention, use of excessive force against civilians, and suppression of peaceful expression of dissent as proportional responses to security challenges”.

Further, it urges the Indian government to remember there should be respect for human rights and of international humanitarian law in actions taken “in pursuit of legitimate security priorities”.

It also calls on the Government of India to “condemn, at the highest levels, all religiously motivated violence, including that violence which targets against religious minorities”.

Jayapal had earlier in September co-authored a letter to US secretary of State Mike Pompeo, urging him to press India to immediately end the communications blockade in Kashmir and release arrested political leaders.

Jayapal’s introduction of a resolution is certainly not a surprise. She had herself announced that this resolution was in the works during the October hearing of the house foreign affairs sub-committee that focussed on the situation in Kashmir, post August 5.

The Democrat lawmaker, who was born in Chennai, had expressed her concern at arbitrary political detentions. “I just hope that we will make a very strong statement on the detentions and raise it at the highest level. This is unacceptable and we hope to bring a bipartisan resolution on that,” she had said on October 23.

Jayapal had specifically mentioned the case of Mubeen Shah, former head of the Jammu and Kashmir Chamber of Commerce. She had furnished a letter from Shah’s urologist about his deteriorating medical condition. Mubeen Shah’s son, Mujahid Shah, was also present during the hearing and was acknowledged by Jayapal.

PTI reported on Saturday that Mubeen Shah, who was detained under the Public Safety Act, had been “temporarily released” for three months.

The October hearing had probably been a turning point, as one US lawmaker after another, nearly all Democrats, were highly critical about the restrictions on Kashmiris and the lack of access to foreign observers.

Faced with a possible tumultuous period in the US congress, the Indian embassy has hired another lobbying firm with the hope of having better outreach with Democrats on Capitol Hill

Two filings submitted to the US justice department’s Foreign Agents Registration Act (FARA) last week show that the Indian embassy has entered into a contract with Washington-based Cornerstone Government Affairs.

The filing, submitted by Cornerstone on December 4, has a copy of the contract signed with the Indian ambassador, Harsh Vardhan Shringla. As per the terms, Cornerstone has been hired for a three-month period from December 1 to Feb 29 for a monthly fee of $40,000 (Rs 28.5 lakh).

Another filing, submitted two days later on December 6, states that Cornerstone has hired Paul DiNino on behalf of the Indian government for the same three-month period. On his LinkedIn profile, Paul DiNino has listed two designations – senior consultant with Cornerstone and President of DiNino associates.

While Cornerstone describes itself as a bipartisan public affairs group, DiNino’s resume has a more marked Democratic slant. He is a former finance director of Democratic National Committee and deputy chief of staff for Democratic senator Harry Reid.

The scope of Cornerstone’s work includes “strategic counsel, tactical planning and government relations assistance on policy matters before the U.S. Government, the U.S. Congress, and select state governments, as well as academic institutions and think-tanks”.

The primary services provided by DeNino for the Indian government is “to develop, coordinate, and implement legislative outreach strategies” and to assist in interaction with the US federal government.

India has traditionally hired two lobbying firms at one time – to reflect the two-party system in US. However, for the last two years, India only had one lobbying firm in town, BGR Government Affairs, which is slanted towards the Republican end of the spectrum.

Previously, the Indian embassy had also contracted the Democrat-aligned Podesta Group, but the firm wound up in November 2017.

The Podesta group had been the target of a cyberattack, which led to a leak of company emails by WikiLeaks in the run-up to the 2016 Presidential elections. Those leaked emails had revealed how John Podesta provided counsel in helping to patch up Ford Foundation’s troubles with the Indian government.

The Indian government certainly felt the need for a more Democrat-centred lobbying effort with the legislative branch slowly turning blue. In fact, while the US administration has been more cautious about censuring India on Kashmir, there has been a rising chorus of critical voices in the US Congress.

In late September, a sub-committee of the Appropriations Committee of the Senate added a reference to the “humanitarian crisis in Kashmir” in its report accompanying a key legislation on annual funding for state department and foreign operations. It had called for India to remove the communication blockade, security restrictions and release detainees.

Thereafter, in early October, the House Foreign Affairs Committee had also called on India to lift restrictions and “afford Kashmiris the same rights and privileges as any other Indian citizen”.

It was followed by the high-profile October 23 Congressional hearing. Less than a month later, US Congress’s Tom Lantos Human Rights Commission held another hearing to look at the situation in Kashmir. Both these hearings did not exactly make India shine in Washington.

These hearings also took place in backdrop of the ‘Howdy Modi’ rally in Houston, which was attended by US President Donald Trump. While some Democrat lawmakers also showed up, Modi’s evocation of ‘Abki baar, Trump sarkar’ was largely perceived as a political endorsement of the US president. While US-India relations always had a bipartisan backing, the ‘Howdy Modi’ rally was seen as a break from the past with its implicit backing for a political candidate.