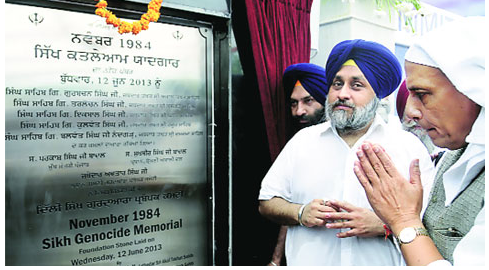 New Delhi: Though the Indian government on Friday rejected a resolution passed by the legislative assembly of Canada’s Ontario province describing the 1984 massacre of Sikhs as ‘genocide,’ the motion’s supporters liberally used quotes of Indian Home minister Rajnath Singh to justify the resolution’s use of the sensitive term.

On April 6, a member of provincial legislative assembly from the ruling Liberal party, Harinder Kaur Malhi introduced a resolution condemning “all forms of communal violence, hatred, hostility, prejudice, racism and intolerance in India and anywhere else in the world, including the 1984 genocide perpetrated against the Sikhs throughout India.” The resolution calls “on all sides to embrace truth and reconciliation”. It was passed by 34 votes in favour and 5 against, with support from all three provincial parties.

Dismissing the motion on Friday, Ministry of External Affairs spokesperson Gopal Baglay said, “We reject this misguided motion which is based on a limited understanding of India, its constitution, society, ethos, rule of law and the judicial process”.

“Our views have been conveyed to the government and political leadership in Canada,” he added.

While the Indian government attacked the resolution for being “misguided”, Malhi and other legislators speaking in favour of the resolution repeatedly quoted the Indian home minister’s description of the 1984 riots as ‘genocide’.

“This motion is one of both not forgetting but honouring, and also of recognising and naming 1984 as a genocide. India’s interior minister, Rajnath Singh, in December 2014, described the events of 1984 and acknowledged them as a genocide, but several persons who had a role in the carnage are not yet punished,” said Malhi in her presentation for the motion.

Thereafter, Todd Smith, a member of the centre-right Progressive Conservatives party also brought up the home minster in his speech. “As to whether the events of 1984 are genocide, I believe India’s current home minister, Rajnath Singh – and I know the member from Brampton-Springdale (Malhi) quoted him earlier – said it better than I could hope to: “It was not riot; it was genocide instead. Hundreds of innocent people were killed. The pain of the kin of riot victims cannot be compensated by even paying crores of rupees,” Smith noted on the floor of the Ontario parliament on Thursday.

Similarly, speaking in favour of the motion, Vic Dhillon, a Liberal MPP (member of provincial parliament) also mentioned Rajnath Singh in his remarks, describing him as “one of the most senior cabinet ministers in India”. Pointing to the 2014 remarks by Singh, Dhillon stated, “That is a very, very powerful statement, coming from a person of his stature”.

Rajnath Singh had publicly pronounced the 1984 anti-Sikh riots as a ‘genocide’ at a function on December 26, 2014 to distribute cheques of compensation in Tilak Vihar, where many of the victims of the massacres continue to reside.

The 1948 Genocide Convention, to which India is a party, defines the crime of genocide in the following terms:

Any of the following acts committed with intent to destroy, in whole or in part, a national, ethnical, racial or religious group, as such:

(a) Killing members of the group;

(b) Causing serious bodily or mental harm to members of the group;

(c) Deliberately inflicting on the group conditions of life calculated to bring about its physical destruction in whole or in part;

(d) Imposing measures intended to prevent births within the group;

(e) Forcibly transferring children of the group to another group.

The violence against the Sikhs took place from October 31 to November 4, 1984 in the wake of Indira Gandhi’s assassination in Delhi, Kanpur, Bokaro and several other north Indian cities. The national capital witnessed the largest massacres. In all, nearly 5,000 Sikhs after killed. Leaders of the ruling Congress party were implicated in the violence and the police facilitated the killing through acts of omission and commission.

The BJP, like other non-Congress political parties, had on previous occasions too described the anti-Sikh killings as ‘genocide’. In January 2014, Congress leader Rahul Gandhi in a TV interview had sought to claim that the 1984 killings were somehow different and less of a crime than the 2002 killings in Gujarat – a claim that human rights activists have challenged.

BJP leaders attacked Rahul Gandhi for trying to minimise the anti-Sikh massacres. “The Gujarat riots were unfortunate but [the] 1984 riots were a genocide. 1984 was a genocide and pre-planned, it was executed by the ruling government,” asserted BJP spokesperson Prakash Javadekar on January 28, 2014. Javadekar is now the union minister for Human Resources Development. 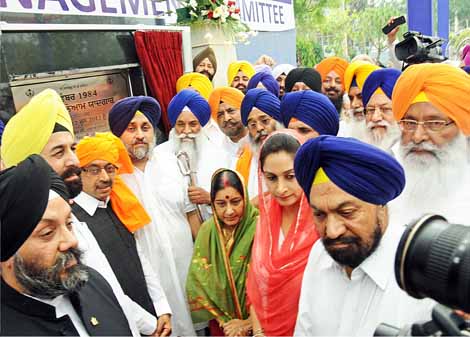 Sushma Swaraj at the foundation stone of the Sikh Genocide Memorial at Gurudwara Rakabganj in New Delhi, 2013. Credit: yespunjab.com

A year earlier in 2013, Sushma Swaraj, who is now the external affairs minister, and Rajnath Singh, had attended the foundation-stone laying ceremony for the “November 1984 Sikh Genocide Memorial” at Gurudwara Rakabganj in Delhi.