Questions We Must Ask About the Pathankot Attack

There is need on the Indian side for the country to get its defensive act in order. 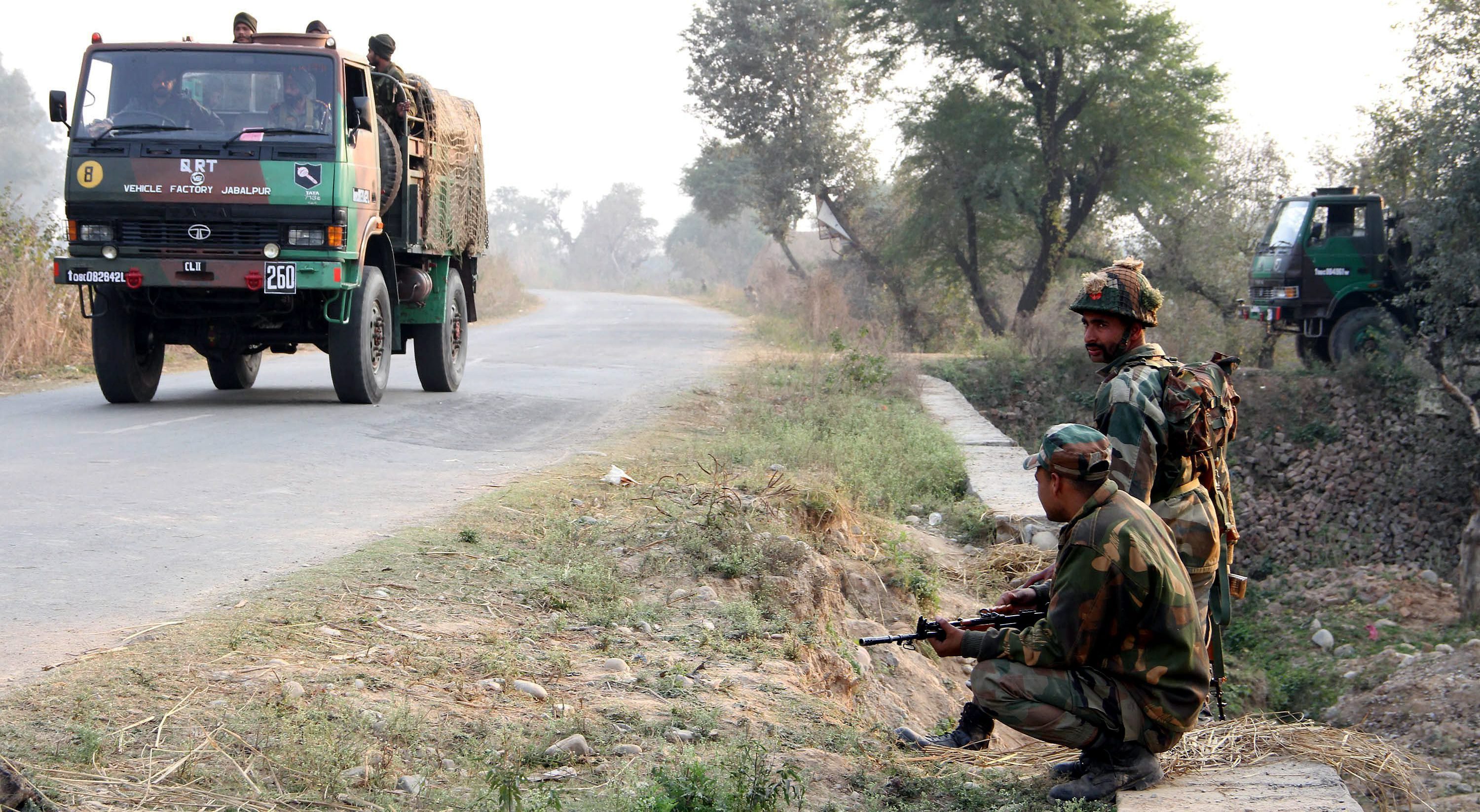 Army soldiers conduct a search operation in a forest area outside the Pathankot air force base in Pathankot on Sunday. Credit: PTI

Some things about the attack on the Pathankot IAF base are obvious. First, something is seriously wrong with our border management in the area. Despite the fencing and presumably heavy patrolling, Pakistani militants seem to get through with surprising ease. This is the fifth attack in the area since September 2013, which follows a near identical pattern. A small group of militants, dressed in army fatigues, crosses the international border in Jammu & Kashmir which runs roughly parallel to National Highway 1A in a south-easterly direction from Jammu to Kathua and then loops south at the Ravi river to Pathankot and Gurdaspur. After crossing the border they hike – and in this case, they apparently summoned a taxi and later hijacked an official vehicle – to get to the highway which is some 10-15 kms away and head for a target, usually a police station, an army camp and in Pathankot, the airbase.

This is heavily serrated riverine terrain which is not easy to police, but surely by now India should have gotten its act together. It is not clear whether the Border Security Force has thermal imagers in the area; they do have low light TV surveillance equipment, but it is often unserviceable.

Second, the attack is almost certainly instigated by elements of the deep state, which means the Inter Services Intelligence (ISI) directorate of the Pakistan Army. Five or six armed men cannot simply walk through the heavy Pakistani defences in an area which formed part of a major military thrust by India in the 1971 war.

The third issue is the poor quality of the policing in Punjab. Despite the July 2015 attack on the Dinanagar police station, very near to the point where Punjab Police SP Salwinder Singh was abducted, the police response was worse than flat-footed. They took anywhere between 12-14 hours to come to the conclusion that their SP’s account of his abduction meant that a serious national security emergency was on hand.

Whatever scattered accounts of the incident we have been getting indicates that its handling, too, has been flawed, if not downright shoddy.

Government officials themselves admit that they had enough advance information of a possible attack. Punjab police chief Suresh Arora acknowledged that the presence of the militants had been confirmed by Friday And thereafter 168 NSG commandos led by Maj-Gen Dushyant Singh had been flown in from New Delhi.

There were also reports that two columns of the Army, roughly 260 men, had also been sent in along with the Punjab Police SWAT team. Yet, even after 35 hours, at the time of writing, the militants have not been eliminated. It is not enough to say that they have been isolated or contained or whatever, because according to the report, they also had mortars which can easily cause mayhem in a half-kilometre range.

There are many unanswered questions here.

First, why did the terrorists let the SP off, considering he was a senior police officer ?

Second, why were the security forces unable to locate the militants in the 20 hours or so they became aware of their presence?

Third, despite prior intelligence and the presence of the NSG, Air Force commandos, aerial surveillance using thermal imaging, how were the militants able to actually breach the base perimeter defences? Had they already breached the perimeter and were hiding out till they launched their attack on Saturday morning ? Is the perimeter fencing and surveillance upto the mark in the first place. This is an important consideration given the importance of the Pathankot airbase and its proximity to a very active border.

Fourth, why were lower end forces like the Defence Security Corps (DSC), who are mostly retired service personnel, allowed to come in the way of danger when it was clear by Friday evening that highly trained militants were targeting the base which had already received high quality forces like the NSG? According to reports, five of the seven security personnel killed were from the DSC.

Fifth, despite a series of attacks across the international border in this area, why are the security forces unable to effectively seal the border? True, the terrain is a problem, but surely by now, enough technological solutions like motion sensors, thermal imagers and low light TV are available to deal with the problem.

Sixth, did the NSG follow the standard protocol in recovering the body of the militants? I ask this because booby-trapping bodies is standard terrorist tradecraft in such cases and special equipment is supposed to be used to ensure that the body is not wired. Was the NSG sent minus their sophisticated bomb defusing robot ? This may have led to the tragic loss of Lt Col Niranjan.

There are several other issues that will need to be worked out in the coming days. For example, the issue of the number of the militants. If Salwinder Singh’s account is accurate, there were four. Then from where did the two additional militants who were discovered on Sunday come from? Is there another group hanging around somewhere, or was their local connivance?

In sum and substance, the Pathankot incident means that the Pakistan Army is keeping its options open when it comes to the efforts being made by Prime Minister Nawaz Sharif and his Indian counterpart Narendra Modi to normalise relations between the two countries. This too ought to have been expected. Every time efforts are made for normalisation, there is a push-back by forces opposed to it. In that sense, this is an old story in the India-Pakistan relationship.

There is a carefully thought through strategy in the attacks on military or police camps in the border areas of J&K and Punjab. After all, the militants could easily hit civilian targets like bazaars, schools, railway and bus stations, but they don’t. The reason is that while these events do create headlines when they occur, they are quickly forgotten, but mass civilian casualties would generate massive world-wide attention and bring pressure on Pakistan. The goal of the attacks is to keep the Jammu & Kashmir pot simmering, without letting it boil over.

The attack suggests that elements in the Pakistan establishment are out to sabotage the latest Modi-Sharif initiative to de-freeze relations. It would be foolish to play into their hands and stop the process of normalisation. On the other hand, sustained engagement is the only way to neutralise them. That said, there is need on the Indian side for the country to get its defensive act in order. The manner in which the Pathankot attack was handled leaves a lot of unanswered questions about the ability of the security forces –  the police, the BSF and the military – to anticipate challenges and react to them swiftly and decisively.