Russia's role in the war dominated the addresses of the US president and Japan PM. Predictably, Modi did not comment on Ukraine or Russia in his opening remarks. 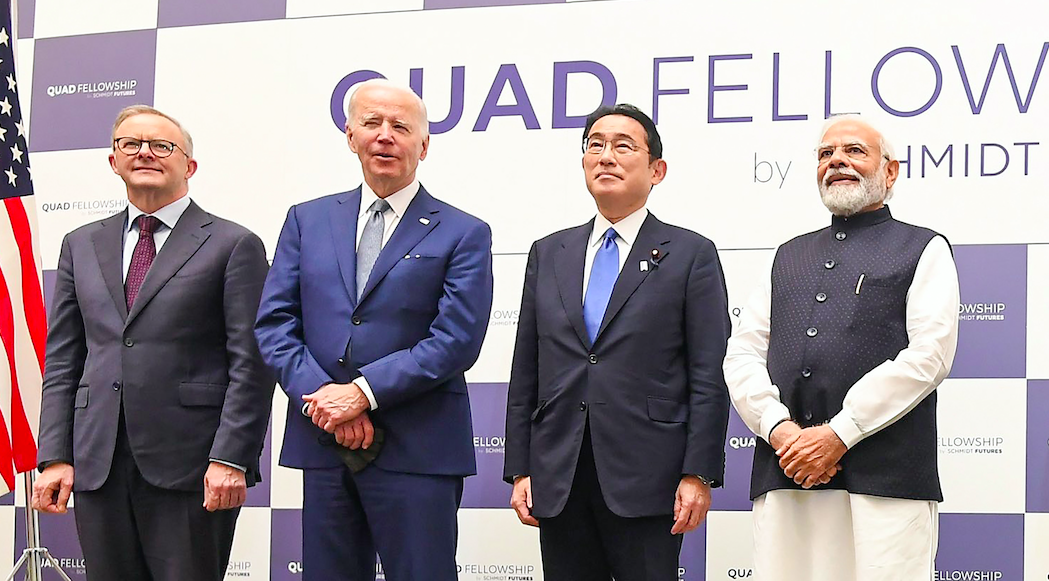 New Delhi: Even as the four Indo-Pacific leaders met and agreed on a new initiative to track ‘dark shipping’ in the region and committed $50 billion for regional infrastructure, the Quad continues to grapple with differences over response to the Ukraine war and implementing its vaccine initiative

In Tokyo, the leaders of India, Australia, Japan and the United States met for their fourth ‘Quad’ summit and their second face-to-face meeting in two years on Tuesday, May 24.

Albanese, who was only elected on Saturday, May 21, came directly after being sworn in as prime minister.

In his opening remarks, US President Joe Biden spoke about the importance of Quad in responding to COVID-19, supply chains, and the new initiatives being launched by the grouping.

But, dominating his remarks was the Ukraine war. “This is more than just a European issue. It’s a global issue,” Biden stated.

Condemning Russia for invading Ukraine and triggering a humanitarian catastrophe, Biden said that the Russian president Vladimir Putin was “trying to extinguish a culture”. “He’s not trying to hit military targets any more, he’s taking out every school, every culture, every natural history museum”.

“Russia’s assault of Ukraine only heightens the importance of those goals of fundamental principles of international order, territorial integrity and sovereignty. International law, human rights must always be defended regardless of where they’re violated in the world,” he said.

Biden asserted that “as long as Russia continues this war, we are going to be partners and lead a global response”.

The Japanese prime minister noted the Russian invasion “shakes the foundation of international order” and was a direct challenge to the principles of the United Nations.

“We should not allow similar things to happen in the Indo-Pacific region,” he said.

Predictably, Modi did not comment on Ukraine or Russia in his opening remarks. He stated that the Quad had gained a significant place on the world stage in a short time. “We have increased coordination in areas of vaccine delivery, climate action, supply chain resilience, disaster response, economic cooperation and adverse situations arising out of COVID-19 pandemic,” he said.

Prime Minister Narendra Modi with US President Joe Biden, Japanese Prime Minister Fumio Kishida and US Secretary of State Antony Blinken in Tokyo, Japan, on May 23, 2022 at the Indo-Pacific Economic Framework for Prosperity. Photo: Twitter.

He added that cooperation among the Quad countries in various areas contributes to peace and stability in the Indo-Pacific region.

Australia’s Albanese, making his international debut as prime minister, told the group that his priorities were aligned with theirs, and pledged to invest more in the battle against climate change in a region in which South Pacific island nations face some of the most direct risks from rising seas.

“The region is looking to us to work with them and to lead by example,” he said.

“That’s why my government will take ambitious action on climate change and increase our support to partners in the region as they work to address it, including with new finance.”

India’s silence in condemning Russia has led to the US administration facing questions about the efficacy of the Quad. India has abstained on all resolutions against Russia in the United Nations and its various bodies. It has condemned the civilian killings in Bucha and called for an independent inquiry but has not explicitly targeted Russia’s role as perpetrator, unlike other Quad members.

On India’s stand on Ukraine, a US official said Biden would seek out commonalities, emphasising the importance of a face-to-face meeting.

“It’s true with all the members of quad there are some differences, the question is how they’re addressed and how they’re managed,” the official said in a briefing to reporters before the talks.

He said that Biden considered face-to-face meetings like the Quad summit as the ideal way to have “candid and direct conversations of the kind that really can only happen when leaders meet and are able to see each other in person and speak their minds”.

“And I think that the President is very aware that India has its own history, its own views, and that, you know, at the same time, having these kinds of conversation helps him to understand the Indian perspective and, I think, allows India and Prime Minister Modi to understand his own perspective and to look for areas of common ground,” added the US official.

The joint statement did not directly name Russia, but only mentioned the “tragic conflict” in Ukraine.

“With the COVID-19 pandemic still inflicting human and economic pain around the world, tendencies for unilateral actions among states and a tragic conflict raging in Ukraine, we are steadfast,” it said.

Further, it noted that the four leaders were against “any unilateral attempt to change the status quo”. “We reaffirm our resolve to uphold the international rules-based order where countries are free from all forms of military, economic and political coercion,” added the joint statement.

As per Kyodo News, Japanese prime minister Kishida told reporters that the Quad countries had come together to send a message to the world that they would “not tolerate a unilateral change of status quo by force in any region”.

The Japanese news agency also noted that the absence of any mention of Russia or any direct condemnation of the Ukraine crisis was in “apparent consideration of India’s neutral position”.

There was another reference to opposition to change in the status quo, specifically in the context of tensions in the East and South China seas, where China has been aggressively pushing its claims.

“We strongly oppose any coercive, provocative or unilateral actions that seek to change the status quo and increase tensions in the area, such as the militarisation of disputed features, the dangerous use of coast guard vessels and maritime militia, and efforts to disrupt other countries’ offshore resource exploitation activities,” it said. This was probably the most robust language used by Quad to condemn China’s actions in the region.

In a sign of the times, Japan on Tuesday scrambled jets after Russian and Chinese warplanes conducted a joint patrol near its airspace. “We believe the fact that this action was taken during the Quad summit makes it more provocative than in the past,” said Japanese defence minister Nobuo Kishi.

During a separate press conference, Indian foreign secretary, however, declined to reply to a question about Japan’s claims about ‘provocations’ by both Moscow and Beijing during the Quad summit.

The Quad joint statement also announced that the Quad “will seek to extend more than 50 billion USD of infrastructure assistance and investment in the Indo-Pacific, over the next five years”.

Kwatra added that leaders, including the Indian PM, emphasised that infrastructure development had to be done in a way that “does not result in an unsustainable bouquet of projects”. He noted that the quantity of $50 billion is a “projected figure”, with the Quad infrastructure initiative to be “demand-driven” to meet the “specific needs” of countries.

Besides, the other two main deliverables from the Quad summit were the announcement of an Indo-Pacific Partnership for Maritime Domain Awareness (IPMDA) and the inauguration of annual STEM scholarships under the Quad fellowship.

As per a White House factsheet, the maritime initiative will “build a faster, wider, and more accurate maritime picture of near-real-time activities in partners’ waters”. “This common operating picture will integrate three critical regions – the Pacific Islands, Southeast Asia, and the Indian Ocean region – in the Indo-Pacific. The benefits of this picture are vast: it will allow tracking of “dark shipping” and other tactical-level activities, such as rendezvous at sea, as well as improve partners’ ability to respond to climate and humanitarian events and to protect their fisheries, which are vital to many Indo-Pacific economies,” it added.

Besides, the four Quad leaders also opened applications for the Quad fellowship, which will annually sponsor 100 American, Australian, Indian, and Japanese students to study in the United States for graduate degrees in science, technology, engineering, and mathematics (STEM) fields.

Over a year ago, the first summit of the four leaders led to a public commitment to manufacturing one billion doses of vaccine by 2022 for distribution in Asia.

The US and Japan were scheduled to contribute to the funding to expand India’s manufacturing capacity. At the same time, Australia would provide logistical support to strengthen access and ‘last-mile’ vaccine delivery in Southeast Asia and the Pacific.

India’s Hyderabad-based Biological E. Limited was to “produce at least 1 billion doses of COVID-19 vaccines by the end of 2022 with Stringent Regulatory Authorisation (SRA) and/or World Health Organization (WHO) Emergency Use Listing (EUL), including the Johnson & Johnson vaccine”.

Until now, the Quad had managed to distribute only a quarter of its commitment – 257 million vaccine doses in the region.

A senior US official claimed that it was still a “significant number” but added that World Health Organization was still to give final approval to the Indian manufacturer. “I think that, you know, that one of the things that the Quad partners are committed to is making sure that doses are safe and effective, and not trying to do anything to try and prejudge the approval process,” he said.

Note: This copy has been updated with details from press conferences by leaders present at the Quad summit and the joint statement released after the summit.