Modi-Johnson Talk Defence, FTA, Even as They Publicly Paper Over Differences on Ukraine

"The leaders expressed in strongest terms their concern about the ongoing conflict and humanitarian situation in Ukraine" and "unequivocally condemned civilian deaths," a joint statement said. 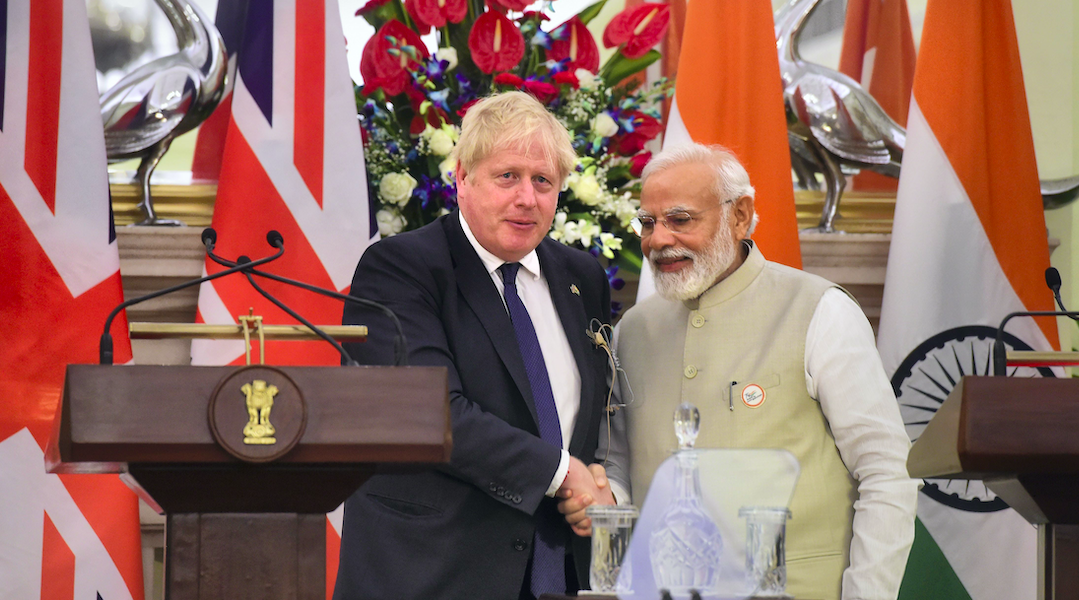 Prime Minister Narendra Modi and British Prime Minister Boris Johnson during the release of the joint statement after their meeting, at Hyderabad House, in New Delhi, Friday, April 22, 2022. Photo: PTI

New Delhi: Prime Minister Narendra Modi and his visiting British counterpart Boris Johnson on Friday held talks to strengthen their defence partnership and announced a deadline of October to complete a Free Trade Agreement (FTA), even as they engaged in a delicate dance to project a united front on Ukraine war, despite their differing relations with Russia.

On the last day of his visit, Johnson held delegation-level talks with his Indian counterpart in New Delhi, followed by a signing ceremony and a joint media appearance.

“We stressed on dialogue and diplomacy for an immediate ceasefire and resolution of the problem in Ukraine. We also reiterated the importance of respect for the territorial integrity and sovereignty of all countries,” Modi said in his statement to the media.

The joint statement noted that the two leaders “expressed in strongest terms their concern about the ongoing conflict and humanitarian situation in Ukraine” and “unequivocally condemned civilian deaths, and reiterated the need for an immediate cessation of hostilities and a peaceful resolution of the conflict, which was having severe implications across the globe, in particular for developing countries”.

Further, the document observed that both sides, “emphasised that the contemporary global order has been built on the UN Charter, international law and respect for sovereignty and territorial integrity of states”. The section related to Ukraine concluded by a reaffirmation of “their willingness to provide humanitarian aid for the people of Ukraine”.

However, the joint statement made no explicit condemnation of Russia, even though the United Kingdom had projected itself as being at the vanguard in Europe of providing material support to Ukraine.

Incidentally, the Times of India reported that UK officials requested India to replace the Russian-built Mi-17 chopper that would ferry Johnson between Gandhinagar and the JCB plant in Halol. India hurriedly brought a 30-seater Chinook from the IAF base in Chandigarh to fly Johnson for the 20-minute ride, said the newspaper.

In the run-up to the visit, diplomatic sources had already indicated that the UK would not be lecturing India on doing more to pressurise Russia.

The Indian foreign secretary, Harsh Vardhan Shringla, stated that there was a discussion on Ukraine, “but there was no pressure in it”.

With the UK media repeatedly questioning why Johnson did not ask India to change tack on Ukraine, the British Prime Minister sought to focus only on the convergences.

Like US secretary of state Anthony Blinken, Johnson also highlighted India’s condemnation of the civilian deaths in Bucha, even though New Delhi had not blamed Russia for the massacre.

He also stated that Modi had “already intervened several times with Putin to ask what on Earth he thinks he is doing and where he thinks this is going”.

Johnson observed that India has a “historic relationship” with Russia, which goes back decades. “The position on Russia that the Indians have is well known. They are not going to change that,” he said.

At the same time, he said Britain and India are being “really encouraged” by “autocratic coercion, whether Russia or China, to do more together”.

Accusing Russia of carrying out “barbarism” in its latest offensive, he said, “the UK and our allies will not watch passively as Putin caries out this onslaught. What we have seen in New Delhi, one of the world’s oldest democracies and world’s largest democracy, sticking together and confronting our shared anxieties about autocracies and autocratic coercion around the world and acting together to make our countries safer and more prosperous”.

A day into Johnson’s visit, British lawmakers triggered an investigation into allegations that he misled parliament in his initial responses to reports that he and his staff broke COVID-19 lockdown rules.

During a separate press conference, Johnson faced a volley of critical questions from the travelling press about the poll numbers showing diminished public trust in the government. There were queries on whether he would remain as prime minister due to the ‘partygate’ scandal, but the Johnson dodged most of them.

Instead, he chose to only focus on what he considered the key takeaways from his India visit – a strengthened defence partnership and a concrete deadline to reach an FTA by year-end.

“So today, we’ve agreed on a new and expanded Defence and Security Partnership, a decades-long commitment that will not only forge tighter bonds between us, but support your goal, Narendra, of ‘Make in India’. The UK is creating an India-specific Open General Export License, reducing bureaucracy and slashing delivering times for defence procurement,” Johnson announced.

In answer to a question on whether transferring defence technology to India could inevitably get leaked to Russia, Johnson noted that the ban on tech transfer to Moscow has been very effective. “So, we will take steps to ensure that stuff does not go through other routes to Russia”.

He also stated that his government was sensitive to Indian concerns about economic fugitives in the UK and the activities of Khalistani groups.

“There are legal technicalities that have made it difficult. We have ordered their extradition… We don’t welcome people who want to use our legal system to evade the law in India,” Johnson said about the delayed extradition of fugitive economic offenders Vijay Mallya and Nirav Modi.

Also read: With Boris Johnson Finally in India, Here’s What to Expect From His Long-Delayed Visit

The British Prime Minister also highlighted that under the Joint Working Group on Counter-Terrorism, a new sub-group on countering extremism had been created to deal with issues like that of Khalistani organisations operating in the UK.

In his media statement, Modi said good progress had been made in negotiations for the India-UK free trade agreement.

My talks with PM @BorisJohnson were wide-ranging and productive. We took stock of the ground covered in the India-UK friendship and also discussed new areas of cooperation. Sectors such as trade, commerce, defence and clean energy figured prominently in our discussions. pic.twitter.com/C8jh5RSRRL

He said both sides emphasised a free, open, inclusive and rules-based order in the Indo-Pacific while reiterating the need for respecting the territorial integrity and sovereignty of all countries.

“We reiterated our support for peaceful, stable and secure Afghanistan,” he said, adding that it is necessary that Afghan territory is not used to spread terrorism in other countries.

In his remarks, Johnson described the ties between India and Britain as “one of defining friendships of our times”.

“I thank my khaas dost Narendra, and the people of India for the grand welcome. I felt like Sachin Tendulkar upon my arrival and also like Amitabh Bachchan when I saw hoardings everywhere,” Johnson said.

“Today, we have agreed on a new and expanded defence and security partnership,” he added.

Johnson said the UK is creating India-specific open general export licensing to reduce delivery times for defence procurement. “We are telling our negotiators to get it done by Diwali in October,” he said on the FTA.

Johnson also spoke on the AstraZeneca-Oxford University ‘Covishield’ COVID-19 vaccine, which was produced by Serum Institute of India. “I’ve the Indian jab in my arm, and it did me good. Many thanks to India,” he said.

“The world faces growing threats from autocratic states which seek to undermine democracy, choke off free and fair trade and trample on sovereignty. The UK’s partnership with India is a beacon in these stormy seas,” Johnson was earlier quoted as having said, by the high commission.

“Our collaboration on the issues that matter to both our countries, from climate change to energy security and defence, is of vital importance as we look to the future,” Johnson said.

Ahead of the talks, the UK had said it will offer India the best of British know-how on building battle-winning aircraft and support the country’s requirements for new technology to respond to threats in the Indian Ocean.

The British prime minister arrived in India on Thursday on a two-day visit in the backdrop of the Russia-Ukraine war.

In a tweet, Johnson had said he was looking forward to meeting Modi, who tweeted similarly in response.

As India celebrates its 75th year of independence, I’m hugely optimistic about the depth of the friendship between our countries, and the security and prosperity it can deliver for our peoples for generations to come.

Wonderful to see you, my friend PM @BorisJohnson in India on a long-awaited visit. Look forward to our discussions today. https://t.co/6gUxR1PwPH pic.twitter.com/z6Ufv8zgAb

Delighted to call on UK PM @BorisJohnson during his India visit.

Discussed our expanding partnership and implementing the #IndiaUK Roadmap 2030. pic.twitter.com/T4RgznvJFE

The India-UK relationship was elevated to a Comprehensive Strategic Partnership during the India-UK virtual summit held between Modi and Johnson in May last year.

At the summit, the two sides adopted a 10-year-roadmap to expand ties in the key areas of trade and economy, defence and security, climate change and people-to-people connections among others.

“Our governments are committing up to £75 million to roll out adaptable clean tech innovations from India to the wider Indo-Pacific and Africa, and working together on international development and girls education,” the UK statement had said.

On the Ukraine crisis, Modi emphasised dialogue and diplomacy to address the problem and called for an immediate ceasefire.