Pakistani Investigators to Get Unprecedented Access at Pathankot Air Force Base 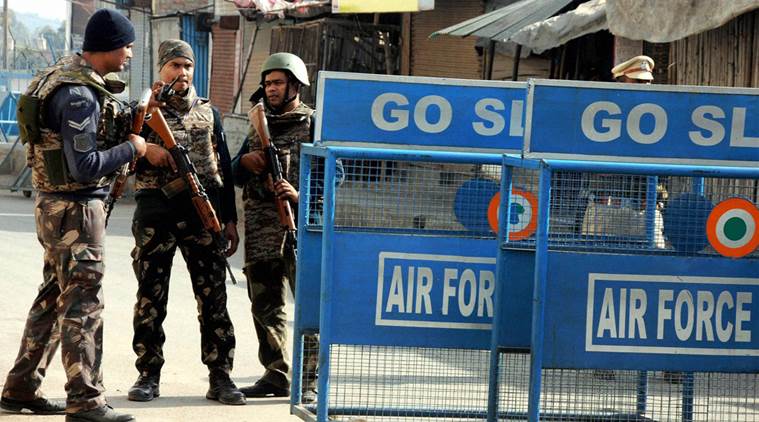 File picture of Pathankot: Air Force base which was attacked by. terrorists in January. Credit: PTI

New Delhi: Pakistan’s Joint Investigation Team will get unprecedented access to a visually barricaded ‘scene of crime’ and examine eyewitnesses at the key forward Indian Air Force base in Pathankot on Tuesday, March 29.

This will be the first time that Pakistani security agencies will be gathering evidence on an attack that took place on Indian soil — one which has been blamed on terror groups from across the border.

Official sources said that the five-member JIT will arrive in India at 11.30 a.m. on Sunday morning. The team will be landing just ten days after Pakistan had proposed the dates during the meeting of foreign ministers in Pokhara, Nepal. With the probe team comprising of Pakistani intelligence officials, the access to an Indian security installation, however limited, is rather remarkable.

Their “work” will begin on Monday morning with a one-and-half hour briefing at the headquarters of NIA, who are the principal investigator of the terror attack which left seven soldiers dead. With official sources claiming “strong evidence” linking Jaish-e-Mohammed to the attack, recordings and visual evidence, including audio claims made on JeM linked websites, will be shown to the Pakistan JIT members.

Their investigations will be part of the case filed on February 18 against unnamed persons on the Pathankot terror attack at Gujranwala, Pakistan, based on “leads” proved by Indian National Security Advisor, Ajit Doval.

After the presentation and subsequent questions and answers on Monday, the team will be flown to Pathankot in a Border Security Force plane on March 29. Officials sources said that the Pakistani investigators will be shown the area where the attacks unfolded from January 2. However, the rest of the Air Force station, which is over 2000 acres, will be visually barricaded.

The Pakistani officials will also be allowed to question only civilian eyewitnesses to the Pathankot attack. These include the Punjab Police’s Superintendent of Police Salvinder Singh, his cook, Madan Gopal and friend, jeweller Rajesh Verma. Their vehicle had been apparently hijacked by the terrorists on the night of December 31 and was used to reach the Air Force station perimeter.

Interestingly, sources noted, Pakistan JIT has still not sent a letter rogatory to India, which is a formal request for examination and collection of evidence or persons for investigation on foreign soil.

After returning to Delhi, the team will have another round of talks with the NIA interlocutors on Wednesday, who have also some questions of their own. An update about the ‘detention’ of Jaish-e-Mohammed chief Masood Azhar will also figure on that list of queries.

The Pakistani officials are scheduled to leave on March 30, just a day before both Indian Prime Minister Narendra Modi and Pakistan PM Nawaz Sharif meet in Washington on the sidelines of the Nuclear Security Summit.

Sources said that India did not want to give any excuses to Pakistan to claim that it did not get the opportunity to collect proof to nab the perpetrators of the attack. With India going to some length to accommodate Pakistan, official sources said that it was also being done with the hope of reciprocity. An NIA team is expected to visit Pakistan later to complete their probe.

Even the arrest in Pakistan of an Indian national for being an alleged ‘RAW agent’ does not seem to have derailed the process set in motion by the National Security Advisors, Ajit Doval and Nasir Khan Janjua who have been in continuous touch with each other after the Pathankot attack. Pakistan had on Friday summoned the Indian High Commissioner to Islamabad, Gautam Bambawale to protest the presence of the so-called “RAW officer” and also what was termed as “subversive activities in Balochistan and Karachi”.

India has accepted that the arrested person, identified as Kulbhushan Jadhav, is a former Indian naval personnel, but added that he had no links to government since his premature retirement. The Indian high commission has sought consular access to Jadhav who is said to be in custody in Islamabad. There is a strong possibility that Jadhav, who operated a cargo business in Iran, had been lured into Pakistani territorial waters and then arrested, said sources. Pakistan has, so far, officially not mentioned his place of arrest.

Earlier on Saturday morning, Pakistan military’s media wing, ISPR had said that the army chief Raheel Sharif had raised the issue of RAW’s activities in Balochistan during his meeting with the Iranian president Hassan Rouhani, who is on an official visit. However, during a press conference at the end of his visit on Saturday evening, Rouhani denied any such discussions.

“Whenever we get closer to Pakistan such rumours (about RAW using Iranian soil) are spread… I have heard this more than 20 times, different times… we didn’t talk about this, of course,” said Rouhani. The Iranian president said that his country had “brotherly ties with Pakistan” and “close relations with India”, and “therefore, there was no problem”.