On Eve of 2 Years of Article 370 Move, Pak Slams India For Not Allowing Visit of Foreign Scribes

In Delhi, the unofficial assessment was that if Pakistan really wanted to offer journalists from India a tour, it could have used other, 'third-country' routes. 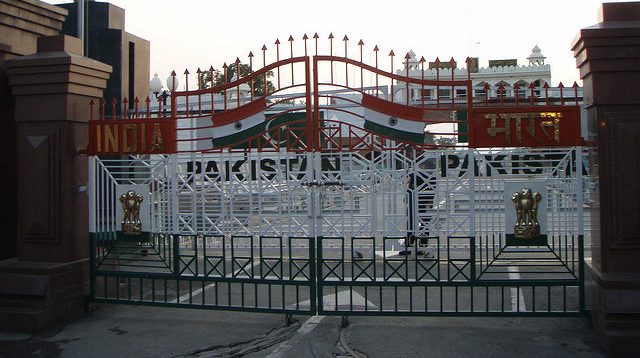 File image of the Wagah Border which has been closed following COVID-19 protocol and through which the journalists were supposed to have gone. Photo: Sheep"R"Us/Flickr CC BY-NC-ND 2.0

New Delhi: Ahead of the two-year anniversary of the reading down of Article 370, Pakistan has criticised India for not allowing Delhi-based foreign journalists to travel through the Wagah border for a sponsored visit that includes a journey to Pakistan Occupied Kashmir’s legislative assembly.

There was no official response from India’s Ministry of Home Affairs, which handles immigration issues. However, sources indicated that the Wagah border was closed following COVID-19 protocol, with the only exception made for ‘diplomats’.

Pakistani foreign minister S.M. Qureshi tweeted that India had denied permission to cross to five international journalists, which is “another damning indication of shrinking space for free speech and independent journalism under a dictatorial regime”.

The denial of permission by India to 5 international journalists to travel to Pakistan, in which a visit to the Azad Kashmir Assembly was scheduled, is another damning indication of shrinking space for free speech and independent journalism under a dictatorial regime.

Qureshi only noted that the journalists were scheduled to travel to an “Azad Kashmir assembly”.

The visit, of course, would have coincided with the second year anniversary of the change in constitutional status of Jammu and Kashmir by reading down Article 370 and bifurcating the erstwhile state into two Union Territories.

Also read: Between the Lines of Pakistan’s Kashmir Rhetoric is an Opening for Diplomacy

Pakistan information minister Fawad Chaudhary tweeted that the journalists would have attended a special assembly on August 5.

India has refused to allow five foreign journalists permission to visit Pak, they were supposed to attend 5th August session of Azad Kashmir Assembly, so much of #FreedomofExpression we want India to allow independent Journalists to visit IOK and let them report facts

NSA Moeed Yusuf stated that India’s actions were that of an “insecure government” which did not want the world to be able to compare the situation between the two parts of Kashmir.

These are actions of an insecure government that has much to hide and doesn’t want the world to see the reality of AJK and contrast it to the open jail that exists in IIOJK under Indian occupation. https://t.co/gmwvLCyt1D

In Delhi, the assessment was that if Pakistan really wanted to offer journalists from India a tour, it could have used other, ‘third-country’ routes.

The input from officials also pointed out that Pakistan had been the first to close down all borders and travel from India. There were also no appetite to help Islamabad score points in time for the Article 370 decision’s anniversary.

A week ago, India had slammed the elections held in Pakistan-occupied Kashmir as an effort to “camouflage its illegal occupation”.

Pakistan’s ruling party, Pakistan Tehreek-e-Insaf had won a simple majority in the 53-member legislative body, whose elections were held in July.

“India has lodged a strong protest with the Pakistani authorities on this cosmetic exercise, which has been protested against and rejected by local people. Such an exercise can neither hide the illegal occupation by Pakistan nor the grave human rights violations, exploitation and denial of freedom to the people in these occupied territories,” MEA spokesperson Arindam Bagchi said.

Pakistan has also planned to inaugurate a new Kashmir Premier League on August 6, which will comprise teams from cities in Pakistan-Occupied Kashmir. India’s cricket association, BCCI, has directed other foreign boards to not allow their players to participate in the tournament. If foreign players do take part in the new league, it would impair their commercial work in India, BCCI instructed, as reported by Indian media.