The Green Party, which is a partner in the coalition, is no friend of undemocratic leaders, though this may not come in the way of greater trade. 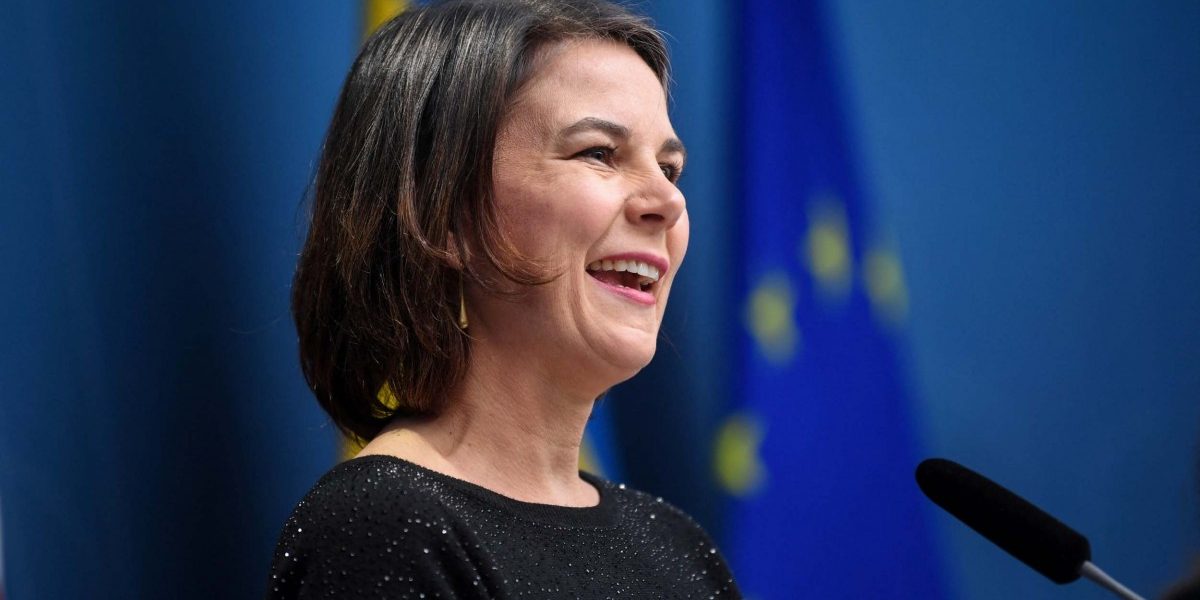 After exactly 16 years and 16 days in office, German Chancellor Angela Merkel stepped down on December 8, 2021, and retired from politics. The new German government is led by Merkel’s former finance minister, Olaf Scholz, who heads a “traffic light coalition” of social democrats, greens and liberals – three rather diverse political parties. Their cooperation is based on a 177-page-long “coalition contract” negotiated over two-and-a-half months and in great secrecy by senior party leaders and overwhelmingly approved by the membership base of each of the three parties.

Not surprisingly, the detailed and somewhat anodyne document is largely consumed with domestic affairs. Already, the election campaign preceding the general election of late September 2021 was dominated by navel-gazing, with little attention being paid to the outside world. Indeed, the still escalating COVID-19 crisis, disputes and public resentment about the large number of confusing vaccination requirements, potential new lockdowns, the tanking economy, spiralling public debts, disconcerting high inflation rates and many other domestic issues need to be taken seriously.

Perhaps this explains why only 28 pages of the “coalition contract” deal with Germany’s future role in Europe and the wider world. Yet one of the most crucial issues at stake in the coming years is Germany’s and indeed the EU’s role in global politics. It is high time for Germany to assume a more relevant role in the world and overcome its well-deserved reputation of thinking and acting like a “geopolitical dwarf”.

Germany and the EU are threatened with being crushed in the economic and geopolitical “great power competition” between the US and China. A smiling Vladimir Putin is ready to take advantage of Germany’s confusion and uncertainty about how to avoid taking sides, while still honouring its traditional closeness to the US.

The New York Times reported that the buzzword for the new German government  will be “continuity”. In fact, we may witness a radical departure of German foreign policy – though perhaps not quite in the way as many may hope.

Who will chart they way?

Germany’s new foreign policy will be overseen by three female politicians. Above all, there is the 40-year-old Annalena Baerbock, one of the Green Party’s top leaders and the first female German foreign minister ever. Then there is the new defence minister, Christine Lamprecht of the SPD, who as a former justice and family minister has plenty of executive experience but no track record in the defence or foreign policy realms. The new minister for economic cooperation and development is the SPD’s Svenja Schulze, who also has plenty of governmental but little, if any, foreign policy involvement.

Still, it will be mostly Baerbock’s and the Green Party’s value-driven foreign policy philosophy that will make a huge difference. Baerbock, however, has no governmental and no foreign policy experience either, and some of her remarks during the televised election debates came across as naïve and ill-informed. Yet she is a fast learner, a quick thinker with an impressive personality and, not least, she represents the zeitgeist (the spirit of the times) in international affairs.

The zeitgeist, it seems, is hardline. Merkel’s tendency to listen, integrate and patiently attempt to find compromises between competing interests is gone. What does this mean in practice?

Baerbock will pursue a foreign policy with a keen eye on making climate protection an important criterion for international deals and financial aid. She and her party, which has a strong pacifist tradition, will also be reluctant to modernise NATO, increase Germany’s defence contribution or agree to German military engagements abroad. They will not hesitate to annoy the large German arms industry by curtailing arms exports. Germany, after all, is the world’s fourth largest weapons exporter.

The new foreign minister can be expected to put a great emphasis on the rule of law and the human rights dimension in international affairs. This will lead to a further hardening of policies toward China and Russia, but also toward countries such as NATO ally Turkey and EU members Hungary and Poland, which have all embraced increasingly autocratic ways of governance.

The Green Party has strongly condemned the Nordstream II pipeline deal with Russia and is appalled by many of Putin’s ruthlessly autocratic policies, including his imprisonment of political opponents, support of Belarus’s inhumane weaponising of migration and Moscow’s escalating destabilisation of Ukraine. 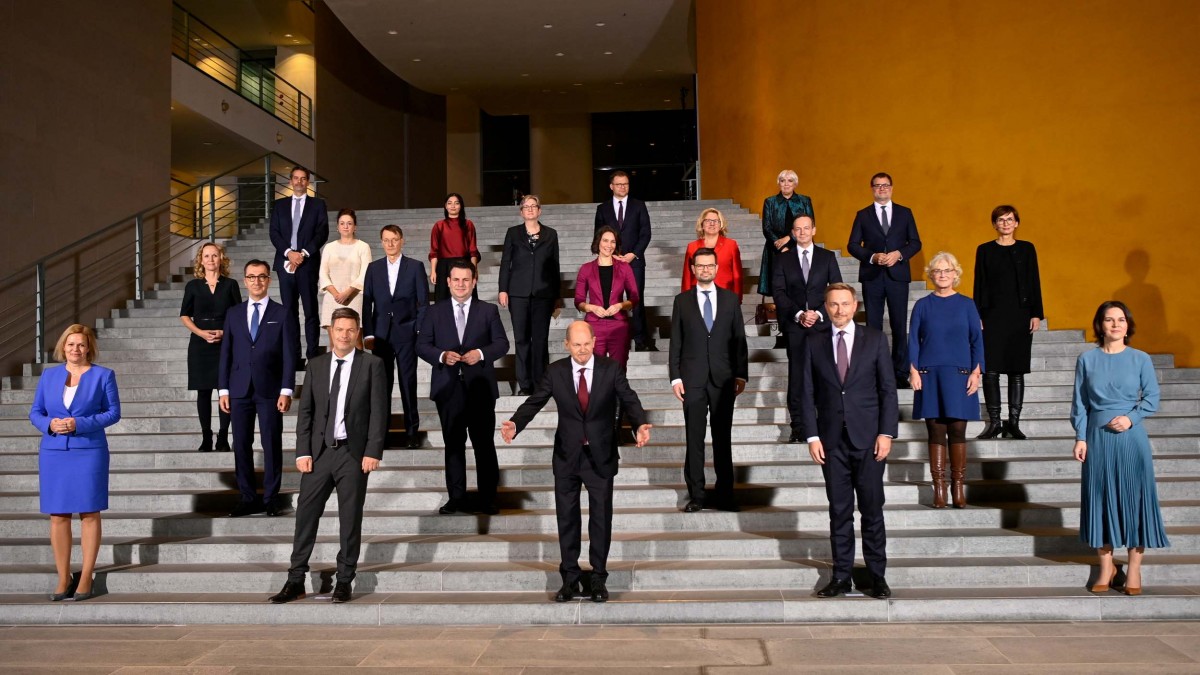 Newly elected German Chancellor Olaf Scholz and his ministers pose for a group photo at the first meeting of the new cabinet at the Chancellery in Berlin, Germany December 8, 2021. Photo: Ina Fassbender/Pool via Reuters/Files

Baerbock and her Green Party are certainly no friends of undemocratic leaders. This will also make the new German government’s relations with the Narendra Modi government in India difficult. In Germany, not least on the political Left, Modi has few friends. Essentially he is seen as an autocratic and overly nationalist politician who has undermined Indian democracy. There was little sympathy for Modi’s closeness to the Donald Trump administration. Trump, after all, was and continues to be a red flag for any self-respecting German politician.

Still, in Berlin, India receives relatively little political attention and it can be expected that German-Indian business and trade links will continue to flourish. After all, Germany is India’s most important trading partner within the EU and ranks sixth on the scale of India’s globally most important trading partners. The new German government is unlikely to implement any substantial changes for Germany’s policy toward India. In fact, new foreign minister Baerbock and not least Svenja Schulze, the new minister for economic cooperation and development, may even attempt to improve German-Indian cooperation in the economic aid area – though not without asking for the improvement of labour and social conditions in India.

The Green Party’s emphasis on human rights will bring it into stark conflict with China. In fact, Baerbock agrees with the European parliament that the EU and Germany should not base their China policy on engagement and economic cooperation but on focusing on human rights and the rule of law. It is thus unlikely that one of Merkel’s major foreign policy achievements with China, the EU’s Comprehensive Agreement on Investment (CAI) of December 2020, will be implemented any time soon. EU parliamentarian Reinhard Bütikofer, a former leader of the German Green Party, is one of the EU parliament’s leading China hawks.

Also read: In Modi-Putin Meet, What Was Omitted from Mutually Agreed On Pacts Is Significant

Baerbock will thus find herself in agreement with the increasingly harsh China and Russia policies of the US, which will undoubtedly please the Joe Biden administration. Yet, many within in the Green Party view the US and its polarised domestic politics, including the potential return of Trump, with great suspicion.

The Biden administration, moreover, has disappointed many in Germany and Europe. Washington’s chaotic and ruthless withdrawal from Afghanistan, the AUKUS deal with Australia and the UK, which sidelined the EU, and also the belated removal of transatlantic travel restrictions and import tariffs, has led to much frustration. And many of Germany’s key companies, not least within the crucially important automobile sector, have made themselves highly dependent on the Chinese market and will do almost anything to avoid annoying the political leadership in Beijing.

Last but not least, according to the German constitution, it is the chancellor who defines the guidelines of German politics, including the country’s foreign policy. It can be expected that not unlike Angela Merkel, Chancellor Scholz will put himself in charge of policy making regarding the most crucial issues and countries. Foreign policy toward the US, China, Russia and the EU will above all be conducted from the chancellor’s office. And as a former finance minister, Scholz is unlikely to overlook the fact that almost 44% of German GDP is based on exports, of which approximately half go to the other EU countries and much of the rest to China and the US.

Klaus W. Larres is the Richard M Krasno Distinguished Professor of History and International Affairs at the University of North Carolina at Chapel Hill.