India and Vietnam signed three agreements on Saturday after the formal discussion between Prime Minister Modi and President Tran. 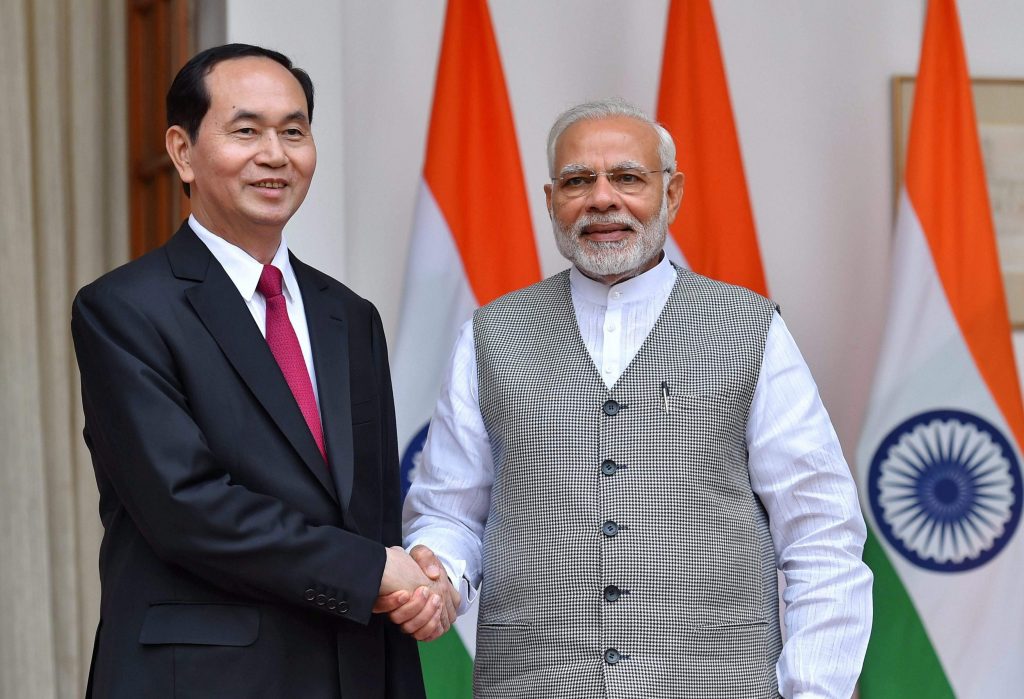 New Delhi: Vietnam President Tran Dai Quang on Sunday (March 4) said that the region’s aspirations would be realised if “Indo-Asia-Pacific” was not “Balkanised” into spheres of influence and there is unimpeded freedom of navigation and trade through its waters.

On the last day of his three-day trip to India, the Vietnam president addressed the tensions over the disputed South China Sea, which has divided the Association of Southeast Asian Nations (ASEAN) down the middle.

“The aspiration [for the Indo-Asia-Pacific century] will come true when all countries join in the effort to protect the freedom of navigation and unimpeded trade and not let the Indo-Asia-Pacific be balkanised into spheres of influence manipulated by power politics, hindered by protectionism, or divided by narrow nationalism,” PTI quoted President Tran as saying.

While the Vietnam president used the hybrid phrase ‘Indo-Asia-Pacific’ in his public remarks, the joint statement issued at the end of the visit did use the term ‘Indo-Pacific’ – a phrase championed by Australia and increasingly used by India and the US to denote the strategic space. China has conspicuously avoided mentioning this concept.

Tran said that India and ASEAN were at the “heart of the Indo-Asia-Pacific”.

The Vietnamese leader said that India deserved a greater role in the region and the world due to its “peaceful development” being a “constructive factor” in regional peace and security.

“Vietnam welcomes India continuing to play her important role in the region,” he said.

Delivering a lecture at Delhi-based India Foundation, Tran said that the region was the “core theatre” of competition for power and influence among the major powers.

He urged countries share a common vision for an open and rule-based region, and a common interest in the maintenance of peace, stability and inclusive prosperity, “wherein no country, no nation and no group shall be left behind”.

Vietnam has been one of the vocal challengers of China’s creeping claims in the South China Sea. However, it has had to step back several times when China, with its superior naval forces and militarised artificial islands, had objected to Vietnam’s oil exploration in the disputed region.

The joint statement stated that Modi and Tran had a ‘convergence of views’ on the “regional security situation in Asia”.

“They reiterated the importance of achieving a peaceful and prosperous Indo-Pacific region where sovereignty and international law, freedom of navigation and overflight, sustainable development and a free, fair and open trade and investment system are respected,” said the bilateral document.

Specifically referring to the maritime dispute, the joint statement said that there was need for “complete compliance with international law, notably the United Nations Convention on the Law of the Sea 1982 (UNCLOS), including the implementation of international legal obligations in good faith, the maintenance of freedom of navigation and over-flight in the South China Sea, full respect for diplomatic and legal processes, peaceful settlement of disputes without resorting to the threat or use of force, and in accordance with international law”.

The Philippines had dragged China to international arbitration under UNCLOS, but Beijing had refused to participate. The judgement had favoured the Philippines, but it was impossible to enforce, especially after the new Filipino government under President Rodrigo Duterte did not show much interest.

Both countries signed three agreements on Saturday after the formal discussion between the Indian Prime Minister and the Vietnamese President.

With defence cooperation described as an “important and effective pillar” of the strategic partnership, they agreed to expedite the implementation of the $100 million line of credit for building of high speed patrol boats for Vietnam border guards. They also “urged” for early signing of a framework agreement on the additional $500 million line of credit for defence industry which was first extended by India in 2016.