With Modi, Xi on the African Trail, China Proposes ‘China-India-Plus One’ Cooperation

In Beijing, the Chinese foreign ministry spokesperson said that China and India should "actively explore China-India plus one or China-India-X cooperation" for their mutual benefit. On Monday, Kagame was at the airport to say farewell to Xi and his wife, only to greet the Indian prime minister an hour later. Both the Chinese and Indian leaders are on an African tour ahead of the BRICS summit in South Africa later this week.

In total, Rwanda signed 23 agreements with India and China over a period of 24 hours.

In Beijing, the Chinese foreign ministry took note of this unusual schedule. At the weekly briefing, spokesperson Geng Shuang said that “China and India” were “like minded partners” in “deepening cooperation in various fields with African countries to achieve mutual benefit and win-win results”.

Advocating Sino-Indian cooperation in third countries and especially in Africa, Geng referred to the ‘informal summit’ between Modi and Xi at Wuhan in April this year. Till now, both countries had only agreed to have joint projects in Afghanistan for capacity building.

India has been working with other countries, specifically the United States, Japan and under IBSA, to develop projects in Africa. But the proposal from China about cooperation in third countries, with Africa as the backdrop, is certainly likely to garner notice.

Xi’s visit to Rwanda, the first by a Chinese head of state, yielded 15 agreements, including one for the construction of a 66-km road to a pilgrimage place, a 55-km highway to Rwanda’s under-construction international airport and the expansion of a Chinese-funded hospital.

According to local media, there was also an agreement on the Belt and Road initiative and another on civil transport.

The latest figure for bilateral trade between India and Rwanda was about $89 million in 2016.

On Monday night, India and Rwanda signed eight agreements in the area of defence, agriculture, trade, dairy-cooperation, culture and leather. Two pacts on lines of credit worth $200 million were signed for  a special economic zone and irrigation scheme.

Both Indian and Chinese leaders also made separate visits to the Gisozi genocide memorial, which commemorates the 1994 genocide by the then majority Hutu government against the Tutsi community.

Modi also visited Rweru Model village outside Kigali to support a personal initiative of President Kagame under the ‘Girinka programme’, a social protection scheme which pushes for ‘one cow, one family’. Modi gifted 200 cows to villagers there who did not own any cattle.

Both the Rwandan president and his Indian guest attended a state banquet, an Indian community reception and a business event together.

President Kagame: Rwanda is keen to learn from the renowned “Make in India” experience, as we implement our own “Made in Rwanda” policy, particularly in the manufacturing, construction and ICT sectors.

At the end of the last joint event, Modi told his host, “I think I can learn how to utilise every minute of the day from President Kagame”. 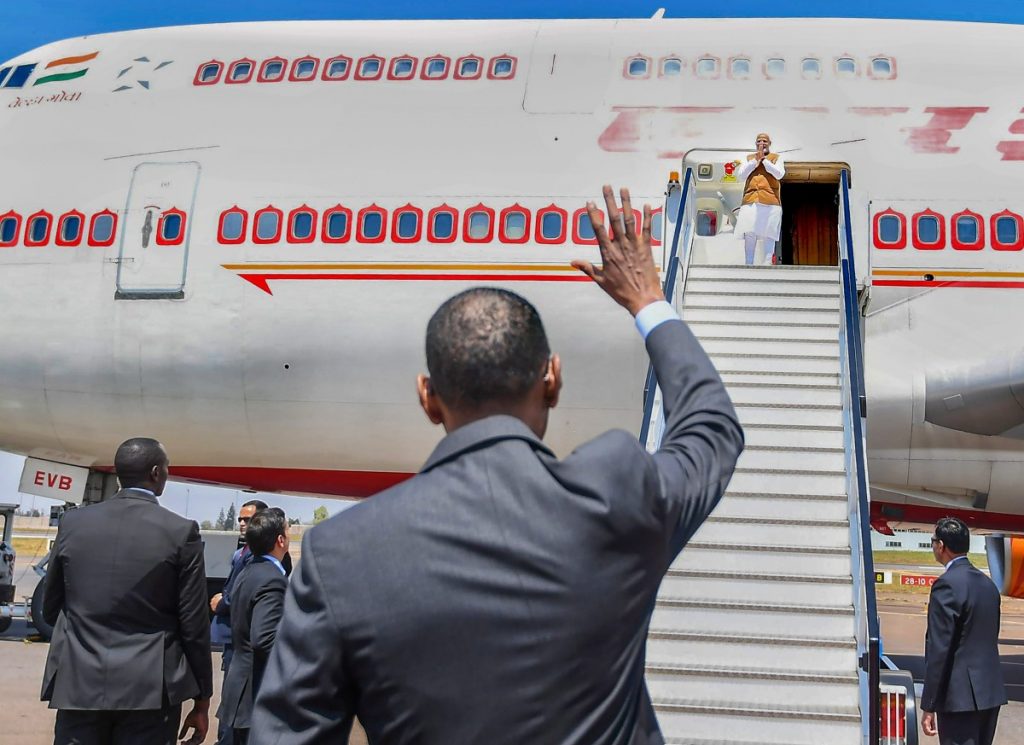 From Rwanda, Modi flew straight to neighbouring Uganda, for the first visit by an Indian prime minister in over two decades. Modi had visited Kampala when he was the chief minister of Gujarat. Uganda has a 30,000 strong Indian community, many of them originally from Gujarat.

After a reception at the State House, President Yoweri Museveni and Prime Minister Modi held delegation level talks. He also announced two lines of credit worth $200 million for power infrastructure and agriculture.

Meanwhile, Chinese President Xi already made his way to South Africa for the BRICS summit at Johannesburg. His last stopover will be Mauritius before returning to China.

Modi and Xi are scheduled to meet on the sidelines of the BRICS summit, which will be their third meeting this year since Wuhan.