Modi described Harris’ election as a “historic event”, which was a “source of inspiration” for people around the world. New Delhi: At her first meeting with the Indian prime minister, US’s first Vice President of Indian origin, Kamala Harris, spoke publicly about the need to strengthen democracies at home and abroad, even as she raised Pakistan’s role in terrorism in Afghanistan behind closed doors.

Harris, who has mixed Indian and Jamaican heritage, was brought up by her mother, Shyamala Gopalan, whose extended family lives in India.

After her historic victory in the presidential elections on Biden’s ticket, she spoke with PM Modi in June this year, when India sought assistance from across the world to tide over the brutal second wave of the COVID-19 pandemic.

Glad to have met @VP @KamalaHarris. Her feat has inspired the entire world. We talked about multiple subjects that will further cement the India-USA friendship, which is based on shared values and cultural linkages. pic.twitter.com/46SvKo2Oxv

At a joint media appearance before the formal talks, Modi told reporters that “India and America are natural partners”. “We have similar values, similar geopolitical interests,” he added.

Modi is currently on a four-day visit to the United States, during which he will take part in the first in-person Quad summit on September 24. He is also scheduled to hold a bilateral meeting with US President Joe Biden on Friday morning.

In her statement, Harris also highlighted their common heritage of democracies but also noted that it was under threat, both abroad and at home.

“As democracies around the world are under threat, it is imperative that we defend democratic principles and institutions within our respective countries and around the world. And that we maintain what we must do to strengthen democracies at home, and it is incumbent on our nations to, of course, protect democracies in the best interests of people of our countries,” she said.

Harris had a run-in previously with the Indian government when she criticised Indian external affairs minister S. Jaishankar for refusing to meet with the House Foreign Affairs Committee over the presence of outspoken Indian-American lawmaker Pramila Jayapal.

However, she has not made any comment on India since joining the White House. However, her niece, Meena Harris, had been vocal in her support for protests by Indian farmers who have been opposing the farm laws.

Prime Minister Modi held the meeting with Vice President Harris at the White House on Thursday. They decided to further cement the Indo-US strategic partnership and discussed global issues of common interest, including threats to democracy, Afghanistan and the Indo-Pacific.

“When the issue of terrorism came up, the vice president suo motu referred to Pakistan’s role in that regard (of terrorism),” he said.

Shringla claimed that Harris spoke about the need for Pakistan to take action on this front so that it won’t turn into security concerns for India and the United States. “She agreed with the prime minister’s briefing on the fact of cross-border terrorism, and the fact that India has been a victim of terrorism for several decades now and on the need to rein in and closely monitor Pakistan’s support for such terrorist groups,” he stated.

According to the MEA press note, the two leaders exchanged views on recent global developments, including in Afghanistan and reaffirmed their commitment towards a free, open and inclusive Indo-Pacific region.

Harris asserted the world is more interconnected and more interdependent than ever before. “And the challenges that we face today have highlighted that fact. COVID-19, climate crisis and the importance of our shared belief in the Indo-Pacific region,” she said. 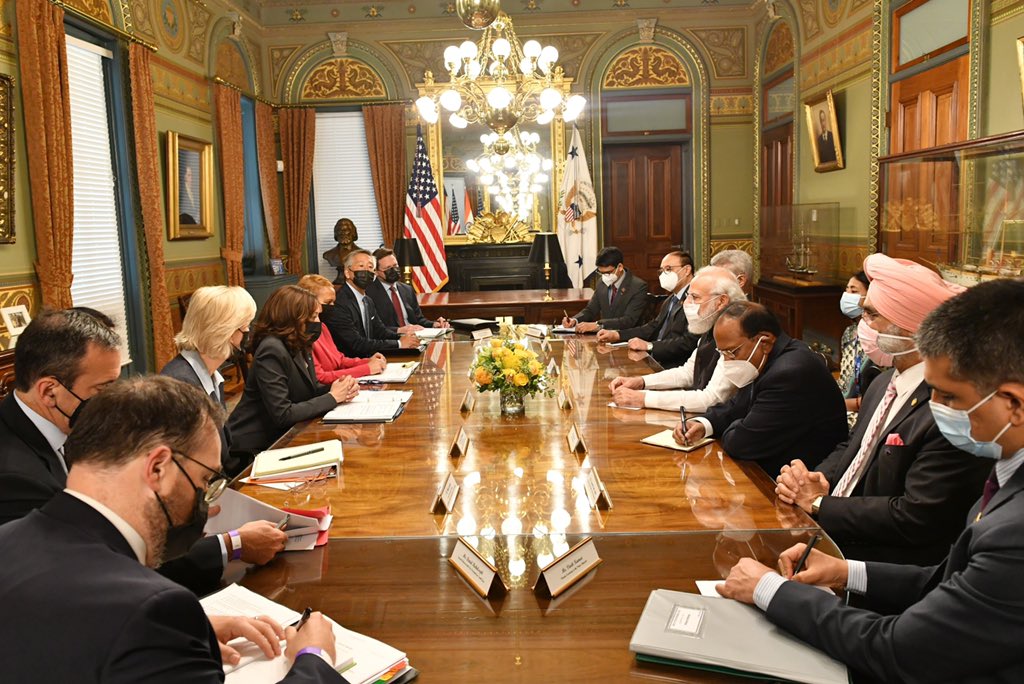 The MEA’s readout noted that both of them “discussed the COVID-19 situation in their respective countries, including ongoing efforts to contain the pandemic through expedited vaccination efforts, and ensuring supply of critical medicines, therapeutics and healthcare equipment”. During the media appearance, Harris had acknowledged that India has decided to resume the export of vaccines, which had been suspended due to India’s domestic needs.

There was also discussion on climate change, space cooperation and sharing of emerging and critical technologies.

“Both leaders acknowledged the vibrant people-to-people linkages as the bedrock of the mutually beneficial education linkages and the flow of knowledge, innovation and talent between our two countries,” said the Indian statement.

Modi described Harris’ election as a “historic event”, which was a “source of inspiration” for people around the world.

“Both President Biden and you assumed office at a time when our planet faced very tough challenges. In a short time, you have had many achievements to your credit, be it COVID-19, climate change or the Quad,” he said.

Recalling their phone conversation, Modi said that Harris had spoken warmly during a crisis in India.

“Like a family, the sense of kinship and so warmly, you extended a helping hand, the words that you chose when you spoke to me, I will always remember that, and I’d like to thank you from the bottom of my heart”.

He also extended a formal invitation to Harris to visit India.