From Howdy Modi to Namaste Trump, Two Leaders Heap Praise on Each Other

“Everybody loves him, but I will tell you this, he is very tough,” US president Donald Trump said of Indian prime minister Narendra Modi. 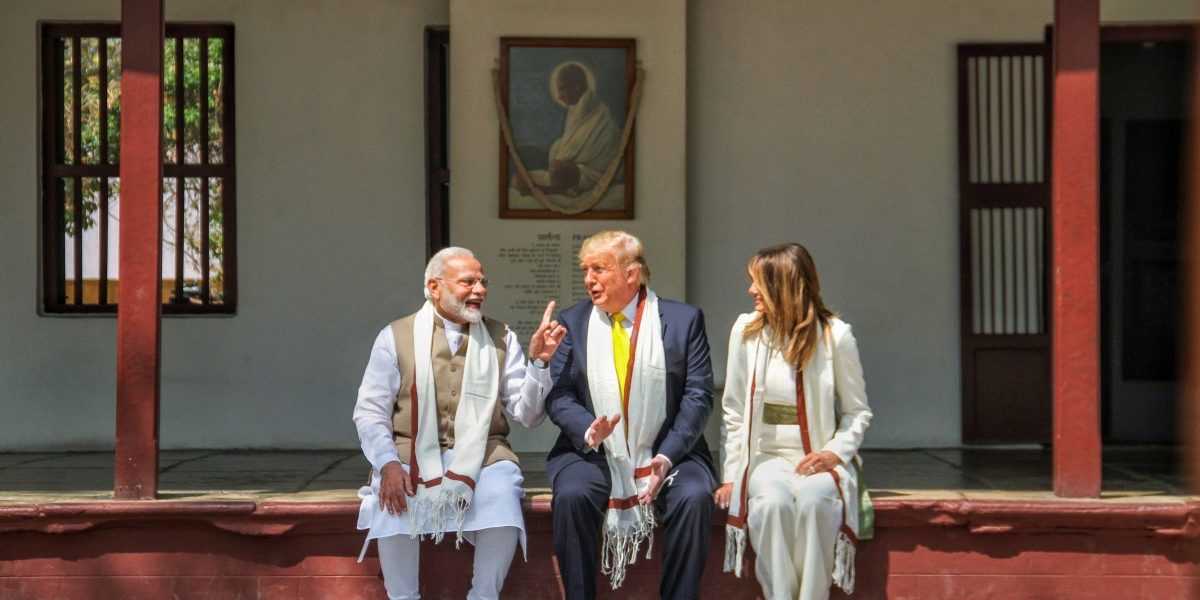 New Delhi: About five months after their joint rally, Indian Prime Minister Narendra Modi and US President Donald Trump spoke extensively on the achievements of their governments and patted each other’s backs as they addressed crowds at the biggest cricket stadium in India.

‘Namaste Trump’ seemed like a reprise of ‘Howdy Modi’, with Trump also hitting the same notes about joint fight against “radical Islamic terrorism”.

As the audience waited for the show to begin, they were regaled to a soundtrack of classic pop hits. The last song belted out by the sound system, just before Trump’s arrival, was ‘Macho Man’ by Village People.

There were loud cheers as Modi escorted Trump and his wife, Melania Trump, into the 110,000-strong stadium.

When Modi began to speak, the audience started to chant his name. He invited the crowd to repeat slogans of ‘Bharat mata ki jai’, ‘Namaste Trump’ and ‘Long live India-US friendship‘.

The US president is in the final year of his first term and has already started his re-election campaign. At 4 million, Indian-Americans are a small part of the US population, but are financially affluent and increasingly politically active.

“There is so much that we share – shared values and ideals, shared spirit of enterprise and innovation, shared opportunities and challenges, shared hopes and aspirations. I am very happy that under the leadership of President Trump, friendship of India and the United States has further deepened and that is why this visit marks a new chapter that will script a new era of progress and prosperity of India and united states,” Modi said.

Modi asserted that Trump “thinks big and what he has done for realising the American dream is well known”.

He also went on to specifically name all the family members accompanying Trump. The First Lady was praised for her programme for “Healthy and Happy America”.

Modi reminded First Daughter, who is also Advisor to President, Ivanka Trump that she had wanted to visit India again after her last visit two years ago for the Global Entrepreneurship summit.

On the son-in-law, Modi said, “Jared, you are known to stay away from the limelight yet what you do is very effective and has a far reaching impact. Whenever you meet, you often mention your Indian friends. I am very happy to meet you again”.

Kushner, who is also senior advisor to President, has been the White House’s key person liaising with Arab governments and crafting the recently unveiled Mideast Peace Plan, which has been rejected by Palestinian leaders. Kushner had an Indian roommate during his college years.

In his own speech, Trump also heaped praise on Modi as a “great champion of India” and “the man who works night and day for India and am proud to call my true friend”.

By referring to the Indian prime minister’s ‘chaiwala’ origin, Trump claimed that the Modi’s life “underscored the limitless promises of this great nation”. “Everybody loves him, but I will tell you this, he is very tough,” he said, as the audience again chanted ‘Modi, Modi’.

Trump said the US first couple have “just travelled 8,000 miles to deliver this message that America loves India, America respects India and America will always be loyal and faithful friend to Indian people”.

Just like Modi had talked about India’s unity and then referred to the ‘Statue of Unity’, Trump also praised the South Asian nation as an “example of unity”.

The US president recounted the “incredible rise” that had multiplied India’s economy six times since independence.

He noted that 275 million people have been lifted out of poverty in the last decade. Trump then said that Modi’s rule had brought electricity to all villages in India and increased access to cooking gas in 70 million households.

He dropped a lot of Indian references from festivals like Holi and Diwali to mention of Bollywood films like ‘DDLJ’ and Sholay, to cricket stars like Sachin Tendulkar and Virat Kohli.

He also praised India’s rise being remarkable for providing freedom to its people, rather than coercion. “There is difference between nations that rises by coercion and one that rises by setting people free”.

“India has always been admired around the Earth as the place where millions upon millions of Hindus and Muslims, Sikhs and Jains, Christians and Jews worship side by side in harmony,” said Trump.

Ahead of the presidential visit, a senior US administration official had said that Trump would raise the issue of freedom of religion in India.

Listing the “sights” of India, Trump mentioned the sacred banks of the Ganga, the Golden Temple and the Jama Masjid, along with the Himalayas and Goa’s beaches.

Later on bilateral ties, he said that the US “should be India’s premier defence partner”, with both together ensuring a “free and open Indo-Pacific region”.

“As we continue to build our defence cooperation, the US looks forward to providing India with some of the best and most feared military equipment on the planet. We make the greatest weapons ever made,” he stated.

To cheers from the crowd, Trump announced that an agreement will be signed on Tuesday to sell $3 billion worth of military helicopters to India. So far, India has procured over $18 billion worth of defence equipment from the US.

He then stated that countries were “united in defending citizens from threat of radical Islamic terrorism”.

“Under my administration, we unleashed the full power of American military on bloodthirsty killers of ISIS. Today ISIS territorial caliphate is 100 percent destroyed. Monster Al Baghdadi is dead.”

Stating that US and India were committed to working together to stop terrorists and their ideology, Modi said that since taking office, his administration was “working in a very positive way with Pakistan to crack down on terror organisations and militants that operate on the Pakistani border”.

Noting that the US’s relationship with Pakistan “was a very good one”, he added, “Thanks to these efforts we are beginning to see signs of big progress with Pakistan and we are hopeful for reduced tensions, greater stability & the future of harmony for all of the nations of South Asia.”

On trade, Trump promised that there was going to be a “very very major – among the biggest ever – trade deals”.

“We are in the early stages of negotiations of an incredible trade agreement,” Trump said, adding that he was “optimistic” of working to reach a “fantastic deal” with the Indian prime minister.

After Trump’s speech, Modi again spoke to thank the US President, in which he again listed the achievements of his government.

While the event began around 1.30 pm, the audience at the stadium had been allowed entry in the early hours of the morning due to security reasons. As the hot afternoon sun beat down, some of the crowd started to leave for the exit, even before Trump had finished his remarks.

The rally ended with the sound system playing Rolling Stones’ ‘You Can’t Always Get What You Want’.

The US presidential cavalcade left the stadium to take the flight to Agra to look at the Taj Mahal.