Concern for religious persecution has made India open its doors to Hindus and other minorities from Pakistan and Bangladesh but not to the Rohingya of Myanmar. Is it because they profess the wrong religion? 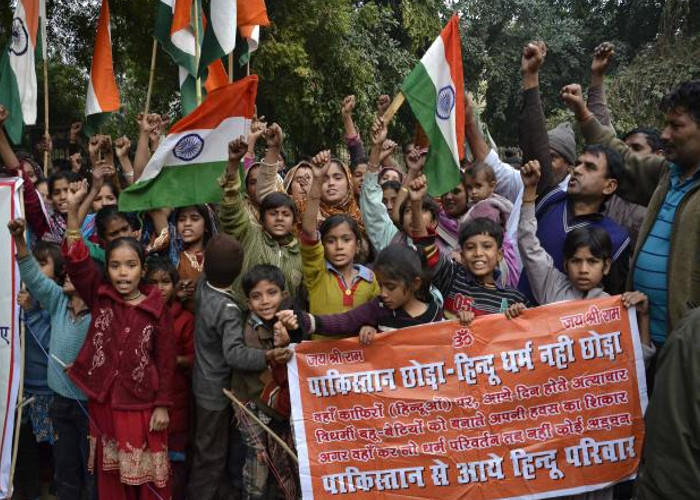 At 7.47 pm on September 7, 2015 – presumably an auspicious muhurtham – the Press Information Bureau issued a release to tell the world that the Narendra Modi government had “decided, on humanitarian considerations, to exempt Bangladeshi and Pakistani nationals belonging to minority communities who have entered into India on or before 31st December, 2014 from the relevant provisions of rules and order made under the Passport (Entry into India) Act, 1920 and the Foreigners Act, 1946, in respect of their entry and stay in India without such documents or after the expiry of those documents, as the case may be”.

The release went on to explain that there were “reports that a number of Bangladeshi and Pakistani nationals belonging to minority communities in those countries, such as Hindus, Sikhs, Christians, Jains, Parsis and Buddhists, were compelled to seek shelter in India due to religious persecution or fear of religious persecution”.

Governments do not take far-reaching decisions on “reports”, unless satisfied that they are true, but the PIB release did not say that the Government of India had vetted these reports and agreed with them. Nor is it at all clear how the government could have made an assessment, when India has no domestic law that defines a refugee or a person seeking asylum, and therefore no yardsticks against which objective decisions can be made – nothing that even remotely compares to the “Qualification Directive” of the EU, which lays down common standards to determine if a person or group seeking asylum is, inter alia, at risk of religious persecution in the country of origin.

There are many problems in Bangladesh and Pakistan, but the organised persecution of religious minorities is not among them. The US State Department’s Country Reports on Human Rights Practices for 2014, for instance, had this to say on Bangladesh:

“Instances of societal violence against religious and ethnic minorities persisted, although many government and civil society leaders claimed these acts had political or economic motivations and should not be attributed wholly to religious beliefs or affiliations.”

On Pakistan, it noted that

“The most significant human rights problems were police and security force abuses, including extrajudicial killings, torture, and rape; widespread corruption that contributed to ineffective responses to crime, including those against women and members of scheduled castes or tribes; and societal violence based on gender, religious affiliation, and caste or tribe.”

There was societal violence against religious minorities in all three countries, but no evidence of systemic religious persecution in any of them.

This is confirmed by Amnesty International’s State of the World’s Human Rights 2014/15, which does not list discrimination against religious minorities as even a worry in Bangladesh, notes that it exists in Pakistan but for all – including those who are Muslim, if they were Shia and Ahmadiyya – and voices concern at communal violence in India.

No concern for Chins, Rohingyas

That being the case, the government needs to tell its citizens more. Why was this decision needed, what are the numbers involved, how many are there from Pakistan and from Bangladesh, what is the break-up between the religions of concern that the PIB cited, and what is the status in law of those now exempt from the Passport (Entry into India) Act, 1920 and the Foreigners Act, 1946? Also, why does this exemption not apply to the Chins of Myanmar, one lakh of whom have sought refuge in Mizoram, or to the Rohingyas? Is it the government’s view that there is no persecution of the minorities in Myanmar?

The US State Department’s report on Myanmar was damning, claiming that the

“Authorities in Rakhine State made no meaningful efforts to help Rohingya and other Muslim minority persons displaced by violence to return to their homes and continued to enforce draconian restrictions on their movement… more than 140,000 internally displaced persons (IDPs) remained interned in camps, which further entrenched the segregation of the Rohingya and Rakhine communities and left them vulnerable to abuse and extortion in their dealings with authorities. Government security forces allegedly were responsible for cases of extrajudicial killings, arbitrary detentions, torture and mistreatment in detention, and systematic denial of due process and fair trial rights, overwhelmingly perpetrated against Rohingya..”

“The situation of the Rohingya worsened during the year. Individuals suffered persistent discrimination in law and policy, exacerbated by a deepening humanitarian crisis, ongoing eruptions of religious and anti-Muslim violence, and government failures to investigate attacks on Rohingya and other Muslims.”

If this is not religious persecution, what is? But the Government of India’s concern does not extend to them. Why? The suspicion must be that they profess the wrong religion.

The Government might not even be bothered to defend itself. The PIB release does say that the exemptions cover “Sikhs, Christians, Jains, Parsis and Buddhists” from Pakistan and Bangladesh, in addition to Hindus, but how many of these other denominations have in fact sought asylum in India? When I was High Commissioner in Pakistan, there was a small group of Hindus from Sindh which had asked to stay back at the end of their visit to India. No Pakistani Sikh, Christian or Parsi had. It is unlikely that this has changed over the last six years. The number of Pakistanis who want to remain in India is minuscule.

That is not, of course, the case for Bangladesh, where even in the 1980s, when I was Deputy High Commissioner there, we estimated that at least a lakh crossed over each year without documents and melted into our population. There were far more Muslims who came to India than Hindus, and both groups left Bangladesh in search of economic opportunities. The Hindus are a depressed class in Bangladesh, but that is a fact of life for religious minorities throughout the subcontinent. The Sachar Committee’s report on The Social, Economic and Educational Status of the Muslim Community of India made this point tellingly, but we would not thereby concede that they were the victims of organised religious persecution.

It is also the case that the caste system continues among Bangladeshi Muslims, as among their Indian counterparts. The National Commission for Religious and Linguistic Minorities, led by Ranganath Mishra, found that the lowest castes among Indian Muslims shared the disabilities of the Hindu Scheduled Castes, and recommended the same affirmative action for them. In Bangladesh as well, the lowest Muslim castes are landless, hold the most menial jobs, suffer the same discrimination on the basis of caste that the dalit and their Muslim counterparts in India do, share the precarious economic plight of the Bangladeshi Hindus, and leave for India for the same reason. It would be a travesty of justice to exclude them from the amnesty offered by the Government of India, simply because they are Muslim. Article 15 of the Constitution, which prohibits discrimination between citizens on the grounds of religion, should surely also cover those who have sought shelter here.

The Supreme Court should have quite a few things to say on this decision, not least because in its judgement in Assam Sammilita Mahasangha and others vs Union of India and others, delivered on December 17, 2014, it has in effect held that Bangladeshis in Assam are illegal migrants, who have to be found and deported. That judgement was unfortunate, but it binds the government, and there is nothing in it to show that the Central government had sought a special dispensation for Bangladeshi Hindus, on the grounds it has now invoked to thwart the Ccourt’s directive.

Article 14 of the Universal Declaration of Human Rights stipulates that “Everyone has the right to seek and to enjoy in other countries asylum from persecution”, but the government has not argued this before the Supreme Court. Since India is not a party to the Refugee Convention and has not signed the International Convention on the Protection of the Rights of All Migrant Workers and Members of their Families 2003 – which offers some protection even to illegal migrants – the huge numbers of Bangladeshis in India have no legal cover at all.

Nothing in this decision brings credit to the government, but it does bring it many advantages.

Perhaps the court will also ask what has been done to implement the judgment it delivered in January 1996 in National Human Rights Commission vs State Of Arunachal Pradesh & Anr, which directed the government to process the applications for citizenship made by the Chakma refugees from Bangladesh, who entered India in the 1960s, and were sent to camps in Arunachal. However, 50 years after 65,000 sought refuge here, the survivors and their descendants are still stateless; 19 years after the Supreme Court’s judgment, not one application has been processed. That is a cautionary tale. Are the multitudes the government is now allowing to stay on going to remain in limbo, like the Chakmas who came before them?

Nothing in this decision brings credit to the government, but it does bring it many advantages. With the Bihar elections looming, this burnishes its credentials as a champion of Hindu interests. It reinforces its party political bias against Muslims and chips away at the secular cast of India. It permits its leaders to tell the diaspora that they have at one fell swoop settled a problem secular dispensations dithered over, taking Bangladeshi Hindus into the fold and driving the Muslims out. And it can tell the gullible, here and abroad, that it has acted entirely on a humanitarian impulse.

This is a display of the ancient Hindu skill of plastic surgery, proven, as we have been told, by the iconography of Ganesha. Bigotry has been grafted onto expediency, producing a grotesquerie that will appear divine only to the eye of faith. Refugees are the lost patriotism of the swayamsevak.