With Modi in Washington, a Look at What India Can Be Hopeful For

Narendra Modi’s focus should be on establishing good chemistry with Donald Trump, reassuring the latter that India is a reliable partner democracy for the US. 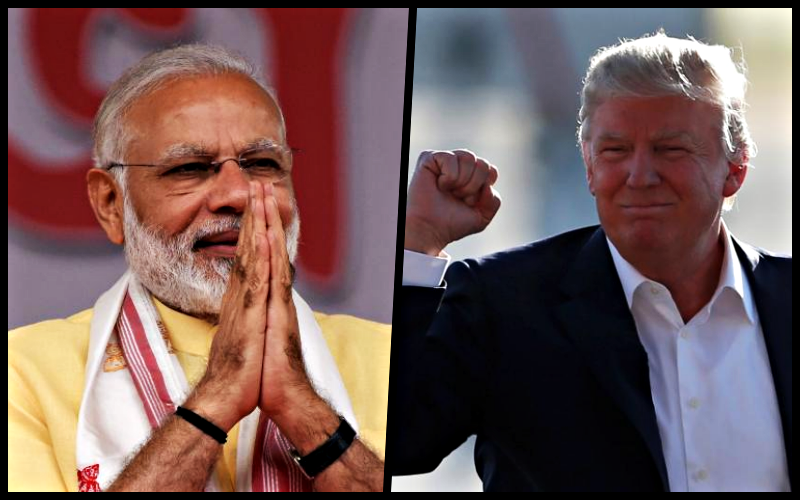 As Modi goes to Washington, he and Trump have much to celebrate, while also working towards progress in the ties between our two democracies. Credit: Reuters

Where does the US fit into the Indian government’s diplomatic strategy is obviously a relevant question to ask on the eve of Prime Minister Narendra Modi’s visit to Washington. A related question is what Modi will be looking to get out of the visit. This second question flows from the pointers established in the answers to the first.

The signals from Delhi are somewhat mixed. Some influential voices outside the government, who are close to the power centre, speak of “uncertainties” in the relationship following the advent of a new administration in Washington. Others within the establishment are somewhat less agitated, underscoring that the Goldilocks soup of the relationship is in a good place, just right, neither too hot nor too cold.

The Modi government clearly views its relationship with the US on the basis of all the highs achieved over the years since 2014. This involves good leadership-level chemistry with the previous US president, Barack Obama, an enhanced defence partnership, clean energy cooperation, high-profile military exercises, maritime cooperation in the Indian Ocean, some American pivoting on the India versus China issues and the great emotional highs involving interactions with the Indian diaspora during Modi’s previous visits. This, then, was high noon.

And this “new best friend” relationship exhibited its importance and vitality in many ways – in its enhanced security component, the openings provided for high-technology access (a field denied to India during the past decades of estrangement) and innovation, greater and more effective counter-terrorism cooperation and information sharing, the natural partnership patterns developed to counter China’s growing influence in the Indian Ocean and the Asia-Pacific involving a cooperative network of like-minded democracies like Japan, India and the US, the de-hyphenation from Pakistan, and the recognition of India as a paramount force for stability, economic growth and development in South Asia.

How to approach the Trump administration

What the Donald Trump administration inherits, therefore, is a relationship with large areas of strategic convergence and in a good state of health. There is not much to suggest that the new president has the intention to engage in a backslide where relations with India are concerned. The broad messages on India emanating from Pennsylvania Avenue are positive. This is so despite the whiff of grapeshot on India in the context of the Paris climate agreement, which the US has quit, or, for that matter, the whole review of H1B visas and quotas for skilled information technology industry workers which occasions anxiety in India. In many ways, experiences over the last few years have also taught India to “get real” about the relationship, understand that there are peaks and valleys that dot the terrain, and this infusion of pragmatism in our outlook should do no harm. Today, there is much greater objectivity about the way opinion and policy makers within the Indian government approach this relationship. “Keep it loose and flexible” could well be the hashtag for these times.

Modi’s focus during this visit should of course be on establishing good chemistry and a cordial understanding with Trump, one that reassures the latter that India is a reliable and dependable partner democracy for the US. India is a pivotal state that can work together with the US for the advancement of common strategic interests in Asia and the Indian Ocean. ‘Making America Great Again’ is not at all in dissonance with India’s rise. US investment in India’s modernisation is good for the Making America Great Again mission because India’s economic growth and political and strategic influence as a natural partner of the US in the world reinforces an American resurgence.

The visit should provide an opportunity for the two leaders to discuss their vision and strategic direction for the relationship over the next decade and its place in the global arena. Growing defence cooperation, and the supply side of this relationship involving equipment purchases, as well as joint research and co-production, can help generate jobs for American workers. There is also scope for intensified dialogue between military establishments and training commands in both countries, as well as putting in place technical provisions for better interoperability in humanitarian assistance and disaster relief situations, and counter-piracy and freedom of navigation operations. Indian willingness to share burdens of security to the extent of our capabilities, that will augment support for US stature and influence in the region of the Asia-Pacific, Afghanistan and the Gulf, will help address issues of trust and confidence that may be raised by an administration that is more transactional in its approach than its predecessors.

Also read: This American Journey Might Be One of Modi’s Most Challenging Yet

This is also an American administration whose definitive direction is bilateral, more ad hoc and less alliance centred. India must take the cue and rise to the challenge. Our aspirations to be a global power must be matched by a conscious reduction in risk aversion on the world stage. There are burdens that India can share on the security front and in this, it can be a natural partner of the US, stepping up collaborative efforts and support for American stature and influence in the wider region as other adversarial forces – whether state or non-state – compete with it.

Transactionalism in itself need not be dismissed pejoratively – every country looks out for its interests and there are no free lunches in international relations, especially today. India subconsciously also does not want its good deeds to go unrequited. (Some advocate that US endorsement and support for India’s entry into the APEC could be a very positive signal to the Indian body politic as an indicator of Trump’s India outlook. However, it can also be argued that APEC’s halcyon days are behind it). And even though US withdrawal from the Paris climate agreement may cast a long shadow on clean energy cooperation projects in the bilateral field (a factor that could in a real sense be addressed by stronger cooperation at the state-to-state, university and business-to-business level between both countries), Indian willingness to buy more shale gas/LNG from the US (provided the latter makes this process smoother and less tied down by trade rules and restrictions) will benefit the US economy, reduce imbalances in bilateral trade and help with more jobs for US workers, besides augmenting India’s energy security.

What would make for a successful visit?

It is important that the visit not be treated as the mother of all visits. The success of the bilateral relationship between India and the US extends beyond official sectors. It is a popular and multi-spectrum enterprise involving people in both our democracies. It is essential that both governments establish a smooth transition to this next phase where levels of mutual trust and confidence, and strategic convergence are increased, and there is an established momentum and sequence of high-level dialogue (including a Trump visit to India without too long a delay).

The foundational ideologies of the Trump administration do not include India. That is a good thing. Target practice (or 3 am tweets) in Washington does not cover India. The prime minister’s visit will be a success if it firstly establishes smooth, unaffected communication and chemistry between him and the American president, if there is a stated willingness by the new US administration to build upon the strategic partnership with India, particularly in defence and security, counter terrorism and in the maritime domain. Likewise, in trade, technology and investment, an emphasis on building ties of mutual benefit in order to help each other equitably will also be a measure of success. A statement of intent to work more closely together in Afghanistan, as well as Indian willingness for some burden sharing to advance stability in the crucial Gulf region, will strike a positive note.

A joint statement is expected from this visit. It will no doubt be mined and dissected for many hidden meanings – but much more than this, if Modi and Trump are able to establish a good comfort level with each other, the gods are bound to smile. And stemming from that, if the new administration in Washington can invest more time and energy in the relationship in the months to come, it would be the best-case scenario. Modi’s visit should not be treated as “just another foreign leader” visiting the White House. The geopolitical foundations of this relationship at the time of an unstable balance of power in the Indo-Asia-Pacific region need revalidation at this juncture.

Ultimately, this is a relationship with many anchors that provide ballast and stability. Congressional ties and continuing support for new bilateral initiatives, trade, investment and business ties, ties between research and educational institutions, state-to-state ties between the provinces, the Indian-American community and the mutually compatible nature of two vibrant democracies make for a solid relationship that is resilient and exuberant. As Modi goes to Washington, he and Trump have much to celebrate, while also working towards progress in the ties between our two democracies.

Nirupama Rao is a former foreign secretary of India and was ambassador to the US. She is currently a Public Policy Fellow at the Wilson Center in Washington DC.