Modi will hold extensive talks with the crown prince on Wednesday and is likely to strongly raise the issue of Pakistan-sponsored terrorism. 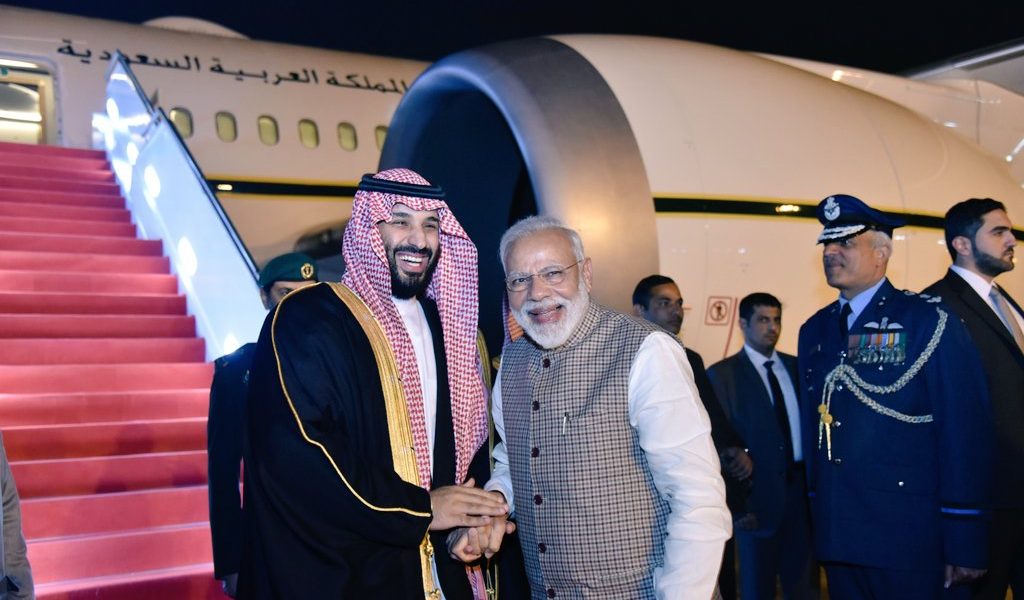 New Delhi: In a special gesture, Prime Minister Narendra Modi on Tuesday received Saudi Arabia’s crown prince Mohammed bin Salman at the airport here, signifying the importance India attaches to the visit by the leader of the powerful Gulf nation.

The crown prince arrived here on a less than 30-hour visit, a day after concluding his high-profile tour of Pakistan, where he said dialogue was the only way to resolve “outstanding issues” between India and Pakistan.

The Saudi leader had returned to Riyadh from Pakistan.

He and Modi will hold extensive talks on Wednesday during which India is likely to strongly raise the issue of Pakistan-sponsored terrorism.

According a warm welcome, Pakistan Prime Minister Imran Khan on Sunday not only received the crown prince at the airport in Islamabad but also drove him to PM house.

During their talks on Wednesday, Modi and Salman are also expected to look at ways to enhancing defence ties, including having a joint naval exercise, official sources said.

According to the Ministry of External Affairs, Salman will leave New Delhi around 11:50 pm on Wednesday.

His visit comes in the backdrop of the escalating tension between India and Pakistan following the Pulwama terror attack carried out by Pakistan-based Jaish-e-Mohammad (JeM) terror group in which 40 CRPF were killed.

In a joint statement, Pakistan and Saudi Arabia on Monday called for avoiding “politicisation” of the UN listing regime at a time when India was stepping up efforts to brand the JeM terror group’s chief Masood Azhar as a global terrorist.

The joint statement said the Saudi Crown Prince stressed that dialogue is the only way to ensure peace and stability in the region to resolve “outstanding issues” between India and Pakistan.

Saudi Arabia’s minister of state for foreign affairs Adel al-Jubeir said in Islamabad Riyadh will try to “de-escalate” tensions between India and Pakistan in the wake of the Pulwama attack.

Official sources said Saudi Arabia was no longer accepting Pakistan’s narrative on Kashmir and cross border terrorism and that India will forcefully raise the issue of Pakistan’s support to terror groups during delegation level talks between Modi and Salman.

They said the joint statement to be issued after talks between the two sides is likely to have strong reference about terrorism and ways to deal with it.

Also Read: In Pulwama, Narendra Modi Has Found the Trigger He Needed Before 2019 Elections

Official sources said there has been a “change” in the way Saudi Arabia looked at relations between India and Pakistan and that the powerful Gulf nation has a better understanding of the cross-border terrorism.

The sources said the two sides are looking at joint exercise between the two navies besides significantly ramping up overall defence cooperation.

Saudi Arabia is also a key pillar of India’s energy security, being a source of 17% or more of crude oil and 32% of LPG requirements of India.

Recently, Saudi ARAMCO in partnership with ADNOC of UAE has agreed to partner in Ratnagiri Refinery and Petro-Chemical project Ltd which is a joint venture of USD 44 billion.

The crown prince is expected to travel to China from India.