Modi Appeals for 'Cessation of Violence' in Call With Putin, First Indian Reaction to Russian Attack

The Indian prime minister also urged “honest and sincere dialogue” between Russia and NATO and said India was concerned about the fate of its national, especially students, in Ukraine. 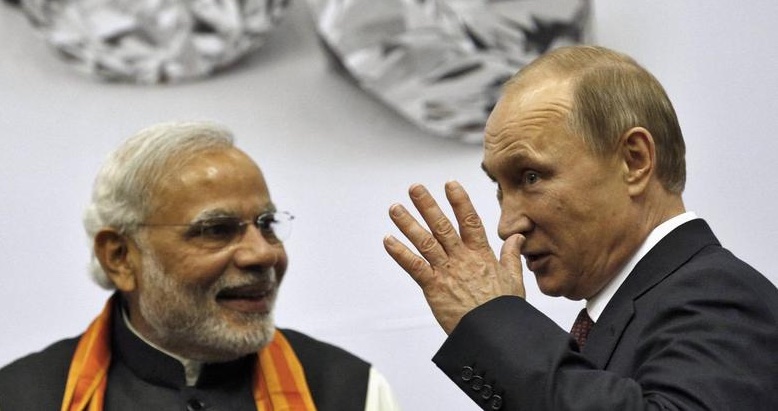 New Delhi: In its first official reaction to Russia’s military assault on Ukraine, India said Prime Minister Narendra Modi told Russian President Vladimir Putin that differences between Moscow and NATO can be resolved through “sincere dialogue” and urged “an immediate cessation of violence”.

Earlier in the day, Russian troops and heavy armour entered Ukraine in what Putin called ‘military operations’, while airstrikes were also reported from several Ukrainian cities.

While many countries around the world have condemned Russia’s actions, India and China are perhaps the only major powers to refrain from taking a stand on the issue.

According to India’s official readout of the call, President Putin briefed Modi about “recent developments regarding Ukraine.”

Prime Minister Modi reiterated “his long-standing conviction that the differences between Russia and the NATO group can only be resolved through honest and sincere dialogue”. He also “appealed for an immediate cessation of violence, and called for concerted efforts from all sides to return to the path of diplomatic negotiations and dialogue”.

The PM raised India’s concerns about the safety of around 15,000 students in Ukraine. With the Russian operation having closed off the airspace to civilian flights, Indian students had become stranded in the east European country.

The Indian government communique stated that India attached the “highest priority to their safe exit and return to India”.

“The leaders agreed that their officials and diplomatic teams would continue to maintain regular contacts on issues of topical interest,” said the statement, presumably a reference to the impending UNSC resolution.

The Kremlin’s account of the conversation made no mention of Modi’s appeal, elaborating, instead, on Russia’s justification of its invasion of Ukraine:

“While discussing the situation around Ukraine, Vladimir Putin outlined the fundamental assessments of Kiev’s aggressive actions against the civilian population of Donbass, as well as its long-lasting destructive policy aimed at scrapping the Minsk agreements. Given these circumstances, and also in connection with the unacceptable for Russia the US’s and its NATO allies’ military developments on the territory of Ukraine, it was decided to launch a special military operation.”

Before Russian troops moved in to Ukraine, European leaders, including French president Emmanuel Macron and German Chancellor Olaf Scholz, had initiated talks with Moscow. Russia had repeatedly asked for assurances from western countries that Ukraine would not be admitted to the transatlantic security alliance, but the US and others refused to provide a guarantee.

Ahead of the Prime Minister’s phone conversation with Putin, foreign secretary Harsh Shringla said India was willing to “facilitate” engagement with all parties. “In all of these (contacts), we have maintained that people need to talk to each other.… if anything we can do to facilitate the engagement, more than happy to do”.

Earlier in the day, he had spoken with the UK foreign secretary Liz Truss and EU high representative for foreign affairs and security, Josep Borrell Fonteles. Later in the evening, Jaishankar began dialling the numbers of Ukraine’s western neighbours – Romania, Hungary and Slovakia – to seek their help in facilitating the transit of Indian students through their borders.

The prime minister had also chaired aa meeting of the cabinet committee on security to “take stock of the situation” in Ukraine, Shringla noted. “PM has conveyed at the CCS meeting that topmost priority is security and safety of Indian nationals, including students”.

Shringla asserted that India has “maintained best of relations with all concerned whether US, Russia or EU”, it was had remained in touch with “all parties”. He added that India had a “lot of stakes” in the region, both as a member of the United Nations Security Council and a large number of its citizens living in the conflict zone.

Earlier in the day, the Ukrainian ambassador to India, Igor Polikha, had expressed “deep dissatisfaction” on India’s position at the developments in Ukraine and urged Prime Minister Modi to tell Putin to reverse his actions.

When asked about Polikha’s remarks, Shringla said that Indian officials had been in touch with their counterparts during the current crisis. “I didn’t see any disappointment as far we are concerned,” he said.

On how India is likely to vote on a forthcoming resolution on Ukraine in the UN Security Council, Shringla said India had seen an early text but was waiting to decide only after its form was finalised. “We are told that will undergo considerable changes… Let’s see what it shapes up (to),” he said, adding that the situation was evolving both on the ground in Ukraine and the Security Council.

Giving more details on the evacuation possibilities of Indian students, he said that Indian officials have already been sent to various land borders of Ukraine’s European neighbours.

He stated that safe routes for Indian nations to reach the land border had already been identified. From Kyiv, it would take about nine hours to reach Poland and 12 hours to the Romanian border, explained Shringla.

Team from Embassy of India in Hungary has been despatched to the border post Zohanyi to coordinate and provide assistance to facilitate exit of Indians from Ukraine. Mission is working with with Govt of Hungary to provide all possible assistance. @IndiainUkraine @MEAIndia contd.

The foreign secretary said that Indian officials have also been asked to cross the border and set up camp offices in western Ukrainian towns of Lyiv and Chernivtsi to facilitate movement.

Defending India’s steps in safeguarding students, he noted that the embassy had “already anticipated” the need to connect to the students and started an online registration over a month ago.

Based on the online registration, the embassy found that there were around 20,000 Indian nationals, including students, in Ukraine.

The first advisory from the embassy was issued on February 15, urging Indian nationals to leave Ukraine temporarily. Five days later, a second advisory was issued.

With the students concerned about their universities continuing to have physical classes, the embassy assured them on February 22 that it  would speak with the authorities to start online classes.

In between, Shringla said, the civil aviation ministry removed the cap of 440 passengers from Ukraine, imposed under the air bubble arrangement. “We ensured that the number of flights was augmented from twice a week to twice a day”. In total, around 4000 Indian nationals had returned through commercial flights before Ukrainian airspace was closed down on Thursday after Russia’s military intervention.

Besides the embassy’s helpline, the control room in MEA had been strengthened with 20 officers manning communication channels. “Just today, we got 980 calls and dealt with 850 emails to the control room”.