Born in the Middle East, having acquired Pakistani nationality, Muhammad Viqar Sharif longs to come back to Hyderabad to his family. But acquiring a long-term visa for someone without money or clout can be quite the ordeal. 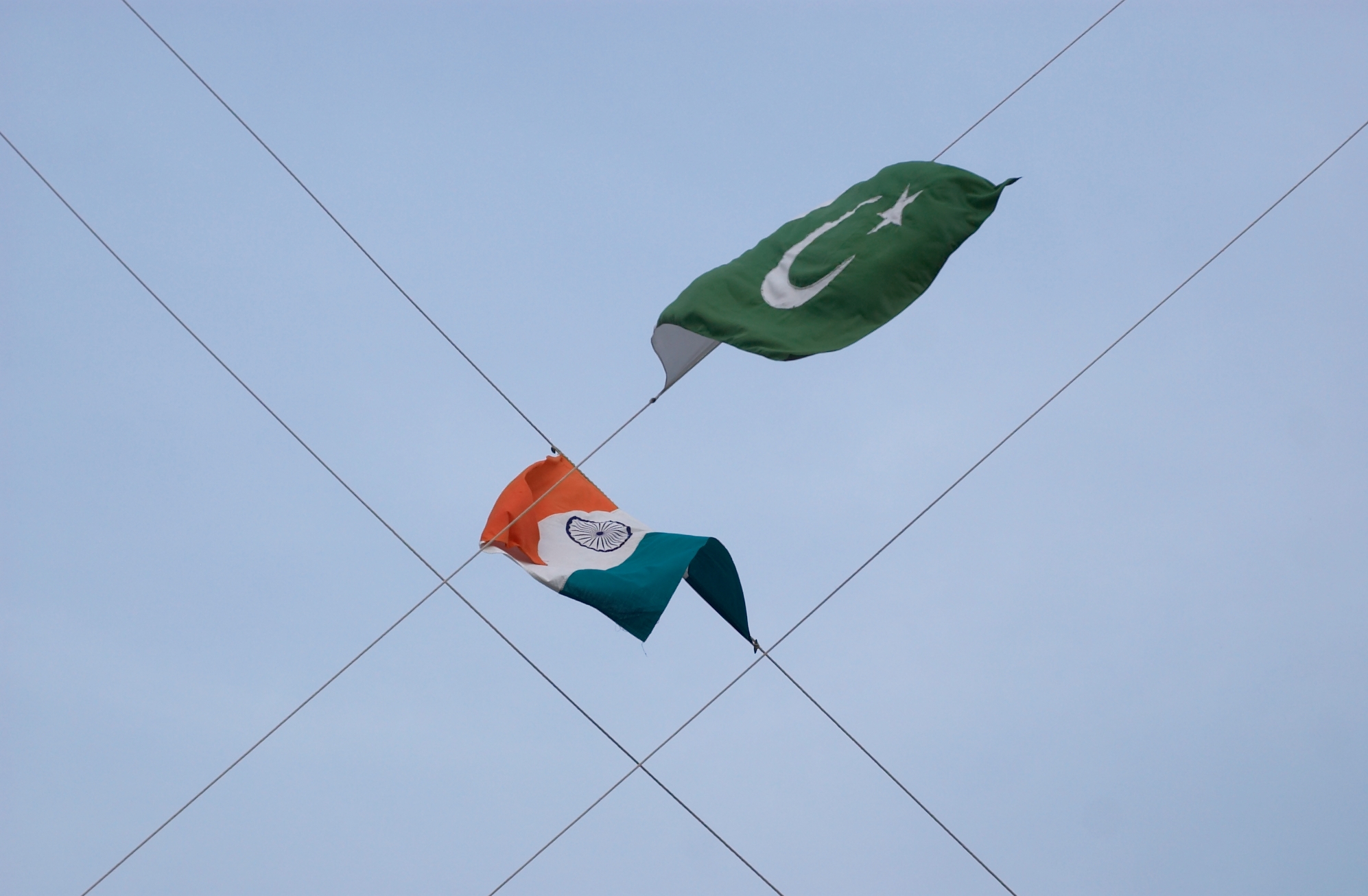 India and Pakistani flags at Wagah. Credit: My Past/Flick CC BY 2.0

In a wonderful gift at the advent of Ramzan, on May 17, the Indian High Commission in Islamabad granted a visit visa to Muhammad Viqar Sharif (47), an accidental Pakistani stuck in a boys’ hostel in Islamabad since February.

His entire family is in Hyderabad, India, including his 74-year-old mother, wife and four children – all Indian citizens. His father and grandparents are buried there. His wife and children have never been to Pakistan. “Pakistan is a beautiful place. All it’s missing is my six family members,” he told me.

His youngest daughter, who is six-years-old, told him she wanted something. When he asked what, her answer was: “You.” But, stuck waiting for his Indian visa or citizenship, having applied for first one, then the other, he couldn’t fulfil her wish.

When he heard the visa had been granted, less than a month after he had applied on April 20, Viqar wept with joy.

The last time he met his family was when he was on a visit visit to Hyderabad towards the end of 2016. In April that year he had sent them back to India after having lost his job in Dubai.

For Viqar, after Bahrain – where he was born and where he grew up – Hyderabad is home. He has been there 17 times since childhood – a total of 850 days, nearly three years – “more than the country of my passport”. The Pakistan visits, 1976-1984, at ages seven, 11 and 13, were family trips for three to seven days each time on the way from India to Bahrain. 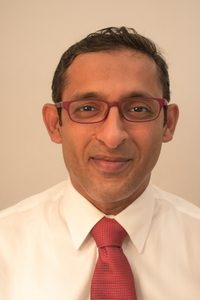 Over the last few years, the three to four month wait for an Indian visa has cost him dearly in terms of time and money each time. With no family, property, or connections in Pakistan he has to stay for extended periods at hotels in Islamabad.

In February, forced back to Pakistan after a job in Saudi Arabia didn’t work out and given India’s unofficial freeze on visas and unsure of how long he’d have to stay, he checked into a boys’ hostel. The monthly rent, PKR 8,000, includes food and WiFi – and a beautiful free view of the Margalla Hills. A good deal for a lonely, jobless man.

Piecing together and verifying his story after he reached out to Aman Ki Asha – the India-Pakistan peace website that I edit – involved processing multiple documents and several voice and video conversations.

This is a tale about a family that, like many others, continues to bear the brunt of a 70-year-old Partition due to ongoing tensions between India and Pakistan. It is also a story about the precarious position of expatriate workers in the Middle East.

Once in India with his family, Viqar should be able to apply for a long-term visa (LTV) leading to citizenship, or approach the court to allow him to stay on compassionate grounds. It is unlikely to be smooth sailing.

Viqar initially tried to apply for Indian citizenship in Dubai in March 2012 but couldn’t complete the process. In Jeddah, February 2017, while looking for work he applied again under Section 5(1)(C) of India’s Citizenship Act, 1955, submitting a set of documents (45 pages) in duplicate for the consulate in Jeddah and for New Delhi, including copies of his mother’s Indian passport, father’s death certificate (born and died in India) and marriage certificate (Indian wife).

But documentary evidence of ties to India is not enough. The consular officer told him that citizenship applicants have to be in India for at least 30 days every year over seven consecutive years to be eligible.

But Viqar is neither rich, famous or well-connected. His current visa to India may be extended, but unless another exception is made, when it ends, he will again be forced into a hotel in Pakistan to wait for another visa.

Back in Hyderabad, his wife has been making up stories to tell the children why he is absent. “Too complicated to explain about visas and all.”

An observant Muslim who wears a headscarf, she says being a Muslim in India isn’t an issue. The problem is with the “P” word. She wants to protect her children from the expected bullying and name-calling if word gets out that their father is a Pakistani.

“I can face anything – after all we haven’t committed a sin – but I don’t want to risk the children having a negative experience,” she tells me over the phone in Hyderabadi Urdu.

But Viqar doesn’t feel Pakistani. For him, the country is not home but a transit station, where he is forced to be in to apply for visas to return to the Gulf – for a job, a prospect that has become more difficult with age – or India.

His first visit to Pakistan as an adult in 1996 set the pattern that has continued. Looking for a job, he was staying with his parents in Bahrain on month-long visit visas, one after another. His brother had left for the UK in 1987, never to return and his sister was studying in college in Bahrain (now married to an Indian, she still lives there). After a point, Bahrain refused further visa extensions.

“My father made a frantic call to a distant relative in Karachi,” recalls Viqar, who ended up in Karachi for nearly four months. He was able to leave when he got a job at Abu Dhabi Airport Duty Free (March 1996-January 2000). Then he moved to Crystal Gallery, a glass and tableware company in Dubai.

Meanwhile, his father A.B. Mahmood Sharif, who had acquired Pakistani citizenship after migrating from Hyderabad to Karachi in 1958, retired from Basrec, Bahrain Ship Repairing and Engineering Co where he had worked for 36 years. Before joining Basrec in 1966, Sharif had returned to Hyderabad to get married; his wife Habeeb Fatima kept her Indian citizenship. Their three children, born in Bahrain, got their father’s nationality. School holidays were spent in Hyderabad – home after Bahrain. Viqar, the middle one, is the only one who still has a Pakistani passport. 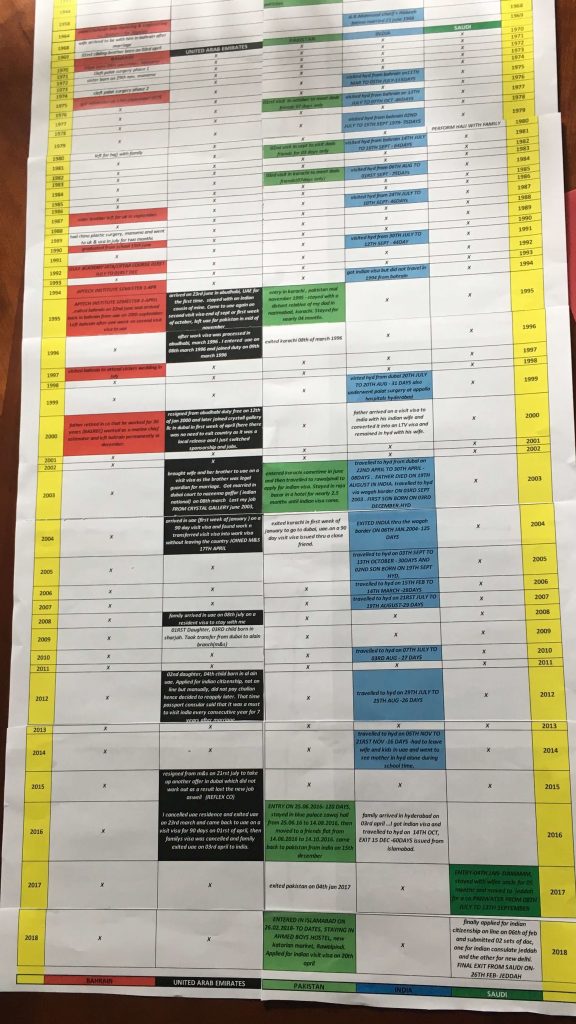 Mahmood Sharif retired with his wife to Hyderabad on a long-term Indian visa. In June 2002, they got Viqar engaged there. The plan was to have the wedding there. But in the aftermath of the Kargil War, that visa remained pending for 11 months.

The engaged couple got to know each other through online chats and phone calls. In March 2003, she traveled to Dubai for a court marriage. His wife, like his mother, retained her Indian nationality. After the visa was granted, they had their post-wedding valima reception in Hyderabad in April.

Such issues force many India-Pakistan cross-border couples, Pyar Border Paar, to live in a third country. However, Viqar’s salary initially placed him in a financial category that did not allow him to bring his wife over except on a visit visa.

In June 2003, Viqar lost his Crystal Gallery job and had to leave UAE for Pakistan – his first visit there in 12 years. His father’s old friends and distant relatives were no more. From a cheap hotel in Rawalpindi, he applied for an India visa as his parents and wife were there.

Meanwhile, in Hyderabad, his father’s health was deteriorating as Viqar, alone in Pakistan, waited for a visa. Mahmood Sharif passed away on August 19, 2003. Viqar was sustained by frequent phone calls to and from Hyderabad, speaking on STD lines at the hotel reception – there was no phone in his room. He finally got a 60-day visa after producing the death certificate.

On September 3, 2003, Viqar crossed into India at Wagah border on the Lahore-Delhi bus, grieving his father’s loss but excited for the birth of his first child, expected in December. In Hyderabad, he applied for a visa extension that he was granted on compassionate grounds.

In November as the visa ended, for once the intransigence of India-Pakistan visitor rules worked in Viqar’s favour. He was able to stay on for an additional month and was present when his son was born – only because there were no seats available on the bus back.

The rules required Indians and Pakistanis visiting the other country to enter and exit from the same point using the same mode of transport (this has since been relaxed to allow entry and exit from different points). The authorities gave him another month’s visa extension.

After that, in early January 2004, he again had to return to Pakistan. Staying at another hotel in Islamabad, he applied for a UAE visa. In April 2004, he joined Marks & Spencer (M&S) in Dubai. His luck seemed to have turned as he began rising up the ranks. In 2008, his finances improved enough to bring his wife over on a resident visa along with their two sons, both born in Hyderabad. With a BEd and MSc background, she began teaching at schools in the cities they lived in. The two younger children, both girls, were born in UAE.

But in July 2015, M&S made Viqar redundant. Unable to find work, in April 2016, he sent his wife and children back to India. There, his wife, teaching math at a high school in Hyderabad, has been managing the job and children on her own.

The family has been split for over two years now. The children miss their father, and he misses them. He is also anxious about his ailing, wheelchair-bound mother, living alone in her new apartment where she has already been robbed thrice.

For ordinary people, even applying for a visit visa to India involves “mountainous problems” to quote Viqar. One of the most difficult conditions is the sponsorship of (No Objection) certificate, quietly introduced to India visa requirements for Pakistani applicants in 2010, mandatory since 2012.

This form must be signed and stamped by “any of the following Indian government officials (DM/SP/SDM/Tehsildar/BDO/SHO/Groups A officer of state and central government/principal of a government college and principal/headmaster of a government school), who will certify that they personally know the Indian sponsor”, says the Indian High Commission in Islamabad.

The officer’s name, rank, posting, cell number and address must be included in the online application. Sometimes “agents” obtain these endorsements for a fee.

Being married to an Indian citizen doesn’t waive the mandatory police reporting within 24 hours of arrival and departure for India-Pakistan visitors. The last time Viqar landed in Hyderabad in October 2016, he arrived exhausted after several delayed flight connections and didn’t report to the police within 24 hours, leading to a fine of $30.

This was after losing the M&S job in Dubai, that forced him back to Pakistan in June 2016 for the first time in over 12 years. Alone and in a hotel again, he applied for an Indian visa. The Indian High Commission called him in twice for interviews. As he exited the Diplomatic Enclave, Pakistani intelligence agents outside grilled him about his family in India.

A 60-day visa in October enabled him to go back to Hyderabad, where his wife’s uncle visiting from Saudi Arabia suggested trying his luck there. Viqar again returned to Pakistan for another hotel stay while waiting for a Saudi visa. He got it in early 2017 when he went to stay with the uncle. One job after another didn’t work out including at a struggling Saudi-owned transportation company that couldn’t pay his salary – they finally settled his arrears on May 7, 2018, sent to his wife in India.

Viqar Sharif is done applying for jobs in Saudi Arabia or the Middle East. All that this nowhere man wants now is to be with his family on a permanent basis in Hyderabad, India. That, he says, is where he belongs. Now that the visit visa has been granted, he hopes this is just a matter of time.