Kulbhushan Jadhav Meets Family, 'Does Not Have to Be the Last Meeting' Says Pakistan

Pakistani and Indian officials confirmed that this was not a "consular access" to Jadhav. 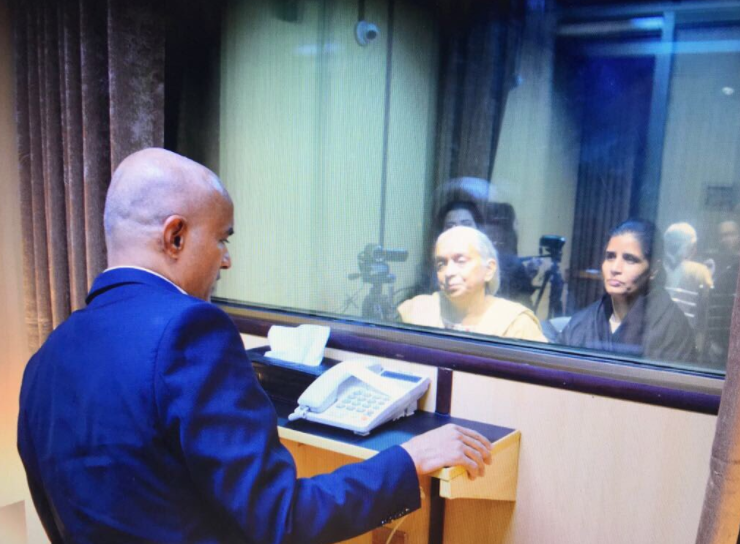 New Delhi: For the first time since Kulbhushan Jadhav was taken into custody by Pakistan one year and eight months ago, the former Indian naval officer met his wife and mother for about 40 minutes in the presence of an Indian diplomatic officer in Islamabad on Monday.

Just as Pakistan’s joint investigation team was wrapping up a unprecedented visit to to Indian air force attack that was attacked by six terrorists, Pakistan last year announced that it had captured Jadhav after he illegally entered Pakistan from Iran. India denied Pakistan’s claim that he was a serving Indian defence officer, asserting that he had retired from the Indian Navy. India also claimed that Pakistan had kidnapped him from inside Iranian territory. The Pakistani side said he was carrying an Indian passport with him made out in the name of Mubarak Patel.

In April this year, a Pakistani military court sentenced Jadhav to death on the charge that he was the mastermind behind the alleged ‘terror’ activities of India’s intelligence agencies in Pakistan. Subsequently, India took Pakistan to the International Court of Justice for violating the Vienna Convention on Consular Relations by denying consular access to Jadhav.

The UN’s principal judicial organ ordered a stay on the execution till its final judgment. Both India and Pakistan have given their written pleadings and dates for the next round of oral hearings have now to be announced.

Last month, Pakistan said that it was willing to allow Jadhav’s wife, Chetana, to meet him. India asked that his mother, Avantika, also be allowed, since her request for a visa had been pending for a long period of time.

Pakistan agreed, and while negotiations over protocol went on, the date was set for December 25 – Christmas day, as well as the birth anniversary M.A. Jinnah – which was used to score propaganda points.

Pakistan permits the meeting of wife and mother of Commander Jadhav with him, as a humanitarian gesture, on the birthday of the Father of the nation, Quaid e Azam Muhammad Ali Jinnah.

The two women reached Islamabad around noon on an Emirates flight via Dubai. The entire city of Islamabad had been put under a heavy security cordon and key roads closed to allow for the unimpeded flow of the convoy that transported them.

The mother and wife of Commander Jadhav sitting comfortably in the Ministry of Foreign Affairs pakistan . We honour our commitments pic.twitter.com/hILiMyp7Zl

They were taken inside and underwent a security check. The Pakistani foreign office spokesperson tweeted a picture of the wife and mother sitting on a sofa before the meeting began.

The meeting in jail began at 2.18 local time in a specially prepared room. A glass barrier separated Jadhav and his kin to ensure that there was no physical contact. The communication took place through a phone intercom. A box of tissues was kept besides both the phones.

Additionally, a digital clock was kept on the table in front of the wife and mother.

On Jadhav’s side, there was a large wall clock which kept track of the time. The Indian official could watch, but not listen, to the proceedings – as he was behind a further glass barrier.

The meeting was scheduled for only 30 minutes, but as per the Pakistan foreign office spokesperson, Jadhav requested an additional 10 minutes, which was granted.

Meeting between Commander Kulbushan Jhadev & his family in progress pic.twitter.com/THG925V1fO

No details of the meeting were given out by both sides.

Pakistani and Indian officials however confirmed that this was not the “consular access” to Jadhav that India has been seeking.

“This meeting was not consular access… as (the Indian) diplomat was told that he could be present, can see the meeting. if we went one more step forward, it would have gone into sphere of consular access,” said Pakistan foreign office spokesperson Mohammad Faisal.

He added that the meeting has nothing to do with the case pending before the International Court of Justice or with politics. In a TV interview on Sunday, Pakistan foreign minister Khawaja Asif had said that the meeting between Jadhav and kin, in presence of Indian official, could be construed as “consular access”. This was denied by Pakistan foreign office on Monday morning and later during the briefing by the spokesperson.

“As Jadhav’s wife and mother were leaving, they thanked Pakistan, the Foreign office, me, my team… They were satisfied with the meeting,” said Faisal.

He added that Pakistan had wanted  Jadhav’s kin to address the media, which was not accepted by India.

“We had formally proposed this to India. This was done in the spirit that Pakistan has nothing to hide and like all of you seeks answers to many questions that remain unanswered. However, the Indian side requested that they wanted to avoid media interaction. Hence, I speak today without the presence of the mother and wife in due deference to the Indian request,” he said.

The Pakistani foreign office spokesperson added that “this does not have to be the last meeting” with the family of Jadhav.

At the start of the briefing at the Pakistan foreign office, a small video – which seemed to have been recorded earlier – was played, in which Jadhav thanked the Pakistani government for the “grand gesture”.

The Pakistani government also showed a slide of a medical report which apparently certified that Jadhav was healthy and did not have any major injuries. The check-up was apparently done on December 22 and the report was signed by a German orthopaedic doctor, Dr Uwe Johannnes Nellessen from the Dubai-based Saudi German hospital.