The MEA has accused Pakistan of attempting to "bolster a false and unsubstantiated narrative of Jadhav’s alleged activities." 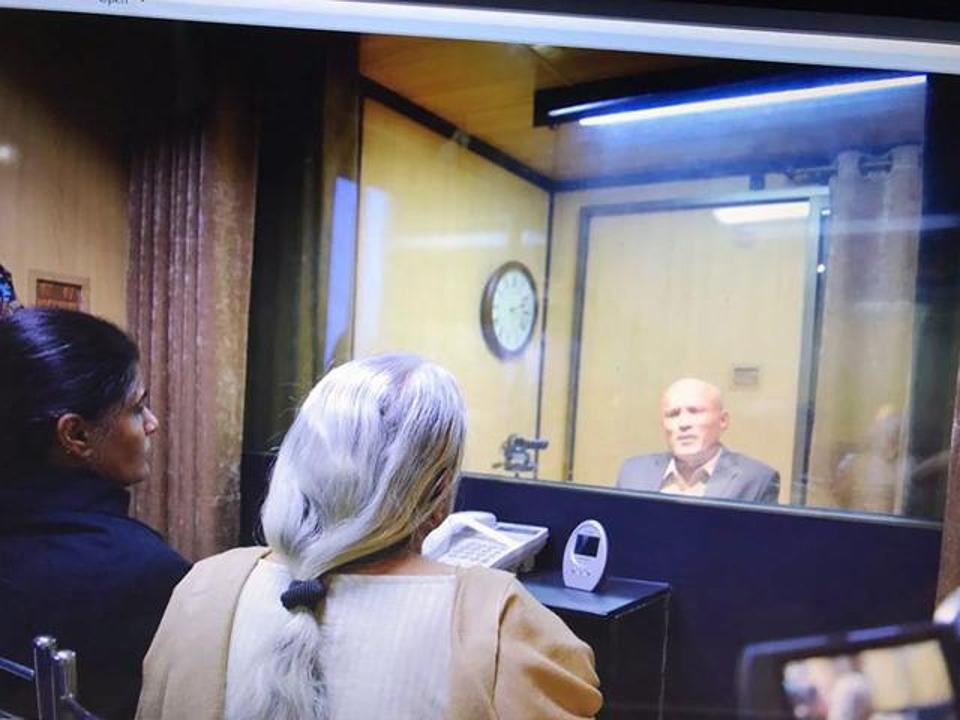 New Delhi: Stating that Kulbhushan Jadhav – the former Indian naval officer convicted by a Pakistani military court of espionage and terrorism – was under “considerable stress” and “clearly tutored”, India on Tuesday accused Pakistan of violating the “letter and spirit” of the “understandings” reached on the conduct of the meeting with his wife and mother., which took place in Islamabad on Monday. This includes stopping them from communicating in Marathi, forcing them to change their clothes, not letting the accompanying Indian diplomat listen to their conversation, and even confiscating the wife’s shoes.

On December 25, Jadhav’s wife, Chetana, and his mother, Avantika travelled to Islamabad, where they met with him for 40 minutes in a room behind a glass barrier. The meeting was arranged after Pakistan offered a visa for the wife to meet Jadhav, who has been in Pakistan’s custody since March 2016.

Pakistan has described Jadhav as a serving Naval officer who works as a spy for India’s external intelligence agence, the Research and Analysis Wing (RAW). India has strenuously denied the allegations, asserting that Jadhav had retired from the Indian navy, was working on his own in Chabahar, Iran, and had been picked up by the Pakistanis or their proxies from inside the Iranian territory.

Jadhav was sentenced to death by a military court in April, but the execution was stayed by the International Court of Justice based on India’s plea against Pakistan.

A day later, India’s external affairs ministry said that Pakistan had “violated” agreements on how to conduct the meeting. “There were clear understandings between the two sides and the Indian side scrupulously abided by all its commitments. However, we note with regret that the Pakistani side conducted the meeting in a manner which violated the letter and spirit of our understandings”.

India said that the “manner in which the meeting was conducted and its aftermath was clearly an attempt to bolster a false and unsubstantiated narrative of Shri Jadhav’s alleged activities”.

“You would all agree that this exercise lacked any credibility,” the communique added.

The Ministry of External Affairs further said that the “the overall atmosphere of the meeting was intimidating insofar as family members were concerned”. “Family members, however, handled the situation with great courage and fortitude”

India listed four specific violations of mutual “understandings” on the protocol for the meeting:

The Pakistani foreign office had released photographs of the meeting even before it had finished. The pictures showed Jadhav and his wife and mother separated by a glass barrier. There was a phone in front of both of them, whose intercom was used to convey messages. The meeting took place in a container prepared and transported to the Foreign Office building for this purpose only.

India’s statement that two women were forced to change their clothes and remove their  jewellery explains the visible change in their attire when the duo arrived at the foreign office. They had earlier been photographed at a meeting in the foreign ministry wearing a different set of clothes. Since the two women were not carrying a luggage, there was a set of clothes kept in the foreign office for them – a detail which was never mentioned to India, said sources.

A shawl that the women had brought from India for Jadhav was reportedly taken by the Pakistani authorities for security clearance.

While the media was kept away when they arrived in Pakistan, journalists were allowed to stand in a designated spot inside the foreign office premises. This meant that when the two women were outside the building and standing in the driveway waiting to leave, the waiting Pakistani media shouted questions, for example asking Avantika Jadhav whether she had any objection to being called the “mother of a murderer” and whether she agreed with her son’s confession.

The leading Pakistani newspaper Dawn reported that as Jadhav’s mother and wife were waiting for the vehicle, “they were bombarded with harsh questions from the overzealous press corps”. “The two women did not react, but the Indian diplomat was visibly perturbed and could be seen, even from a distance, protesting the way Jadhav’s family had been exposed to the media glare,” the Pakistani newspaper reported.

The Pakistani government had proposed that the two women address a media conference, but it was rejected by the Indian side.

During the meeting, India alleged that they were not allowed to speak in Marathi, even though it was “natural medium of communication”. The Pakistan foreign office official present at the meeting, Fariha Bugti, reportedly kept on cutting off the conversation if the mother spoke in Marathi, according to the officials. The wife reportedly spoke very few words, but did shed a few tears.

Jadhav apparently largely spoke in Hindi and English during the meeting. There were more than two cameras which were recording the conversation.

India had wanted an official to be present at the meeting and deputy high commissioner J. P. Singh had been the designated representative.

As seen in the photographs released by Pakistan, he was clearly positioned much beyond the room behind an additional barrier, which did not allow him to hear much of the conversation. India has further claimed that the meeting had begun even without his presence and he was allowed to witness “only after pressing the matter”.

The Indian government also brought up the matter of the shoes of Jadhav’s wife, which are now in Pakistan.

“For some inexplicable reason, despite her repeated requests, the shoes of the wife of Shri Jadhav were not returned to her after the meeting. We would caution against any mischievous intent in this regard,” said the MEA’s press release. There was apprehension here that Pakistan could claim that the shoes had been used for further espionage activities by ‘planting’ devices.

After leaving Pakistan on Monday evening, the wife and mother reached Delhi via Muscat late in the night. They met with the external affairs minister Sushma Swaraj at her residence on Tuesday where foreign secretary S. Jaishankar was also present.

In the press release issued on Tuesday afternoon, the Indian foreign ministry alleged, “From the feedback we have received of the meeting, it appears that Shri Jadhav was under considerable stress and speaking in an atmosphere of coercion”.

Dismissing the medical certificate released by Pakistan, India noted, “His appearance also raises questions of his health and well-being.”

Jadhav’s mother apparently told the Indian side that he looked and behaved differently. She noted that Jadhav had “puffed cheeks and face” and did not seem like his own self.

Avantika apparently asked her son about a bruise visible on his head, but Jadhav did not reply.

Pakistan had claimed that a check-up by a German doctor on December 21 showed Jadhav to be healthy and unmarked.

Following India’s statement, New Delhi is waiting to see how Islamabad would react to the strong criticism. There is expectation that Pakistan will release either an audio or video ‘recording’ of the meeting.

So far, India has not issued a demarche to Pakistan or summoned the ambassador, but it cannot be ruled out in the future, said sources.

Late Tuesday night, the Pakistan foreign office issued a statement, which expectedly, dismissed all the Indian accusations about the meeting.

“The Indian baseless allegations and twists, that come 24 hrs later, about the visit of the wife and mother of Commander Jadhav, a convicted terrorist and spy, who has confessed to his crimes, are categorically rejected,” said the Pakistani foreign office spokesperson Mohammad Faisal.

He stated that Pakistan did not wish to “indulge in a meaningless battle of words”. “Our openness and transparency belies these allegations”.

The spokesperson added, “If Indian concerns were serious, the guests or the Indian DHC should have raised them during the visit, with the media, which was readily available, but at a safe distance, as requested by India”.

India had, however, claimed that the Pakistani media was allowed to “harass and hector them and hurl false and motivated accusations about Shri Jadhav”.

“The fact is that Cdr. Jadhav’s mother publicly thanked Pakistan for the humanitarian gesture. This was recorded by the media. Nothing more needs to be said,” said the Pakistani spokesperson.

Incidentally, the mother and wife only greeted the media with folded hands after they arrived at the foreign office before their meeting with Kulbhushan Jadhav in prison. They didn’t say anything once they left the meeting and were waiting for the car. It was the Pakistani spokesperson who had said at the media briefing that Avantika Jadhav had expressed her appreciation for the Pakistan government and the foreign office.

How the Pakistani media is reporting the meeting

Pakistani media reports of the meeting highlighted that it was arranged as a “humanitarian gesture” and that more such meetings could be held in the future, as noted by the foreign office spokesperson. It was the main story on the front pages of all the Pakistani newspapers, whether English or Urdu. They all referred to Jadhav as the “Indian spy” and that his death sentence was “subversive” and that he was involved in “terrorist” activities in Pakistan.

The reports also highlighted that Pakistan had confirmed that the presence of the Indian official did not mean that this meeting was automatically categorised under the provisions for “consular access”.

The headline in The News was, ‘India returns Jadhav gesture by martyring 3 soldiers on LoC’. This was a reference to the death of three Pakistani soldiers due to cross-border firing on Tuesday evening – two days after four Indian soldiers died in Rajouri district.

The Pakistan foreign office on Tuesday summoned the acting Indian deputy high commissioner over the killing, but denied that Indian forces had crossed the Line of Control.

Under the top story with headline “Jadhav thankful but Pakistanis feel hurt”, The Nation article said, “The VVIP protocol extended to Jadhav’s family members invited criticism from many Pakistanis – who believed that the killer of several innocent people did not deserve any kindness”.

A front page commentary carried in the same paper noted that most Pakistanis did not want Jadhav to be “let out like the notorious American Raymond Davis through a backdoor deal”. The writer said that it would be difficult to make such a deal as the military court had sentenced Jadhav to death. “The civilian governments wouldn’t dare venture into that domain. It can be suicidal”.

The Express Tribune noted that questions had been raised in India about Pakistan recording the meeting. “Foreign office officials, however, made it clear that the Indian government was informed well in advance about the protocol,” said the Tribune report. There was no recording done by the Indian side.